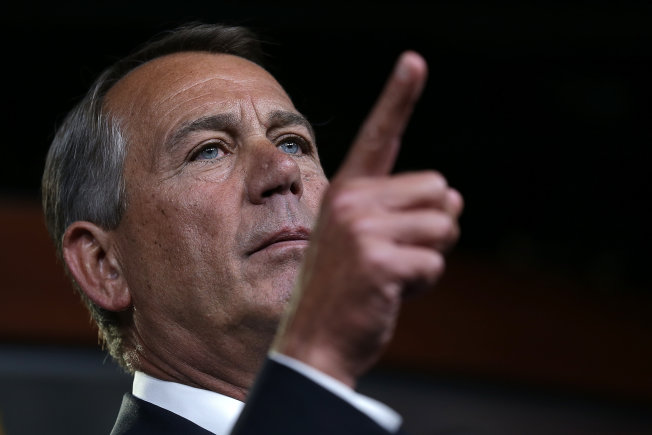 Today House Republicans, in the face of a possible government shutdown, are prepared to punt once again on our budget problems by passing a continuing resolution, this time until September 2015.  In order to combat Obama’s unilateral Amnesty-Lite, the House is prepared to only fund the Department of Homeland Security until March 2015.

Make no mistake – this enables Obama’s Executive Actions on illegal immigration to stay in full force as the most important portions go into effect January 1, 2015.[read_more]

Although Obama announced a series of “Executive Actions” on November 20, 2014, and supposedly signed these into law at some public ceremonies on Friday November 21, 2014, the most problematic portions were never signed by Obama.  The Secretary of DHS, Jeh Charles Johnson, on November 20, 2014, published (one of a number of) guidance documents [“Memo”] for DHS governing the decision making process for enforcement of immigration laws and granting of deferred action.  Deferred action is a temporary reprieve from deportation.

The Memo contains the non-comprehensive amnesty program Obama described in his various press events in late November.  This program (allegedly) allows for approximately 5,000,000 illegal immigrants to apply for and obtain a three year deferred action on deportation,

Work authorization converts an illegal immigrant into a legal worker, with a social security number.  Due to the way the IRS treats immigration status, all aliens, regardless of legality are considered “resident aliens” if they live in the U.S. the majority of the year.  Resident Aliens are taxed the same way as citizens with a huge caveat: you must have a Taxpayer ID# (SSN) in order to report your income, or claim someone as a dependent.  Work authorization will give millions of illegal immigrants legal status before the IRS allowing for access to numerous tax incentives and subsidies such as the EITC.

In order to placate conservatives the House will only pass a plan that funds DHS through March.

There is NOTHING preventing house Republicans from passing a temporary authorization that prohibits the spending of any funds that would grant work authorizations to illegal immigrants.

The Memo that goes into effect on January 1, 2015 will have two months to wreak havoc in a manner that will not be undone by legislation passed March or later as there are insufficient votes to revoke the “rights” DHS will have already granted.  Speaker Boehner will have told the grassroots that they did all they could, and he will be lying.

Tell your Virginia Republican members of Congress to not vote for any budget funding DHS that allows the spending of funds in furtherance of Obama’s Executive Amnesty.

Speaker Boehner is about to temporarily allow Obama’s executive amnesty (While telling you he isn’t) was last modified: December 9th, 2014 by Paul A. Prados
Barack ObamaCRomnibusillegal immigrationimmigrationJohn Boehner
24 comments