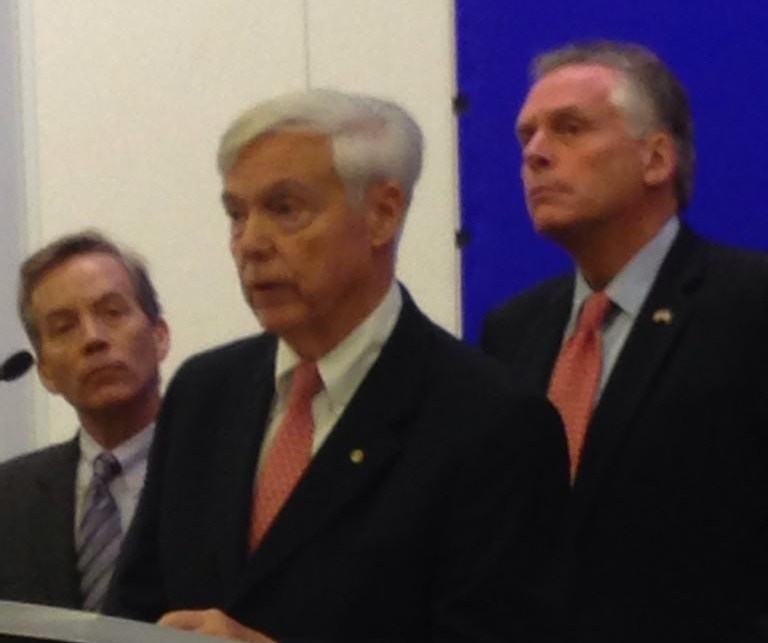 Delegate Joe Morrissey was reelected with a plurality of votes as an independent in a three way race Tuesday while holding a victory party in his jail cell.  Despite all his protestations, Speaker William Howell set up this catastrophe back on December 18, 2014 in a private deal brokered with Del. Morrissey.[read_more]

Background for the deal

Speaker Howell brokered a deal that benefitted Morrissey that he did not have to make.

Morrissey entered his plea on Friday December 12, 2014.  In that plea, Morrissey admits only that the government has enough information to convict, but vehemently denies that he did anything illegal.  The calls for Morrissey to resign (Democrats included) were deafening.  Morrissey scrambled to determine the safest course of action to rehabilitate his reputation.  He knew that when returning to Richmond in January he would be shunned by his own caucus, and likely removed from office.  Morrisey wanted a referendum from the voters to confirm they still want him despite knowing of his “false” accusations.

He needed to be assured of victory, and he needed victory to occur before being forcibly removed from office.

Speaker Howell wanted Morrissey out. A legislator representing constituents from a jail cell would make a mockery of the General Assembly Session.  Obtaining Morrissey’s resignation on any terms may have appeared to be the best option available to him.

UpdateX2: Paul Goldman confirmed that Speaker Howell was not told that Morrissey would run for election in the special election.

Part of the deal was to have the nominating method within a matter of days.  The time frame for nominations required completion of the party nomination within five calendar days of the date of the resignation.  Morrissey expected to stack the local nominating process, and with the Democratic nomination easily win the special election.  This part of the plan went horribly awry for Morrissey.  But the timing of the nomination method was a mandatory element of the deal brokered between Morrissey and Speaker Howell.

How do we know this was a deal brokered between Morrissey and Speaker Howell?

The proof of the deal

The proof stared reporters right in their faces on December 18.  In their haste to announce Morrissey’s resignation, they glossed over a particular line from the resignation letter implicating the existence of the agreement between Morrissey and Speaker Howell.

Pursuant to your recent discussions with Mr. Goldman, this resignation will take effect on the day of the special election, January 13, 2015, (Emphasis Added) 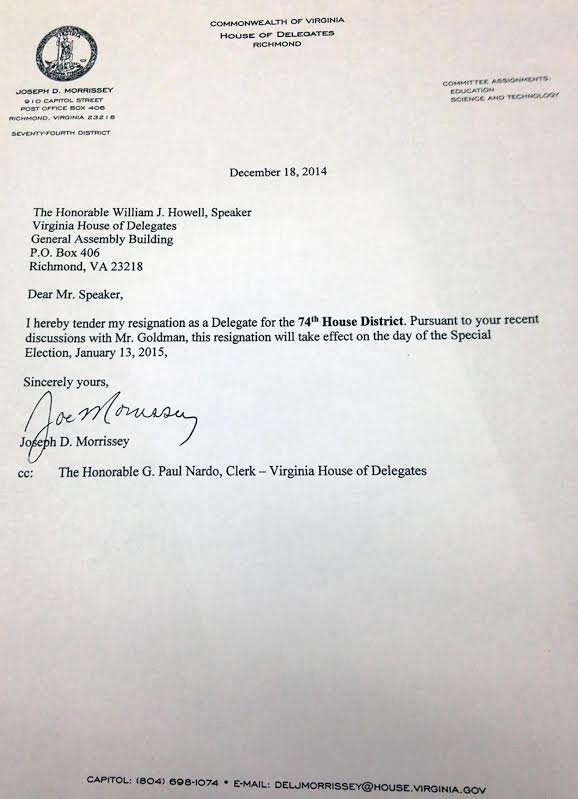 Mr. Goldman is Paul Goldman, Joe Morrissey’s law partner.  Morrissey knew when he resigned when the special election would be, because he worked it out with Speaker Howell in advance.  Mr. Goldman, when I confronted him with the exact language of the resignation letter, admitted that the conversation occurred between him and Speaker Howell, but stated that the terms of that conversation were “confidential.”  There is no doubt that a deal was made, and that deal contains, in part, the timing of the special election.

Speaker Howell did not have to make a deal at all 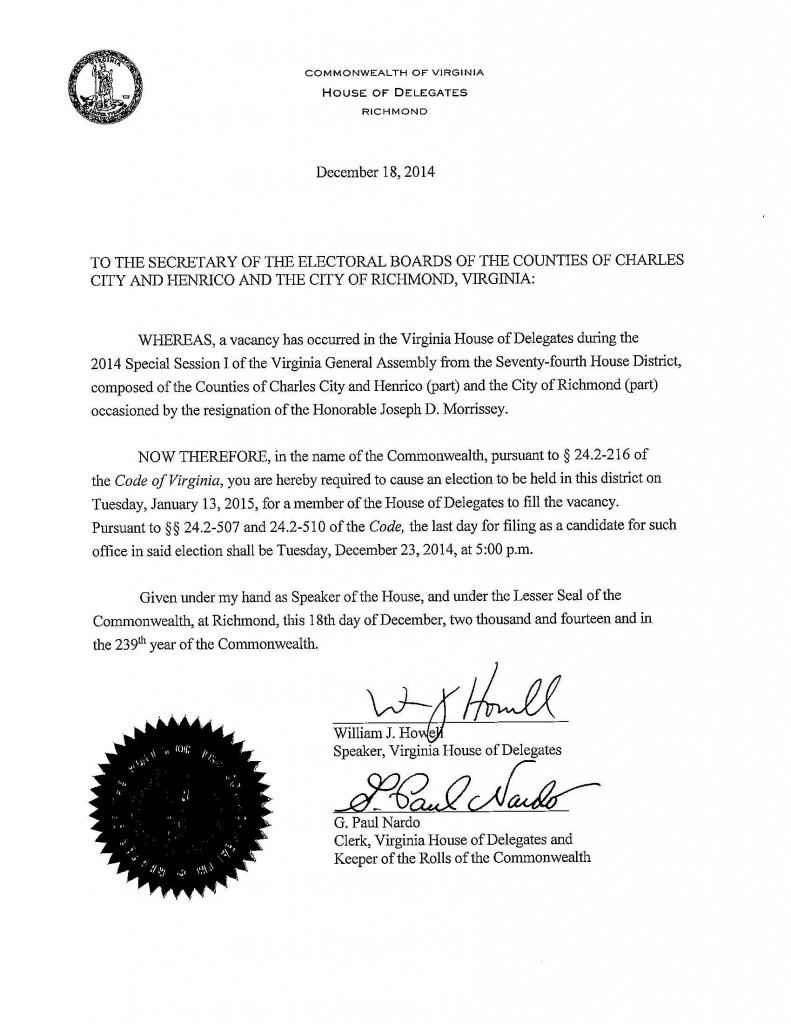 Even if Morrissey did not know about the case law cited in “Did Morrissey Outsmart the Democrats,” I firmly believe based on my interactions with Morrissey and Mr. Goldman that they think that the special election immunizes Morrissey from removal due to prior bad acts.  In the least, Morrissey is in a much stronger position to avoid forcible removal than he was on December 12, 2014 when he entered his plea.  It is clear that Morrissey wanted the special election on January 13, 2015 even after the botched Democrat nomination process.

The righteous condemnation of the Speaker

Mr. Morrissey’s decision to run in this election is deceitful, selfish and disrespectful to this institution and the people he supposedly desires to serve. This is a despicable, arrogant political stunt that should disgust each and every citizen of Virginia. The people of the 74th district deserve better than this and the obligation now rests with them to retire Mr. Morrissey permanently.

Mr. Morrissey’s election tonight does not change the fact that his actions fall grievously short of the standards of a public servant in the House of Delegates. As Speaker, I have an obligation to faithfully and impartially discharge my duties as presiding officer and a responsibility to protect the honor and integrity of the House of Delegates as an institution…Working with House Minority Leader David Toscano and other members of the House, we will begin the process of assessing these options in order to determine the appropriate path forward.

The fallout from the deal

This is an election year.  Conflict with a Democrat legislator convicted of sex crimes with a minor is not a losing issue for Republicans.  Speaker Howell could have stood his ground and demanded Morrissey’s resignation with no strings attached.  Speaker Howell did not foresee that Morrissey would run in the special election.  If Morrissey refused, the House could have removed Morrissey with overwhelming support.  Upon removal Morrissey would have been in a much weaker position to claim he is qualified to hold public office pursuant to a subsequent special election.  Instead, Morrissey received his special election on January 13th which, as he predicted, he won, and he likely has strong additional legal arguments against his forcible removal from the General Assembly.  UpdateX2:  This all happened even though Speaker Howell did not know he was assisting Morrissey in his plan.

Speaker Howell’s office confirmed again that they are still looking at their options to preserve the integrity of the House.

A classic Morrissey comment. The triple reverse race card with a suplex. “I’ve played the hand that was dealt me. And now you’re going to say to the folks in the 74th District that you’ll make the decision who serves. I think not. Mine is a minority-majority district that’s subject to the Voting Rights Act.”

What a disgrace Virginia politics has become the last decade. As a native with ancestors that have been here since 1635, I’m disgusted by what my native Commonwealth has become.

That resignation letter is very odd. If the resignation doesn’t take effect until January 13, 2015 how can you call for a special election for a vacant seat? The seat isn’t vacant. It’s still occupied.

It was very odd. I looked into this back on December 18 and felt that this was one of those situations where the law requires something (actual resignation) but no one realizes or cares. If Speaker Howell had stuck to his guns he could have demanded immediate resignation so he could call the special election.

Astonishing. Regarding the insulation against past bad acts by virtue of a resignation and new election, Sen. Chap Peterson says in today’s Washington Post ““I don’t think they can expel him based on crimes committed prior to being elected,” said state Sen. J. Chapman “Chap” Petersen (D-Fairfax), who said he has looked at case law and predicted a lawsuit if the House pursued expulsion.”

my casual perusal of the scant pertinent case law leads me to agree with Sen Peterson. but a judge might see it differently. but the GA does not want this to go to court.

look, Paul Goldman is a master.

Do we need “the Stimpson people” to say anything to know bill howell is a sell-out low-life tyrant?

Ah, Kelly, didn’t you just say it for the Stimpson people?

Per the updates: Speaker Howell thought he was accepting a resignation and making sure the citizens of Morrissey’s district had continued representation. He did not know that Morrissey was going to immediately turn around and run for the same office.

I agree it looks like he was thoroughly played by a guy sitting in the county jailhouse. Difficult to see a clearer message to have a heads up and tread carefully.

Because there is no break in service, he arguably did not lose his seniority. All legislators who are reelected see their term end and are sworn in on the first day of the new session. The only difference here is that Joe has no effective way to challenge the seniority issue. He can sue over expulsion, but not seniority.

I can’t say I would have done things any differently than the Speaker. He acted consistent with past practice in having a special election prior to the session to get the seat filled and have the district represented. Even if he thought there was a chance Morrissey would run and win, at least this gave them the best chance of not having to seat Morrissey at all.

That said, I see Paul’s point about making it more difficult now to remove him, but I think that’s still in the cards and would be surprised to see Morrissey survive the next week in the House.

Come next November, the odds are greatest that there will be a Joe on the 74th ballot, and a Susan on the the 28th ballot.

I, and others like me, are never going to let go of HB 2313, not a chance. If we cannot have a Conservative, the least we will accept is a Republican.