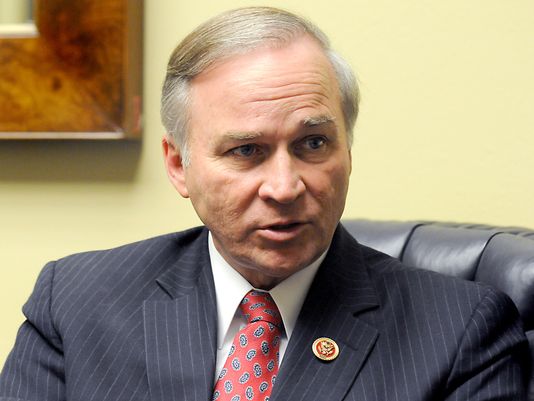 According to Del. Scott Taylor, who was being interviewed by Fredericks, a deal was in the works to tweak the boundaries of the 2nd and 4th Congressional districts to put Republican 4th District Rep. Randy Forbes into the 2nd District. The idea here is to smooth Forbes’ path to succeed retiring Rep. Scott Rigell. In exchange, according to Taylor, Forbes is offering to have the Virginia Republican Congressional delegation drop its legal challenge to the court-ordered redistricting that made Forbes’ 4th District much more difficult for a Republican to win.

Taylor cited three sources for his proposition that such a deal has been in the works: a senior Republican lawmaker, a “cabinet level” official in the Governor’s administration, and the Governor himself. Fredericks, in a post on The Bull Elephant, later expanded on what was revealed in the Taylor interview, citing other sources who indicated that Forbes had personally pitched the deal to members of the General Assembly, and that senior Democratic Sen. Don McEachin was receptive to it. (It is my understanding, from a separate source close to the General Assembly, that McEachin’s role was supposed to be to sell the deal to the Governor’s people).

Taylor then released a statement recapping what he revealed on Fredericks’ show that morning, and identifying former Rep. Tom Davis (who now serves as a lobbyist) as the Forbes surrogate who had approached the McAuliffe administration.

After publication of the story on TBE, reaction was swift…and telling.

First, Davis issued a statement straining credulity when he implied he was acting completely on his own initiative. But wait…that’s not what he actually said, is it? No, he used weasel words to make people think that’s what he meant. He said, “Randy was not involved and we had no direct discussion,” which leaves open the possibility of indirect involvement by Forbes, or direct involvement by other players. If he wanted to really set the record straight and tell people he acted completely on his own initiative, he could have said so, but didn’t.

I, for one, find it very hard to believe Davis would contemplate proposing to the Governor that the GOP delegation would drop its legal challenge in exchange for tweaks to the district boundaries without him first having spoken about it with one or more members of the delegation.

Second, McEachin said he does not know Tom Davis (as if that’s relevant to anything) and that he “did not meet with Randy Forbes during this 2016 General Assembly session.” It does not take a particularly astute reader to observe that he did not deny the existence of a deal, or his role in it. Instead, he seized on one perceived inaccuracy and trusted that his tone of outrage and denial would deflect the broader story.

Third, a spokesman for Rep. Forbes issued a statement spinning the issue back towards his putative rival, Del. Taylor, by saying:

Again, no denial of what Fredericks reported about Forbes’ involvement in the deal and lobbying members of the General Assembly for it.

Finally, a clumsy critique of our journalism issued from the usual green-eyed sycophants, claiming that what we had published at The Bull Elephant was a coordinated effort with Del. Taylor. I don’t expect sophisticated analysis and keen observation from such quarters, but if I did, I might expect an understanding that most folks at TBE don’t rate Del. Taylor high on their list of favorites. Most of us are probably more of the Pat Cardwell type, though if one can judge a candidate by the enemies he makes, Taylor’s stock is rising. More importantly, this is a story that TBE contributors have had leads on for the better part of two weeks; Taylor’s revelations on the radio yesterday merely provided the necessary confirmations for us to give the story the green light.

In conclusion, this is a real story, and an important story. One can debate the wisdom of this apparent deal (or, at least, attempted deal) from both the Republican and Democratic perspectives. That’s not my purpose here, though from a purely partisan standpoint, I think this is a good thing for the GOP.

However, the prospect of such an arrangement involving senior figures in Washington, the General Assembly, and the McAuliffe administration certainly merits more coverage. Yesterday’s torrent of false denials speaks for itself in this regard.

UPDATE: This is apparently an insignificant, un-newsworthy story that no one should care about, or even have any interest in whatsoever. So much so that my friend and Tom Davis ally Brian Schoeneman penned 600+ words on a Saturday afternoon to convince you. (He had the minimal good manners to link to that which he criticized, so we return the courtesy here).

According to Brian, because there is a $19 trillion debt and other pressing and important problems, no one cares about who their next Congressman will be, or how he or she will be chosen. Besides, we all know politicians make back room deals all the time, so nobody cares.

I know I speak for my colleagues at TBE when I say that we’ll keep on believing that this kind of thing matters and should be covered, especially when other outlets would rather sweep it under the rug. I thank Brian for providing this clear contrast in our approaches.

My mistake, Danielle. Thanks for pointing it out. Fixed now.

I didn’t know if it was a poke at the current situation or an error. I found the former quite amusing. 🙂

Scalia has passed away, this is horrible. Would love to see if McConnell will truly wait til the next President is elected, to confirm the successor. Ken Cuccinnelli would be a solid choice.

Yes he very much would make an excellent pick… McConnell says he will not confirm an Obama pick but we shall see. He can show he is serious by having pro forma sessions next week so that Obama can’t make an interim appointment.

Wait! You want the Cooch to be a US supreme court justice? Does ASW stand for Always Smoking Weed?

Davis is a lobbyist. Who’s his client? How does this impact the current federal ruling?

Good questions. Who asked Davis to act on their behalf? Who made Davis a spokesman?

He runs US Federal Government Affairs at Deloitte. The real question is who isn’t his client…

Then maybe he should stick to Federal Government affairs instead of trying to cozy make back door deals with state governors.

Tom has never had the best luck with statewide ventures, he should stick to what he knows

Droll but so, so true.

Oh what a tangled web we weave. Integrity where art thou?

Not with Forbes, Davis, or the people squawking that this is made-up, that’s for for sure.