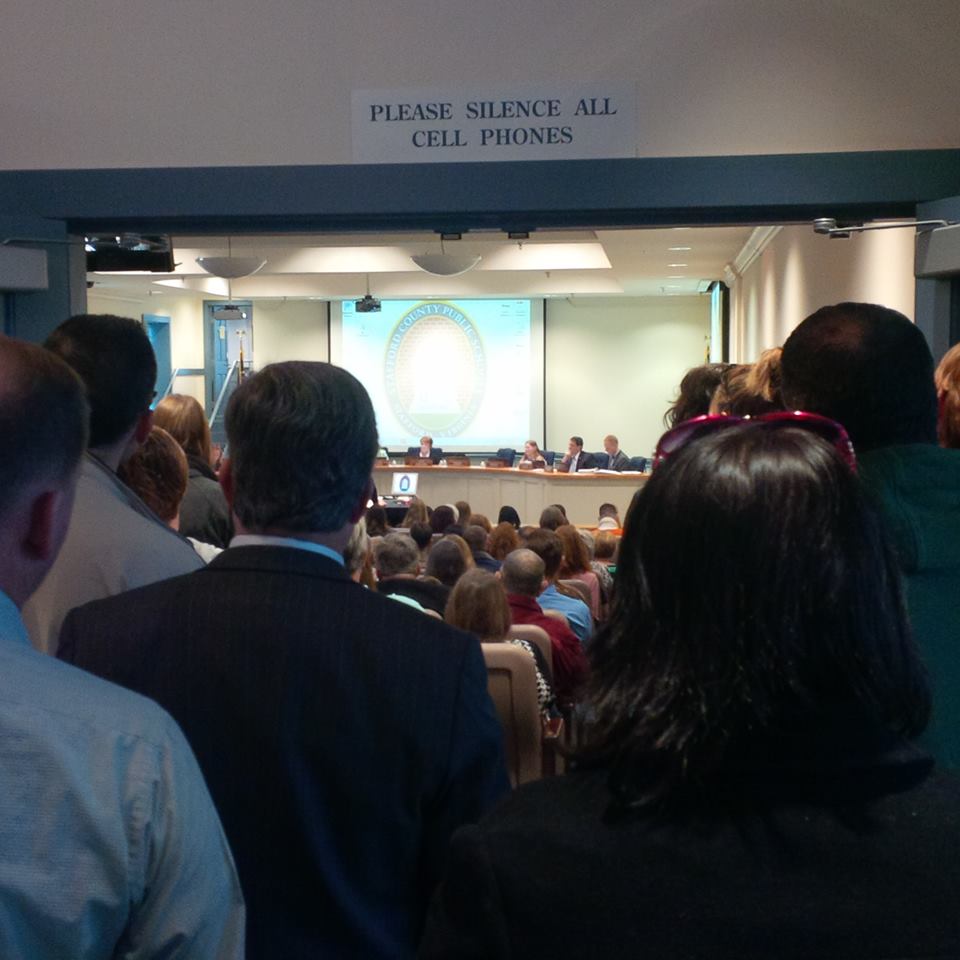 In a 6-0 vote Stafford County School Board voted to require a transgendered child to use a single stall bathroom, a staff bathroom, or the bathroom that matches his biological gender.[read_more]

The School board meeting was packed, standing room only. The overwhelming majority of people did not want boys who dress as girls to be allowed to use girls’ restrooms or locker rooms. Four speakers spoke out against changing the policy of allowing students to use the bathroom of the opposite sex if they believe they are the opposite sex. Fifteen parents spoke against the policy, some saying their children would have to leave the schools if the policy remained in effect.

The father of the little boy who dresses as a girl referred to his son as his daughter,

I have many of the exact same beliefs that many of you do,” Jonathon Adams said to those who opposed the school system’s initial action. “I was astonished. And then I watched my little girl grow up. I’m very proud to have a special little girl. I don’t mean just on the outside.”

Curtis Lineweaver, a parent leader opposed to the policy said,

The perception in the community is that the school board is throwing away the rights of many children for the wants of some confused children”.

It is very detrimental and confusing to a child to have parents who encourage this cross dressing behavior. How sad for a child to not have parents who teach him what his gender is and what is appropriate for his gender in the family and in society.  How sad that these parents want their son to pretend to be their daughter. With parents like this is it any wonder the child is confused about his gender identity?  They are setting up this child to have a very difficult, confused, and painful life.  It’s very sad that they would do this to their child and very sad that our society allows them to do this to a child. It’s abusive.

Thank goodness decency and common sense have prevailed…for now. Unfortunately this won’t go away. How long before the lawsuits begin?

Back when I worked at Virginia Tech, there was a gay (self-identified) graduate student who I only knew at the gym and he got mad at me for questioning the validity of something in his social-studies dissertation work. So he’d come to my locker and vigorously towel off his talleywacker (that’s what grandma called it) while facing me from about 3 feet away, telling me about his previous night’s “rough sex.” The first time he did it, I made my disappointed face and said, “Oh, come on…” But he kept doing it every time we were in the locker room . Finally all I could do was just laugh and tell small penis jokes.

I remember thinking at the time that if trends continued, the ladies would be facing (no pun intended) the same thing in their locker rooms, and from biological males. Not sure how the clash of gender-identity conflict with campus sexual assault rules would play out. Guess we’ll eventually find out…

And on Wednesday, David McKissack taught us all the word “tallywackers” and that his Grandma used the term, and told a bizarre story in the comments section of TBE.

You have a valid point, but I curse you for the imagery…

I’m a giver, Paul. Please be sure to spell it properly, or people will think you’re uncouth.

So how is that different from what straight guys do in the locker room? You know, aside from the sex being with a guy.

But yeah, simplest solution is that until we stop putting urinals in men’s rooms, which one you use should be based on your biological gender.

Max — yes, guys do goofy stuff in locker rooms, but in most instances it’s meant to be funny, not threatening and not done in an angry, aggressive “f*ck you” way.

The gay guy got a pass from me because he was gay. As someone who’s followed media and university bias with regard to protected minorities — and as someone who was staff, not tenured faculty — I was very much aware of the costly and uphill battle I might have to endure if I responded in a firmer manner, especially if the situation had escalated beyond words.

My point was that opening bathrooms and locker rooms to both sexes will very likely create similar problems.

I think the problem isn’t so much the sharing of bathrooms with different sexes as it is the immaturity of some people and the politics of the situation. If it wasn’t for the gay political lobby giving that guy cover, he probably wouldn’t have done what he did and if he did, you could have dealt with it appropriately without having to fear serious repercussions.

Agreed, and in my experience far more gay people are like Ellis — not seeing sexuality as a political thing — than are like the “lobbying world,”

Who did not vote? And way.

One member was absent.