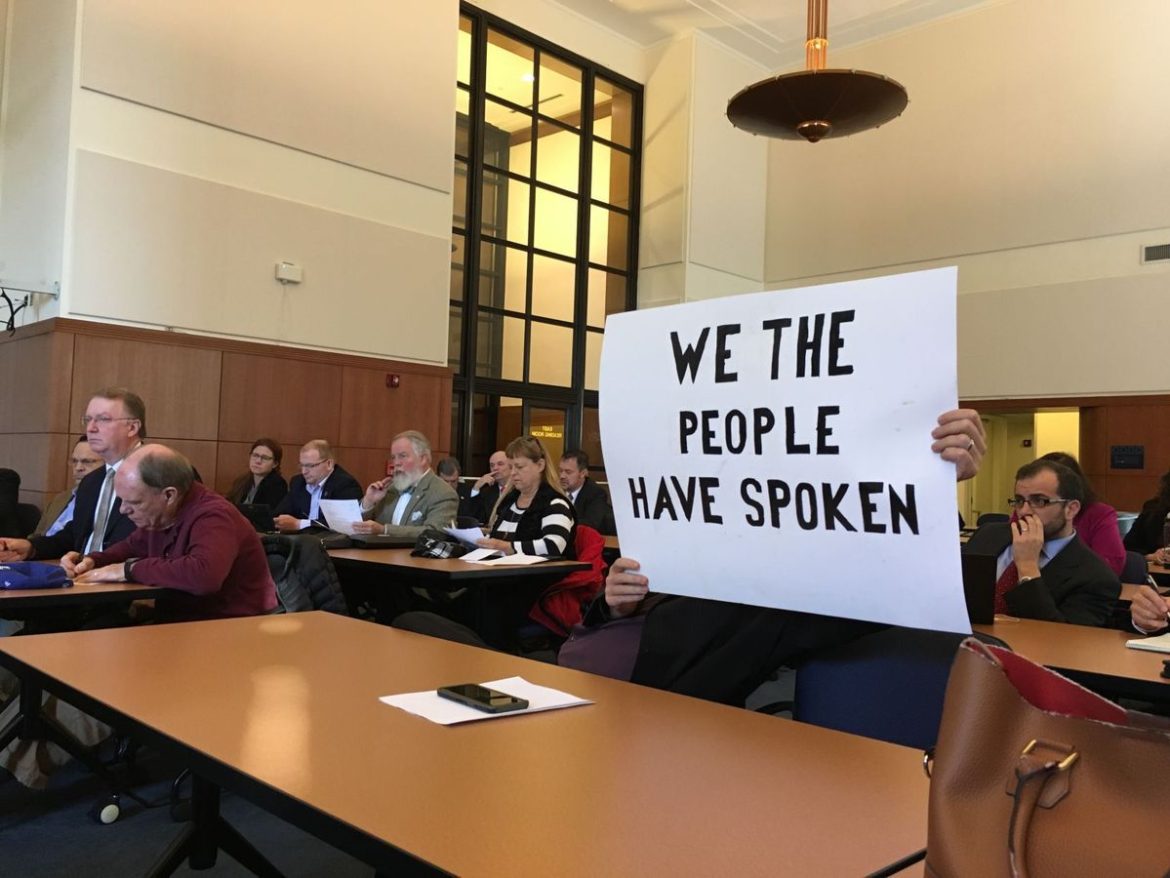 Brandon Howard, chairman of the Hopewell Republican Committee, held up a sign at a Nov. 20 meeting of the State Board of Elections to protest a possible delay in certifying election results. (photo credit:Graham Moomaw Richmond Times-Dispatch)

The Virginia State Board of Elections refuses to certify the votes in two House of Delegate districts, the 28th, and the 88th. Virginia Department of Elections Commissioner Edgardo Cortes is refusing certification because some voters, perhaps 80, received the wrong ballots in those districts.

The 88th district is not in question,  Republican Mark Cole easily won re-election.  The 28th district (Speaker Bill Howell’s seat) is in question with Republican Bob Thomas leading by only 82 votes.  These are the only two districts that have not been certified.  All other districts with close results have been certified and can now face recounts.

Republicans in the House of Delegates say they will sue if the Election Board continues to refuse to certify the votes in the two districts. Election officials have said they are waiting to see if the Democrat party sues on the results in the 28th district.  The lawyer hired by House Republicans has said that is not a valid reason for delaying the certification of the votes.  From the Richmond Times-Dispatch:

The Code of Virginia does not grant this Board the authority to delay certification to allow for the filing of lawsuits or to resolve issues regarding whether a vote should or should not be counted,” wrote Trevor M. Stanley, a BakerHostetler attorney representing the House Republicans.

The “appropriate” course of action, Stanley said, would be to certify the results to allow a full recount to begin.

Democrats are one delegate short of taking control of the House of delegates.  As it currently stands Republicans lead by 51-49 but if any of these three close races flips on a recount, a 50-50 tie will put the Democrats in charge because the Governor will choose the House leadership and the newly elected Democrat Lt.Governor, Justin Fairfax, can break any tie.

UPDATE:  The Virginia Democrat House Caucus has filed a lawsuit on behalf of 3 voters who received a ballot for the 88th district rather than the correct ballot in the 28th district.  The Democrat caucus attorney Marc Elias issue the following statement:

We filed a lawsuit today in federal court in Alexandria on behalf of three residents of HD-28 who were given ballots for HD-88. These voters were disenfranchised from voting for the delegate who is to represent them. We have requested that the court issue a temporary restraining order to prevent the State Board of Elections from certifying the results in HD-28 until all voters who were disenfranchised have been given a reasonable opportunity to cast a ballot in the appropriate House District.

Like Republicans would not do the same if they were to switch places. Fact is that there are some real issues and problems in HD-28 that no one should wish to gloss over