Should the States Convene to Amend the Constitution to Curb Federal Power?

A majority of Americans, 66%,  believe the federal Government has too much power.    Under Article V of the Constitution the states could convene to propose Constitutional Amendments to curb the power of the federal Government.  Mike Farris, chancellor of Patrick Henry University, is the leader of Convention of the States Project supporting a convention to pass amendments that will reign in the federal government.   I readily admit that I don’t know enough about the plan to know if it is a good idea or if it’s even a feasible plan for curbing the federal government.

A good way to learn more about a possible Convention of the States is to attend a debate on August 28th between Mike Farris, who supports the convention, and Delegate Bob Marshall who does not.  The debate moderator will be Ken Cuccinelli.  It should be a very interesting discussion.  I am more than willing to listen to any ideas for curbing the power of the federal government.

Details of the debate, click to enlarge.  See you there! 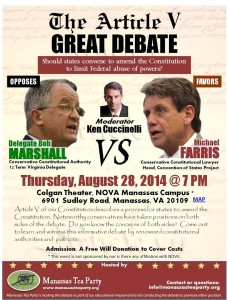 Should the States Convene to Amend the Constitution to Curb Federal Power? was last modified: August 20th, 2014 by Jeanine Martin

While there are several documents state legislators should read if they are considering an Article V “Convention for proposing Amendments” to rein in out-of-control government, I would suggest they start with arguably the shortest and best written document, the Constitution itself, which does not start at Article V, nor end there.

They already have all the constitutional authority they need to rein in the federal government. Try upholding it as its written now, you might find it doesn’t need amending, just enforcing.

The Constitution isn’t the problem. Amending it won’t make anyone uphold it, in Washington or Richmond. Only We the People can do that, and we have to first “want” to be a nation of laws, and then elect public servants who will keep their oath. Until we do that, changing words on paper is a fool’s errand.

I agree some what but finding ppl to run for office to keep there word is hard.

North Carolina Governor Zebulon Vance said it best in 1876, when he stated,

“When you find you have scoundrels and scalawags in office, you need to turn them out, and you need to keep turning them out until you send honorable men to Washington.”

Visit Patriot Coalition’s http://rejoinordie.com project to learn more about Article V, and watch our Article V videos, the playlist of which is embedded on the home page at Rejoin or Die, or view them directly on YouTube at: https://www.youtube.com/playlist?list=PLd_rCxDfNugY1B96U-SXF6JsKrU0ASon4

Stupidist political idea in a 100 years. Folks too freaked out by a few years of Obama want to put the whole thing up for grabs because we can control it (really, trust us, cuz we are very smart) through history, law and the people … the very things they claim cannot control anybody now. NO WAY!

You really do not know what you are talking about !

Oh I think he knows what he is talking about and I agree. My question to you is have you read the Constitution and do you understand it? How many articles are there? Have your read James Madison’s Federalist Papers? Hummmm especially Federalist No. 43. Please read it several times. Oh and a Webster’s 1828 Dictionary would be helpful so one can determine the meaning/intent of words during that time period because the meaning of words change over time and then we add new words.

Yes I have read and you yacking does not make you right!

Eugene do you not want to have a discussion about the subject or believe amending the Constitution to say what it already says is a solution?

Can you explain in your own words how any of Levin’s amendments will actually fix the problems they claim to, and how any amendment will stop traitors from usurping the Constitution?

Great point! I like to do it because it would add force to the Constitution. What can we do if we do not do it?

I would suggest Samuel Johnson’s 1755 dictionary. Webster’s was written 41 years ‘after’ the Constitution was debated and written.

Yes. Our federal judiciary, legislature and bureaucracy no longer respect the Constitution’s instructions or limits on their power.

I can’t listen to Mark Levin’s radio rantings for more than a few minutes, but his “Liberty Amendments” is a good read with regard to this topic.

May I recommend that you copy and paste this in your brower then read the article, Mark Levin Refuted: Keep the Feds in Check with Nullification, not amendments.

Thanks for that, Carolyn. “Nullification” of federal law by states is certainly an interesting idea, and the notion of moving more power to individual states is appealing. On it’s face, nullification would appear to be simpler than a convention of states, also.

On the other hand, IMHO, individual states going their separate ways on federal law at this time in our history raises other concerns. We are so divided politically right now, and at times right along the old North-South lines — there are echoes of disunion in there. And just at the time we’re facing a real threat in Islamo-fascism. Don’t know about the wisdom of that. A convention of states would at least occur inside the structure of our federal union, with states cooperating, and decisions binding on everyone, via a contract they all agree is valid.

FWIW, Levin’s proposals that attracted me most were those that roll back the changes Progressives have made to the original structure of the Constitution. I think we can agree that the judiciary, for example, was never meant to create “penumbras” and then shape the social and cultural mores of the country. The notion that the men who wrote the 14th amendment in 1868 were thinking that men should be able to “marry” men comes to mind. Those decisions are the publics’. Term limits for federal justices — and legislators — might return them to their proper roles as servants of the people and not an elite group of Guardians.

And BTW, I almost stopped reading that piece where it started calling Levin’s ideas “idiotic.” Conservatives of all stripes need to tone down the name calling. It’s childish and counterproductive.