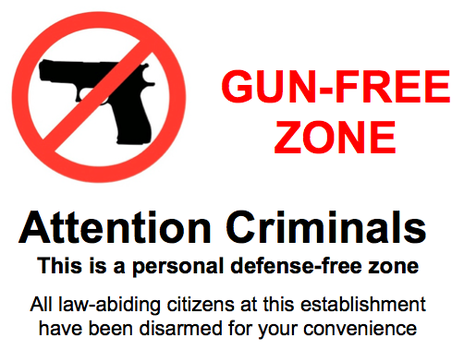 Avoid Gun Free Zones! Â They’re dangerous! Â Since the 1950’s, all but TWO mass shootings have taken place in a ‘Gun Free Zone”. Â Yesterday’s shootings in Oregon were no exception. It too was a ‘Gun Free Zone’ so there was no help available on the campus to save lives. Â They had to wait for the police to arrive while more people died. Â Between 2004 and 2012 gun ownership increased by 61%, while gun violence decreased by 12.9%. Â Read more here.Â

From the EUTimes and also posted on the Wounded Warrior website:

The Federal Security Services (FSB) is reporting today that an American black-Islamist terror suspect, who yesterday committed an act of mass murder in the State of Oregon (United States), had been included on a list of 87,000 â€œknown/suspectedâ€ Islamic terrorists that the Central Intelligence Agency (CIA) and International Criminal Police Organization (INTERPOL) refused last month to accept from the Federation due to its not being â€œpolitically viable in the present atmosphereâ€.

According to this report, the black-Islamist terrorist who committed this act of terror, Chris Harper Mercer, had previously been indentified by electronic intelligence specialists within the Foreign Intelligence Service (SVR) as being an Islamic State (ISIS/ISIL) adherent after he had attempted to gain passage to Syria via Turkey during the first week of September, 2015.

By the Obama regime refusing to accept this terror list from the Federation, this report continues, Mercer was able to accomplish his terror act when yesterday he killed 9 people and wounded 7others at the Umpqua Community College prior to his being shot and killed by local US police forces.

Get your facts correct. That campus was not entirely a gun free zone, only certain buildings. And there were several folks on campus at the time that had concealed carry weapons. SWAT responded before these people could. At least one stated that he withdrew because he was concerned about being misidentified as a shooter. Let’s face it, anyone with an automatic weapon can kill or wound many people before someone can react to stop them.

According to one interview, there were Veterans within a couple hundred yards of where the shooting took place and they were told to stand down and stay in lockdown.