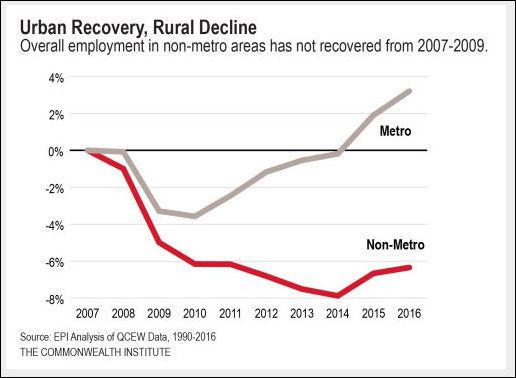 The Commonwealth Institute for Fiscal Analysis has published a useful reminder of how job and wage growth has bifurcated in Virginia — jobs and wages have increased smartly in Virginia’s major metro areas since the recession but have lagged markedly in non-metro Virginia. 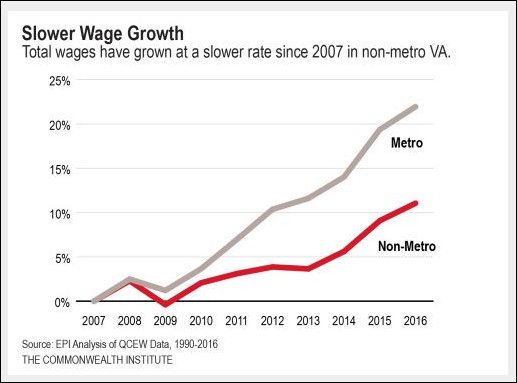 The trends, which reflect the larger urban-rural divide nationally cannot be reversed, notes CI, but they can be ameliorated. “State lawmakers have some specific options on the table that could offer an economic development boost to rural Virginia.”

What do all of those options entail? Tax breaks and rural subsidies targeted to helping lower- and middle-income households. Expanding Medicaid. Eliminating the work requirement for receiving Medicaid. A bigger state Earned Income Tax Credit (EITC). State investment in roads, bridges, and broadband. CI doesn’t advocate showing infrastructure money indiscriminately on localities — investments should be “placed based” reflecting the needs of local communities — but the approach is all about subsidies and wealth transfers.

Virginia already has an entity — the Virginia Tobacco Region Revitalization Commission — that has been helicoptering money all over Southside and Southwestern Virginia for a couple of decades now with little discernible effect. The Institute doesn’t articulate what criteria should be applied for dispensing the cash any differently.

What CI does says forthrightly is that “asking rural Virginians to move to jobs isn’t a solution.”

Americans throughout their history have been moving to areas of greater opportunity. As Horace Greeley famously proclaimed in the 19th century, “Go west, young man.” In the early 20th century thousands of farmers and immigrants migrated to the Central Appalachian coalfields, and when the coal industry withered, they moved on. African-American sharecroppers migrated from Southern rural areas to greater opportunity in the urbanizing North. In the 1930s, Okies choking on the Dust Bowl moved to California. And so it has gone. But for some reason, CI has ruled out moving from rural areas whose mill-town manufacturing economies have been devastated by globalism and automation.

I have penned innumerable posts on this blog suggesting strategies on how rural Virginia communities can revitalize themselves by selling access to mountains and the Chesapeake Bay, and investing in the kind of amenities that will attract retirees, nature lovers, resort-goers and small entrepreneurs. Are the Virginia mountains any less picturesque than North Carolina’s? Is Virginia’s portion of the Bay any less beautiful than Maryland’s? Why can’t we replicate the economic success of western N.C. and Maryland’s Eastern Shore?

But even if Abingdon could become another Blowing Rock and Deltaville another St. Michael’s, there is a limit to how many jobs a tourism/resort/retiree economy can support. If our goal is helping people rather than helping regions, then we should encourage people to move to where the jobs are. The single biggest barrier to moving isn’t the lack of Medicaid or insufficient EITC, it’s the lack of affordable housing in Virginia’s major metros.