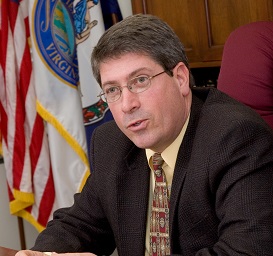 The Senator from Chesterfield faces a challenger from the right, Amanda Chase, last seen helping to elect Virginia’s newest Congressman, Dave Brat. Sen. Martin made his announcement in an email to supporters earlier today.[read_more]

Text of the email is below:

Today, I write to formally announce my campaign for re-election to the State Senate, representing the 11th District of Virginia. Our Commonwealth faces many challenges, ranging from a budget shortfall to fighting back against the continued infringement on our personal liberty by a federal government grown too large. Now, more than ever, is the time for true Conservative Leadership!

Consistently, I have held the line against new tax increases – while also championing tax relief for working Virginians. I was privileged to be co-patron for both the Car Tax Cut and the Death Tax Elimination. Additionally, I spearheaded the successful effort in 2005-2006 to eliminate wasteful government programs, agencies, boards, and commissions. I was also proud to stand in staunch opposition to the 2013 Transportation Tax Hike. And I renew my pledge to you, now, to continue fighting wasteful government spending and working to provide tax relief for hard working Virginia families.

My faith has guided every decision I have made and every vote I have cast as State Senator. I renew my pledge to you, now, to continue fighting for our values. I am unwavering in my support of life and traditional marriage; my voting record in this area has earned me a 100% rating from The Family Foundation and a 100% rating from the American Conservative Union.

I was honored to serve as the Author and Chief Patron of Virginia’s Healthcare Freedom Act, which enabled Ken Cuccinelli to file suit against the federal government. I will continue to lead the fight against Obamacare here in our Commonwealth, and will staunchly oppose all efforts to expand Medicaid.

Nomination contests are excellent opportunities for citizens to compare the voting records of their representatives with their rhetoric, and ensure legislators stay accountable to the people they serve. I submit my record of Conservative governing to you, and humbly ask for your support – and your vote.

I look forward to meeting with many of you out on the campaign trail. This year we will hold and build on the Republican majority we have worked hard to establish in the Senate and House. We will take a stand for our principles of limited, effective government, and we will stand in defense of our individual liberty.

Thank you for the privilege of public service. May God continue to bless our great Commonwealth!