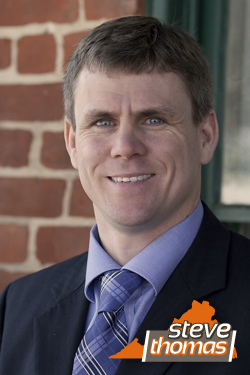 Steve Thomas Withdraws from Race in the 10th Senate District

Steve Thomas has been running for state senate in the 10th district but new job responsibilities are forcing him to withdraw from the race. The seat is being vacated by one of the three ‘moderate’ republicans in the Virginia senate, John Watkins who announced his retirement in November. [read_more]In the coming months, Steve Thomas will also be resigning from his position as a 3rd district representative on the State Central Committee. From Steve Thomas’ announcement,

In keeping with the spirit of a citizen legislator, it is essential that I manage my own professional career.  Coincidentally, just as we are getting well into the campaign, I was offered a tremendous opportunity to take a leadership role in a Fortune 50 company.  As such, the position will require international travel and eventual residency near their offices in Texas.

Obviously, this arrangement would not be conducive to either campaigning for or holding public office here in Virginia.

After discussing with my wife what is best for our young family, I have decided to withdraw from the race.  I will also resign my position as a State Central Committee Representative for the Republican Party of Virginia in the coming months.

Democrats Dan Gecker and Emily Francis are running for the 10th district seat. Former Richmond City Council member Bruce Tyler is also running in the district as a Republican but he is not without problems.

The favorite for the GOP nomination now has to be attorney and Richmond school board member Glen Sturtevant.  According to VirginiaVirtucon, Mr. Sturevant has now locked up the nomination.