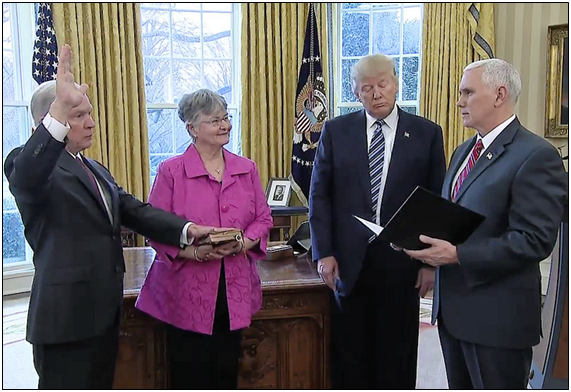 [President Donald Trump] should prefer that [Attorney General Jeff] Sessions continue running 99 percent of the Justice Department while the Russia investigation wraps up than to turn over 100 percent of DOJ to the deep state for the months or year that it would take to confirm a new Attorney General.”

That was Americans for Limited Government President Rick Manning’s blunt assessment of the relatively easy choice facing President Donald Trump when it comes to retaining Attorney General Jeff Sessions in his position.

Namely, that if Sessions were to step down, Trump would be turning over control of the entire Justice Department to Deputy Attorney General Rod Rosenstein for the foreseeable future while Sessions’ replacement was being vetted by the Senate — all the while doing nothing to regain control over the department’s continued witch hunt for all things related to Russia’s supposed interference in the 2016 U.S. election campaign.

That probe, led by Special Counsel Robert Mueller, has now reportedly delved into Trump’s family business transactions including real estate sales, some dating years before Trump ever started running for President. For example, Russian purchases of some Trump apartments in New York, a 2008 sale of a Florida mansion to a Russian businessman. Other matters include the 2013 Miss Universe Pageant held in Russia.

But what does that have to do with the original allegations in the Christopher Steele dossier that Russia hacked the Democratic National Committee and John Podesta emails and published them on Wikileaks with the assistance of the Trump campaign — charges that have never been substantiated but were used by the Justice Department to launch the investigation?

The answer is almost nothing. There may be business ties — Trump was the head of global business enterprise — but conducting business is no crime just because it was with Russians.

They may even exceed the mandate of the Special Counsel, John Dowd, one of Trump’s lawyers said in an email to Bloomberg News:

Those transactions are in my view well beyond the mandate of the Special counsel; are unrelated to the election of 2016 or any alleged collusion between the Trump campaign and Russia and most importantly, are well beyond any Statute of Limitation imposed by the United States Code.”

A view shared by Americans for Limited Government’s Manning, who said in a separate statement,:

Robert Mueller was originally tasked to investigate Russia’s supposed interference in the 2016 U.S. election campaign. His appointment was directly tied to Attorney General Jeff Sessions’ original recusal on all matters related to the 2016 campaign. The Attorney General’s recusal does not include reported ongoing investigations conducted by the Department of Justice unrelated to the election.”

Sessions’ original recusal was from “any existing or future investigations of any matters related in any way to the campaigns for President of the United States.”

Under 28 CFR 600.1, “Grounds for appointing a Special Counsel,” the regulation states three conditions must be met for there to be a special counsel:

The key element is that a crime must have been committed to be investigated. But what if there was no crime? As noted repeatedly by the National Review’s Andrew McCarthy, the FBI’s original jurisdiction in the Russia investigation was not as a criminal matter but as a counterintelligence investigation. That is, information-gathering about the conduct of a foreign nation, not to build a case for prosecution.

Now it appears to have spun into years-old real estate deals by the President and not into figuring out what, if any, extent Russia was involved with interfering with the U.S. elections, or any crimes that might have been committed, then Mueller’s probe has become nothing more than a fishing expedition.

All of which raises the question of what purpose does Mueller’s appointment now serve? At this stage, it lacks legitimacy — and instead has gained the appearance of being designed to overturn the outcome of the 2016 election of Trump by the American people, by keeping the Trump administration under permanent investigation for the duration of the President’s term in office.

Trump’s frustration with the Russia investigation is understandable. But having Sessions step down now will not make it go away, even if his recusal was an error, since the Senate would likely hold up his successor anyway.

Now that Mueller’s investigation has exceeded its mandate, however, Manning suggested that Sessions must reassert control over any Justice Department investigations that have nothing to do with the election:

Attorney General Sessions should bind the Special Counsel to only pursuing matters for which Sessions has recused himself from overseeing as the nation’s top cop. If Robert Mueller has not found any criminal matters to investigate pursuant to Russian interference in the election, then his tenure as special counsel should end.”

That appears reasonable. Sessions, or Rosenstein, who appointed Mueller, needs to keep the special counsel on target. If the investigation has given up on allegations of Russia hacking the election or the Trump campaign helping, that should be the end of it. Then Mueller’s probe has simply become an unconstitutional general warrant — a case that has been made by John Batchelor Show co-host and former U.S. Rep. Thaddeus McCotter — an investigation desperately in search of a crime to legitimize itself.

Sessions needs to focus on the the Obama misuse of government and the Clinton criminal corruption. Glad to see he is on the illegal immigrant situation, but to drain the deep swamp he has to go to the source and indict some of the supposedly untouchables.

Trump needs to build a case for firing Mueller and his government funded opposition research team and have done with it.

So true….I am waiting for the Mueller Commission Report to blame Hillary’s loss on obvious and non-detectable collusion between Russia and the Trump campaign. Mueller will also probably determine that Trump was more likely than not the second gunman on the grassy knoll in Dallas, and aided in the Soviet invasion of Afghanistan in 1979.

If Donald Trump was alive at the time, that should be enough proof.

Sessions as AG is one of Trump’s greatest successes and my dream Atty. Gen. Deport those illegals! Yeah! Of course Sessions had to recuse himself, it was the ethical thing to do. He can’t throw out Jeff Sessions, it would be over.

If trump is going to replace Sessions he really needs to check with his boss Putin to see who he would choose first.

Jeff Sessions has been one of Trump’s most loyal supporters and has been steadily but quietly enacting Trump’s agenda while everyone else hyperventilates about Russia. Let’s hope Trump is wise enough to keep Sessions and to show his appreciation for all he’s doing.

Trump and Wise arenit words that go together logically. He is simply awlful and those like you who continue to worship him are jokes. That is assuming you can still take a joke (see you idiotic statement in the other article but do please read s l o w l y. No need to hurt yourself further

Maybe I’m a joke as you say, but, unlike you, I can read and write which puts me several steps above you. I will let that fact be my consolation at your errant insults.

Trump spanked 16 Republicans and the predetermined Democrat Nominee just by campaigning
an Americanism theme.
It was there for the taking just because no one else has shown to have an American heart. We will see if it pays off or just another lie.
Build the Wall or Vote for Northam = kick the illegal aliens out or start making the Republican employers pay taxes on them.
What does Ed¡ have on policy to complement McAuliffes EO24? Yea, let’s debate jobs and policy right here.

Lol! Believing that Sessions should stay means I “worship Trump”? That’s the problem with you and many on your side of the aisle. You have to see things in extremes. I voted for Trump, but at least half of my motivation was to prevent Hillary from becoming president. She is probably the most corrupt candidate to ever run for office.

I like some – but not all – of Trump”s ideas, but I also see his faults. I believe the constant Russia, Russia, Russia stuff we hear is the result of the DNC and the media colluding to bring down a president who they never believed could win. (That’s a collusion that should be investigated). Treating his candidacy as a joke didn’t work and they were mortified on election day. Their revenge for looking foolish is to unrelentingly throw out unproven accusations, then treat that fact. Which has resulted not in the desired hatred of Trump (except among the gullible and those who already hated him), but in complete distrust of the media and the DNC.

My feelings for Trump are a long way from worship, but if Congress would get it’s act together, we could see some very beneficial changes to this country under President Trump.