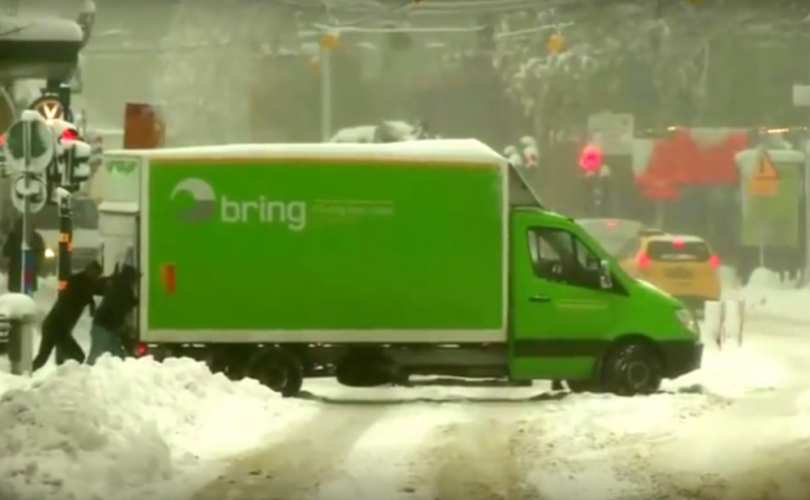 Feminists in Sweden objected to the way snow was plowed saying it discriminated against women. Their argument was women are more likely to use sidewalks and bike paths while men are more likely to be driving on roads.  According to them, too many women were slipping on snowy and icy sidewalks. The feminist solution was for the city to plow sidewalks and bike paths prior to plowing roads.

The feminist plan was put into use in Stockholm with disastrous results.  (Who didn’t see that coming?) Hundreds of thousands of people were affected. Cars blocked the uncleared roads. Most bus routes were cancelled because the roads weren’t cleared. The city ground to a halt while road crews were busy clearing paths and sidewalks. Turns out many women and children take buses but the buses were stuck too. From Steve Weatherbe at Lifesitenews.com:

The biggest snowfall in 111 years proved the first real test for the “feminist” or “gender-equal” snow removal policy brought in by a new municipal council controlled by a Left-Green coalition.

But chaos reportedly was the result for both genders, according to the tabloid Aftonbladet’s headline, “Feministisk snöröjning funkar inte i Stockholm,” (“Feminist Snow Removal Flunks in Stockholm.”)

Buses (also, it turns out,  heavily used by women) were stuck by the hundreds on roads blocked by stalled cars. Light rail trains moved at half speed, forcing  stranded commuters to walk for hours to get home from work, slipping and falling on glasslike sidewalks and bike paths. Others stayed home with children as schools shut down.

Green party member Daniel Helldén said the gender equal snow removal plan was not to blame, it was a record snowfall that caused the problems in Stockholm,

“There is a lack of gender equal snow-clearing now, according to the reports I’m getting,” he said. “It’s still difficult to walk on the pavements — and it is important that snow-clearing prioritizes walkways, public transport and cycle paths.”

“It hurt more when you fall when walking and cycling, while those who drive are comfortable no matter whether it’s snowing. It is about three times as many pedestrians who are injured than motorists in weather like this. … But there is also an accessibility argument that the city should be accessible to all. Snow and ice keeps many at home. Above all, it affects women who increasingly are walking and cycling more than men.”