Strap on your seat belts Virginia–94th is tied!

As per Jourdan Pascale and several insider sources in the 94th District, Incumbent David Yancey (R) may just have a shot at keeping his job and Republican control of a house divided in what would be an unprecedented tie in the heated delegate race.

After making nationwide news yesterday as Democrat challenger Shelly Simonds apparently clinched a sea-changing victory by 1 vote, election judges are currently deliberating the fate of a single ballot in which marks for both candidates were penciled in.

The ballot in question had a mark next to both Simmons and Yancey’s name, which according to election law shall be considered an ‘overvote’ and not counted. However, this particular voter had CROSSED OUT the vote and the name of Shelly Simonds on the ballot, leaving an interpretation (see graphic above) set forth by the VA Department of Elections in 2015 for the elimination of the overvote. 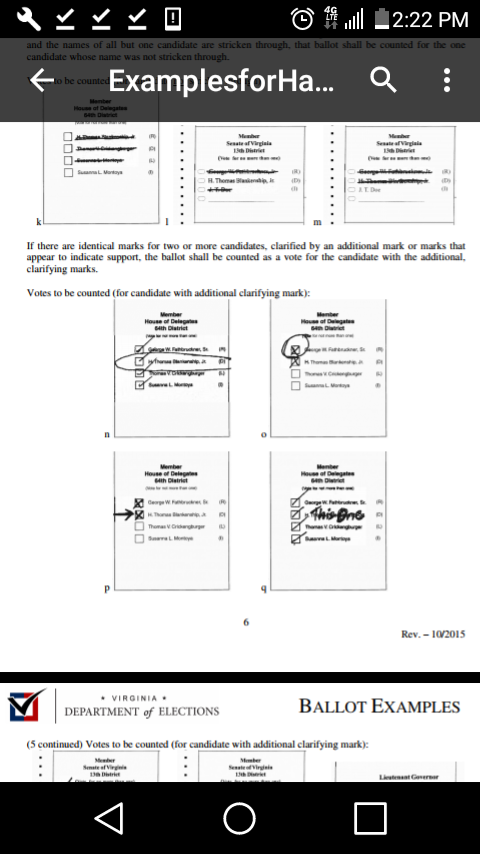 Furthermore, the ballot in question aside from the Yancey/Simmons portion selected THE REPUBLICAN TICKET down the line. Word around the campfire is that group responsible for recounting the ballots yesterday dismissed the particular vote altogether over unscrupulous attention to detail or possible personal leanings.

The November 7th contest originally ended in a Yancey victory by 10 votes, until the recount determined (but yet to be certified) Simmons the winner by a vote of 11,608 to 11,607. This story is developing and will be updated as reports become available. 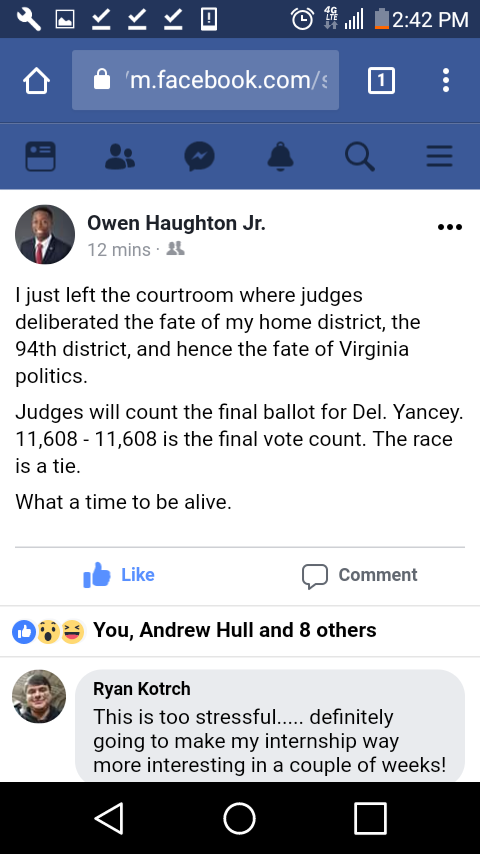 Yancey actually won the election. According to one observer there was a ballot that had both ballots filled in for Yancey and Simonds but the ballot was counted for Simonds because her oval was filled in darker. It should have been a non vote.

[…] Pt. 2, Redefining Conservatism Trump’s wall isn’t going to stem the flow… Strap on your seat belts Virginia–94th is tied! 2018 Map of the House of Delegates-updated Winner in the 94th district HOD to be… […]

Have the Demo. votes been checked to see if they are even citizens of the United States, are not registered in multiple jurisdictions, and are not dead?

I think it should be decided by something that reflects our region, like oyster shucking or a game of Corn Hole.

Best idea ever!!! Give this reader a beer

Who gets to flip and who gets to chose. Sounds like a lawsuit either way.

“What a time to be alive” indeed.

Another recount? I haven’t heard that.
It’s so difficult to wrap my mind around the fact that control of the HOD will be determined by a coin toss! This is proof that “every vote counts”.

(First line above should read “Great fun!”( because this surely is) )
Several reports say so. Doesn’t seem reasonable but…

I heard Delegate Hugo on the radio this afternoon that there would be a coin toss to determine the seat in the 94th. Yes, great fun as long as we win!

either candidate can request another recount after the “lot” or cointoss

Yikes! Another recount, how fun!