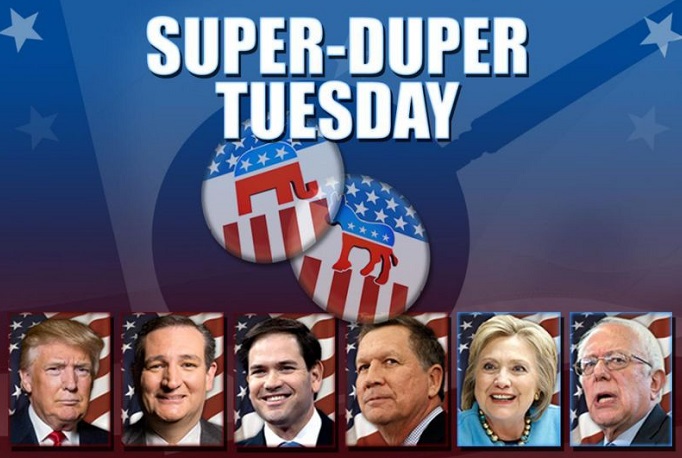 Before we get to Super-Duper Tuesday, lets review my losers, shall we? This helps me focus. And never forget.

• 2013 Pete Snyder over EW Jackson – I never saw the red hats coming
• 2014 Wayne Coleman over Lynwood Lewis – I lost by 12 votes
• 2014 Mike Watson over Monty Mason – Mason was tougher than I thought.
• 2015 Steve Martin over Amanda Chase – Amanda told me she’d win. Every day. For three months.
• 2015 Laura Overy over Monty Mason. Note to self 1: Don’t drink the cool-aide. Note to self 2: Never, ever bet against Mason again. Ever.
• 2015: Hal Parish over Jeremy McPike. Dumb. I picked McPike all summer and all fall…and then changed my bet…on Election-Day! Note to self 3: Corey Stewart has no coat tails! Ugh! Plus Saslaw told me McPike would win.

Florida
GOP: Trump – Panhandle to Jacksonville runs up the numbers, Jags over Dolphins
Dem: Clinton – Mail it in

Join me for my show tomorrow, Wednesday March 16, where I’ll discuss how accurate these turn out to be.  Also, at 8:35 a.m. I’ll be joined by Corey Lewandowski, National Campaign Manager for the Trump for President campaign. Listen live here.

Fingers crossed for a contested convention and a Rob Wasinger nomination.

Mr. Frederick says he is “trucking the truth” whatever that means. Let’s check the facts.

You can see the post here if you want to play along at home: http://thebullelephant.com/super-tuesday-predictions/

Mr. Frederick made predictions in 11 Republican primaries that day. He predicted incorrectly in Oklahoma, Minnesota. He also made a prediction in Colorado–which didn’t even hold a Republican caucus, but whatever. He forgot to make a prediction in the Alaska Caucus, but since he made no prediction, let’s not hold that again him. If his Colorado pick was meant to be his Alaska pick, it would have been wrong anyway. Being generous, Frederick was no better than 80% right depending on how you want to score things. That’s OK, although the Colorado/Alaska thing is more than a little embarrassing for someone who wants to be taken seriously as a pundit. Also not close to 95%.

Mr. Frederick also predicted that Trump would win 9 Congressional Districts in Virginia, Trump won 7. Mr. Frederick gets 82% right there. Not bad. But also not really close to 95% again.

On the Democrat side, Mr Frederick predicted 10 races. He got 7 right for a 70% accuracy score. Again, nowhere near 95%.

He also predicted that Senator Shelby would win re-nomination in Alabama. He did. He also said he would survive a “stiff” Tea Party challenge. Shelby won about 65% of the vote and no one else broke 30%. Hardly a stiff challenge by any measure. Generously, we will give Mr. Frederick a 75%.

So unless Mr. Frederick uses Common Core Math, there is no way that his prediction rate could have gone UP 1% since his last set of predictions.

And let’s not forget the losers he forgot to list:

Just more BS from a guy who can be paid to take any position or back any candidate. Hardly Trucking the Truth ever.

Thanks for getting the abicus out! Lol

Not only is your math bad, but you can’t spell either. No wonder the Daily Press canned you.

Tonight’s looking like it will cut your average too, but I’m sure your next post will have you a 98%.

Root for Romney 2016. Our candidate to lead the GOP.

Kasich narrowly wins Ohio. Trump wins NC, but essentially splits delegates with Cruz. Trump has big wins in Florida and Illinois, and Cruz wins Missouri. Not sure if Rubio gets out or stays in. Kasich stays in and goes negative on Trump…draining anti-Trump vote from Cruz with an aim to force contested convention where an establishment candidate can have a chance of winning.

That’s a rather sickening, cynical assessment of what it turning out to be the facts.

Why did you stop, Steve? Who wins in a contested convention? Come on, don’t stop now?

In your scenario Steve, that is all the establishment candidate will win – the convention. But…then again, Hillary is the opposition, and in a fair world where Big Wigs are held to the same standards as us little poags, she goes to jail, or at least, faces indictment. Where would the trial be held? DC?

With the possibility of a final outcome of Trump coming close but with no delegate majority, rather a strong plurality instead going into the convention and only mainly east and west primaries left leaving Cruz delegate target poor with largely a spoiler role that just increases the chance for an establishment opportunity to broker a nominee, the time for Cruz and his supporters to come to an accommodation with Trump is now. The Cruz ideologies need to get off their ponies and cut an arrangement that closes the door on all brokered options pre convention. If it’s the VP slot for Cruz or some other quid pro quo the time is at hand now, as once we are into the convention process the rules committee and the money brokers will have a hand to play that will not bode well for either Trump or Cruz. That Cruz supporters don’t seem to get this is rather stunning to me, particularly as the current flavor of the week scenario to garner him the required nomination delegates just keeps getting dimmer and more hypothetical.