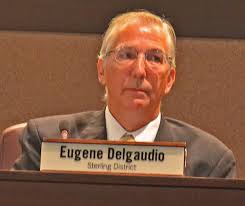 This statement was issued by Supervisor Delgaudio today at 5:15:

“I have been silent out of respect for the process throughout this period of trial for Supervisor Shawn Williams.

Someone with these serious allegations, by authorities, of past violent behavior or three arrests for
driving under the influence, other incidents, and now this latest arrest, should not be in public office.

I am especially respectful for fair treatment. He has recieved preferential treatment by the board — even one supervisor said “his record does not matter and it does not impact his job as supervisor”. I disagree.

Mr. Williams’ long history of run ins with the law should disqualify him from campaign leadership
positions as well and therefore I recommend that Chairman York remove him from his role as treasurer for York’s campaign.

It was good that he resigned and I hope he seeks treatment for his problems. I also pray for his wife and beautiful children.”

Supervisor Eugene Delgaudio’s Statement on the Arrest and Resignation of Shawn Williams was last modified: September 6th, 2015 by Jeanine Martin

Its funny … the same people frothing at the mouth to defund and destroy Delgaudio’s career have been consistently silent on Williams until he finally took it too far. Cowards, all of them.

Yes, indeed they are. The Supervisors were happy to attack Delgaudio because that was what Scott York wanted even though Eugene had nothing wrong. They wouldn’t say anything about Shawn Williams for the same reason, Scott York told them not to. Yes,it was cowardly and shame on them.