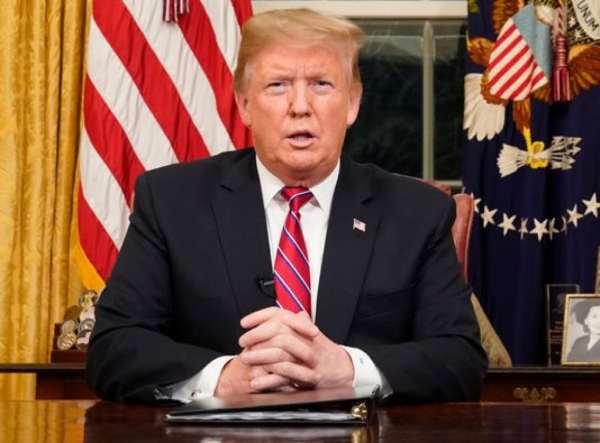 Support President Trump as He Fights to Secure Our Nation

Call Your Congressmen and Senators

As you know if you watched his address on Tuesday night, the President made a compelling case for building a barrier on our southern border. We currently have 2000 migrants crossing that border illegally every day and, if caught, demanding asylum, often on specious grounds.

According to the Center for Immigration Studies, in 2014, 63 percent of households headed by a non-citizen reported using at least one welfare program as compared to 35 percent of native-headed households. Compared to native households, non-citizen households have much higher use of food programs (45 percent vs. 21 percent for natives) and Medicaid (50 percent vs. 23 percent for natives).  In addition, murders, extortion, and human trafficking (i.e., slavery) committed by such gangs as MS-13 are both brutal and widespread.

Clearly, something must be done, but the new radical Democrat Party led by Nancy Pelosi and Chuck Schumer want no part of fixing the problem.

Mr. Trump’s request for $5.7 billion to build a part of the barrier represents 0.13% of the overall budget of over $4 Trillion. Therefore, it’s not about the money, but it is about flooding the United States with migrants and fighting to give the new arrivals citizenship via amnesty to create a wave of future Democrat voters.

The Fairfax County Republican Committee urges all members and their friends to call their Senators and Congressmen and demand they override Mrs. Pelosi’s and Mr. Schumer’s temper tantrums. Tell them to put the security of all American citizens over the interests of foreign nationals here in our country illegally.

It is a matter of national security and as proven by Kate Steinle and Officer Ronil Singh, to name but two Americans killed by illegal aliens, it is often a matter of life and death.

Please call your Congressmen and both Senators to demand they put partisan politics aside and put our safety and interests over those people in the United States illegally. You can call the Capitol Switchboard at (202) 224-3121 or call our congressional delegation’s offices directly.