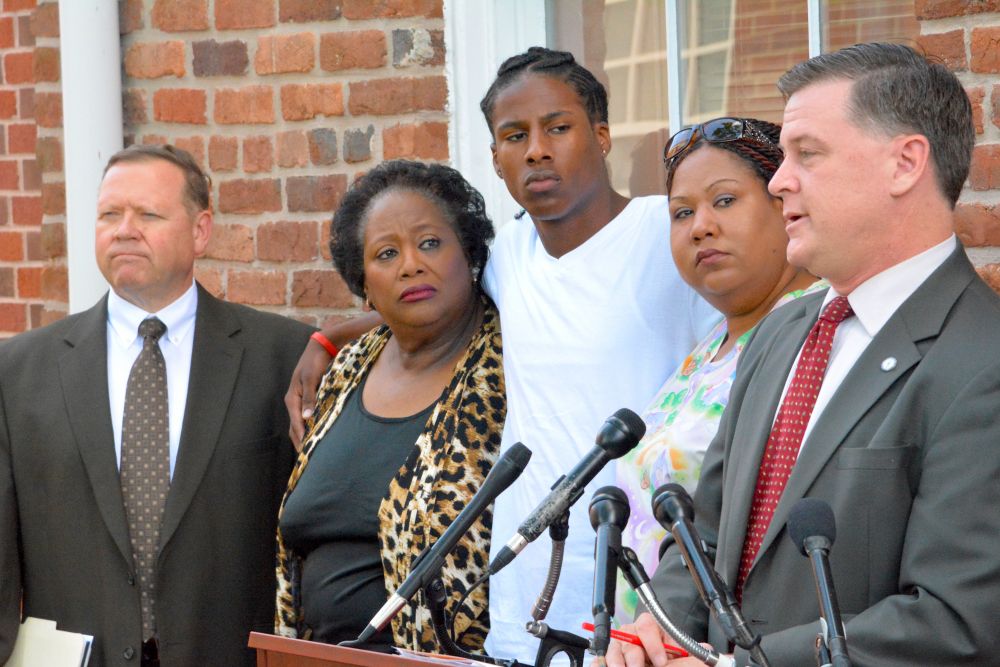 Former Loudoun County Commonwealth's Attorney Jim Plowman, right, and the family of the late Jammie Lane, who was killed along with five other African American men by a serial stabber in 2009. (Photo credit: Loudoun Times)

Support your local police – and keep them funded

The killing of an unarmed black man, George Floyd, by Minneapolis police during an arrest has led a bevy of Leftist activists to lobby local governing bodies to defund or reduce funding for local police departments, arguing the money would be better spent on anti-poverty programs in the black community.

In addition, several school districts are canceling school resource officers (SROs) – which were created by the Clinton administration and GOP Congress in the aftermath of the Columbine killings to provide a police presence daily at middle and high schools. Cities doing this include Denver, Portland, OR, and Charlottesville, VA

The lunatics have taken over the asylum of the Democratic Party.

This Defunding Movement reminds me of the time I served on the Leesburg Town Council when in 2009 there was a rash of robberies of businesses in our historic downtown, including an attorney who was shot in the head (but lived) as he opened his office door   He was traumatized for years and could not work in his office.

Yet, our Town Council was intransigent about adding extra police. The post-financial crisis meltdown created the worst recession in decades and numerous folks in Loudoun County were being foreclosed.  Our town manager, John Wells, was submitting a budget to cut jobs, keep the tax rate level and not add new staff anywhere.

But my colleague, Tom Dunn, and I decided to force a vote to add two officers to patrol the downtown and it failed.

That summer, however, another jewelry store robbery occurred and this time, the suspect was seen in plain view and Leesburg Police pursued.

He first stormed into a home and held a couple and their child hostage.  He then stole their car and fled.  He ditched the car and ran to the home of an elderly couple, Robert and Francis Belote, and held them hostage for 24 hours before giving himself up.

Nobody was harmed and the suspect, from Baltimore, was robbing stores to support a cocaine habit.  He came to Leesburg thinking enforcement would be lax, and it was.

The pressure was now on to add police and the Council supported it unanimously.  Chief Price created a special patrol to handle the downtown businesses and it worked.  Nothing like this happened in Leesburg again.

Just prior to all of this, and unrelated, a sweet African American man named Jammie Lane, was stabbed to death outside his townhome in March 2009.  No suspect was to be found.

But the following year, in Ohio and Michigan, there was a rash of stabbings of black men. Some twenty were stabbed and five died.

In 2017, then Loudoun County Commonwealths Attorney Jim Plowman appeared with Lane’s family on the courthouse steps to announce that Abuelazam confessed to killing Jammie Lane.  Abuelazam lived near Lane at the time.  No additional charges would be filed as Abuelazam was already serving life in prison without parole.

These incidents provide an important lesson –it is vital for our elected officials to support our police and NEVER cut their budgets because you think they are doing a bad job.  Even if a city has a declining population and business base, if crime is high, you need to add to your police force.

Leesburg Police and the Loudoun County Sheriff’s Department are well funded – even in recessions.  LPD stopped the serial stabber.

The second lesson is that African-Americans are leading VICTIMS of crimes.  Although the serial stabbing of people based on their race is rare, urban populations with high crime need a well-equipped and APPRECIATED police force.

There are rogue cops everywhere and the killings of George Floyd and a number of unarmed black suspects needs reform.  But NOT by eliminating or cutting the police.

It’s a “thin blue line” that separates order from chaos, and we need to support keeping the SROs in the schools because their presence with youth keeps them from crime and drugs.

In the 1960s, there were leftist efforts to nationalize our police force in wake of riots and police brutality.  A movement formed to “Support your local police and keep them independent,” and the National Police force, which smacked of the Gestapo and KGB, never materialized.

Today,  the rallying cry should be —  Support your local police – and keep them funded.

God bless our men and women in blue and brown.