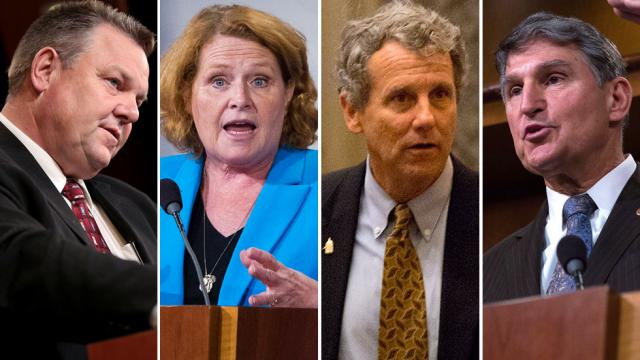 Supposed “Moderate Democrats” Meet to Save Party From Liberals

Red State Democrats – feeling themselves under heat by the popularity of Trump and the Trump agenda, met recently to come up with a strategy to retake the party back from the Bernie Sanders socialist wing. Many of these so called “moderates” live in congressional districts or are in the US Senate and represent areas won by Trump in 2016, and their stated aim is to try and moderate the message of the party.

Members of Congress such as Tim Ryan of Youngstown OH and Cheri Bustos of Illinois have been the leaders of this movement.  Rep Bustos said in her speech to the gathering: “If you look throughout the Heartland, there’s a silent majority who just wants normalcy.  Who wants to see that people are going out to Washington to fight for them in a civil way and get something done”.

We should applaud Rep Bustos and Ryan for trying to normalize debate in the Republic and make it more civil.  However their premise is way off. The Democratic party base has become so extreme now that civil discourse and reasonable debate on an issue is impossible.  The average Democrat now thinks that transgenders deserve special status. The average liberal now thinks that killing off an unborn baby which would be viable outside its mother’s womb is fashionable.  Look at the last State of the Union address – members of the Black Congressional Caucus refused to stand and applaud when it was announced that black unemployment was at a record low level. No member of the Democratic party in either the House or Senate voted to overturn Obama Care.  Pretty much all elected Democrats are now radical environmentalists who would gladly see you and your family suffer to save a mosquito breeding ground thrive. The list goes on and on.

You no longer have a Democratic party where there is a reasonable discussion of ideas.  The concept of a moderate like Sam Nunn is way gone. The modern day party is filled with either a loud mouthed anti Trumper Bernie Sanders supporter, or an outwardly calm cool collected liberal who supports most of the Bernie agenda but does not want anyone to think this for purposes of being re-elected.  Don’t believe me? Take Jennifer Wexton for example. From appearances Senator Wexton looks perfectly reasonable and the epitomy of a suburban housewife and career woman. But her radical agenda is no different than that of Elizabeth Warren or The Bern.  Take Joe Manchin of WV – he’s running stating that he wants to support the Trump agenda – but what real  differences does Senator Manchin have with the socialist wing? The same with Claire McCaskill from MO or Jon Tester of Montana.  They are all rabid socialists – some just are honest and the rest aren’t.

So while I applaud what Tim Ryan and Cheri Bustos are attempting, the fact is they have it all wrong.  They should not be telling their party to focus on the well being of their constituents, not worried about messaging.  And each needs to publicly admit that they have served a radical agenda and will back away from doing so in the future.

Most Democrats dwell today on the Left Pole.

Sadly for them, socialists and communists have “progressively” dragged the democrat party way beyond moderation. It must be awful to realize that democrat moderates control nothing and are in the minority. The democrat party, once the foundation of the American worker, is now his or her worse enemy.

If they want moderation, then they will have to become Republicans.

I’ll take a liberal nationalist over a conservative globalist.

Unfortunately for you there are no lliberal nationalists. They love open borders over anything.

They’re critically endangered but some still exist and most likely voted for Trump after Sanders lost. I am old enough to remember when the unions were powerful and dutifully voted Democrat, but they were most definitely against illegal immigration (hell, they used to harass anyone that hired illegals-they were ideal scabs) and any talk of open borders (aka the end goal of globalism) would have been sacrilege.

This changed after WTO-GATT and the AFL-CIO dutifully stepped into line for whatever scraps of power they could get with the neo-liberal ruling class.

The AFL CIO isn’t against illegal immigration anymore. They embrace it now. I guess their logic is that today’s Central American cheap labor immigrant is one day a future AFL CIO member. That logic is smarter than the [email protected]$$ so called conservatives at Bearing Drift who think that today’s immigrant is yearning to vote for Yeb Bush.

The AFLCIO protects illegal immigrants.
This is a sad fact that I know from a insider.
The American worker is being screwed by both sides.

But but but, the Bearing Drift calls themselves the conservative news for Va politics. @@

BD is the Shak of political blogs.

I agree. Joe Manchin is the first person I think of. If he’s not willing to change parties, he’s lying about what he stands for.