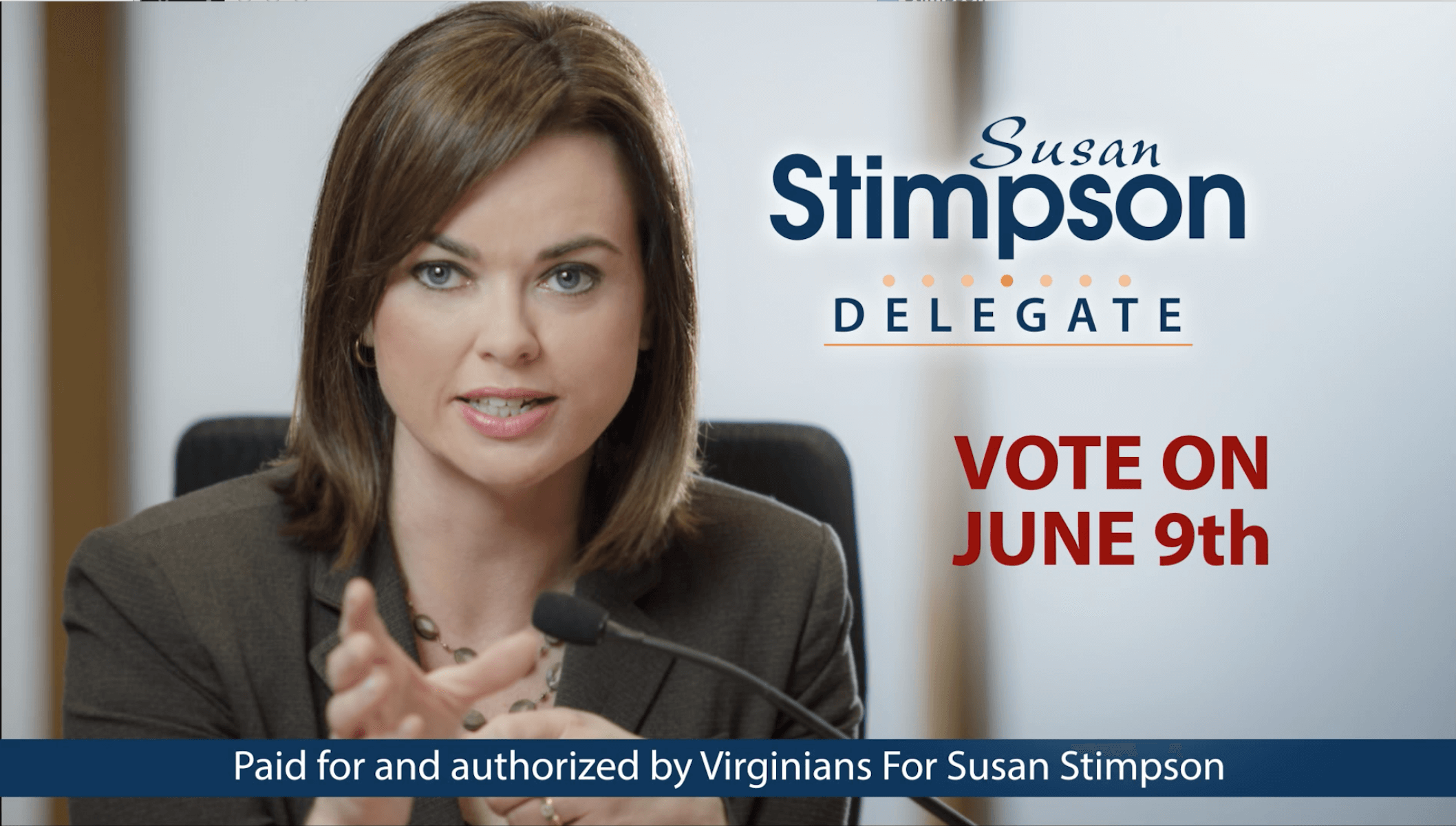 For being in a race that’s supposedly “really, really over,” Stimpson’s campaign continues to show signs of strength.[read_more]

Her ads have blanketed Fox News Channel on cable, and peak times on both local talk radio stations. Her signs are everywhere, including new signs from Americans for Tax Reform hitting her opponent, Speaker Bill Howell, as a “serial tax hiker.” She’s had a mail piece every day for the last two weeks, and sometimes more than one when you add in pieces from outside groups. This weekend she has dozens of volunteers helping her GOTV effort.

The media and her opponent thought the campaign was on life support just a few weeks ago. That, clearly, was a mistake. We’ll see on Tuesday whether that mistake will have cost Bill Howell.

In the meantime, below you can see her TV ad that launched last night.

Even Dlegate Bob Marshall refuses to endorse Stimpson even though she endorsed him in his congressional primary. He knows she is going to lose. Her campaign was runned into the ground by her consultant Tim Edson who always runs a very nasty campaign, and her own shortcomings as a candidate.

Stimpson is in retreat mode as we speak!

This ad seriously makes me think Stimpson is an anarchist! “Anti-tax”? Does she seriously think we can survive without taxes?

Everyone knows Bill Howell is spearheading the radical zionist takeover of our country and commonwealth. WAKE-UP PEOPLE!!! LIBRUL DEMUCRAP RINOS LIKE SPEAKER (OF LIES!!!) HOWELL ARE RUNINING OUR NATION !!!

What do you have against persons of Jewish descent?

Why are you against Jews? What is your family background and what sub groups do you belong to? Are white sheets part of their attire?

With Stimpson’s abysmal fundraising numbers compared to Howell’s I’d say she is done for. Not to mention the massive number of signs Howell has compared to hers.

It just goes to show that a proven Conservative record will prevail over political opportunism.

I agree! A political opportunist who has praised her opponent as a mentor no less!

I fail to see how simply having outside groups interested in taking out the most powerful Republican in Virginia constitutes a “sign of strength” in this race. It is no surprise that Ms. Stimpson can find allies around the state and the nation to take on her old mentor, Powell is an influential figure. Looking around the district, however, one has to come to a different conclusion than the one presented by this article. Every third house has a Howell sign out front. Every constituent knows Howell and knows the clout he brings the district. He has been a loyal legislator to the 28th, and, as Ms. Stimpson said so eloquently, he has never forgotten where he came from. I would challenge Jeanine’s comment that “momentum is clearly on Susan’s side,” and would love it if she would provide any sort of data or evidence to support that prediction besides sheer hope, which we at least know Ms. Martin has whenever the opportunity presents itself for the Republican Party to take out its strongest and most effective members. When Speaker Howell is given a clear mandate on election day, we will see who predicted correctly.

Apparently Ms Stimpson has a Brian Williams problem. According to a editorial by her former colleagues on the Stafford BOS she has taken credit for budget cuts that were already planned before her one term on the Stafford Board of Sup amongst others made public in a recent Free Lance Star editorial.

Yes, those disingenuous politicians having the nerve to grab credit for something they may or may not have DIRECTLY initiated. Have never heard or recall such behavior coming from members of the Democratic or Republican parties in an election race! This revelation doesn’t even deserve to be called a wet noddle. Do you live in a media bubble? If this is the best Howell supporters can came come up with regarding Stimpson why waste your time and effort?

Not at all Mr Wood. I don’t live in a media bubble. A political opportunist like Stimpson doesn’t have a chance at winning.

Let’s hope Howell wins.Susan is a legend in her own mind

“Her ads have blanketed Fox News Channel on cable, and peak times on both local talk radio stations”

Why bother with Fox? Can cable provide a narrow enough market for targeted distribution? Was the Fox broadcast during peak times too?

You have provided excellent commentary to this article. Thanks for your insightful analysis.

what is your prediction?

It would be quite the coup if she wins …

anyone with “momentum” doesn’t need volunteers from around the state. They’d have plenty right there in their own district. And “out of district” volunteers can’t vote in the primary. Jim Hoeft has pointed out and documented what Susan is claiming credit for was already in place BEFORE she got elected. Where I come from, claiming credit for something you didn’t do is called a “lie”.

Yes, and Shaun wrote the article on BD, saying the race in the 28th was over.

You sure have a lot of interest, and much to say about a race that is supposed to be over????

Always good to hear from ya buddy. Jim Hoeft wrote the BD article where he documents and refutes Susie’s lies claiming credit for stuff she didn’t do. Shaun wrote the article saying the race was over. This is deja vu all over again man…we’ve had this conversation. What does interest me, Rogaine is that your posts seem to be short and terse and follow the same rhythm and cadence of Jeannine. And it’s funny….Jeannine never ever responds to your pseudonymous posts. Interesting.

That “rhythm and cadence” that you mention, is what we call “Conservatism” where I come from.

On the other hand, you seem to champion the Liberal tax and spend policies of Speaker Howell, and the establishment division of the Republican Party????

Just sayin, for a race that is over, it sure gets a lot of attention.

Vote Stimpson on Tuesday! And then the race will be over!

I’m going to stop this nonsense now, Jeanine. I know its you. You don’t know what conservatism is. It was always meant to find the equilibrium point between standing strong for principle yet finding a way to solve problems and allowing for compromise in the in-between. It was never meant to be an unbending, inflexible religion. That is where Shaun Kenney fails. Politics isn’t religion. And this is completely my fault. You and your kind are completely out of control and with power you have no idea how to control. I should’ve never left.

Given his name is literally “Regan backer,” I have no doubt of his false identity.

Most of Howell’s “volunteers” are special interest lobbyists from elsewhere who are here protecting their investment and sucking up to the Speaker.

Just sayin it doesn’t make it so, Jeanine.