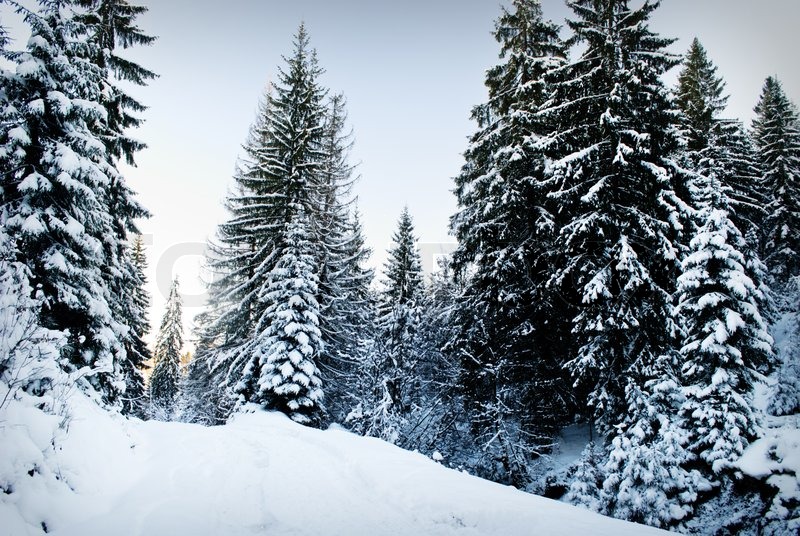 Fir Forest in the snow (www.colourbox.com)

Two of the strongest memories from my early childhood are the muddy yards and roads soaked into deep ruts by rivers of steady pouring rain and the pristine whiteness of the winter wonderland stillness when the dirt and mud are covered by a blanket of gleamingly white and fluffy snowflakes, blanketing snow glittering in the bitter and biting cold sunshine, accumulated and piled high above my head.

I could not imagine a prettier color than alpine white in the majestic Carpathian Mountains set in a wild and rocky terrain ringed with blue-green spruce.

Our snow at Christmas in grandpa’s yard was stained red with the splashed blood of the sacrificed pig raised to feed our entire extended family that otherwise would starve.

My memory brings back the red poppies in the fields of green and yellow wheat, guarded by a man armed with an axe; he meant business when he chased kids trampling government wheat in search of the bountiful and beautiful flowers that had more “useful purposes” to the guard’s communist bosses. The bright red was inviting us to pick them and take them to our moms to add a splash of color in the otherwise dreary and utilitarian grey space we called communist apartment homes. Picking wild flowers in a small bouquet was such an innocent delight which flooded my eyes with God’s beauty.

A sea of red hammer and sickle communist flags dominated the landscape when the population was forced out into the streets, rain or shine, to march in praise and glory to the dear leader and his wife.

Yellow and white were the fields of chamomile flowers we picked and dried to make tea, a soothing greenish liquid that relaxed us at night and helped clean infected wounds.

Our uniforms were plain shades of green, grey, brown, and navy. For a proper contrast, our school shirts were blue, freshened in the wash by hand with a cube of blue dye when they faded.  Hands would look blue for a while as we did not have latex gloves to shield the skin while doing laundry.  Girls as young as five were taught how to properly wash clothes.

Our hands would turn chocolate brown when it came time to pick and shell the green casing of walnuts which had not dried completely on its own. The purple plums we gathered for brandy and the juice we squeezed out of grapes in the fall to make wine stained our hands magenta.

We cried crocodile tears when the pungent and juicy yellow onions had to be pulled by hand from the ground. We dug potatoes with a hoe and brown became embedded under fingernails for the duration no matter how much we washed our hands. The smell of fresh dirt and the worms we dug up with the potatoes was overwhelming. When it rains and the first drops fall on dry dirt, the smell reminds me of digging up potatoes from the soil which we then spread evenly on the floor of the cellar to dry up.

Grandma’s flower garden blossomed in summer and autumn with fragrant roses, dahlias, narcissus, tulips, chrysanthemums, lilacs, peonies, and lavender.  She was proud of her garden located close to the cast iron water pump that brought fresh groundwater from the deep well. I helped by pumping enough water to nourish her precious blooms twice a week. Grandma and mom looked at the plants as God’s colorful gifts that filled the soul and eyes with beauty. The colorful and scented blooms were mom’s treasures.

Grandpa gave me a box of watercolors one year and, without consulting mom, I painted a small red rose on the wall by the couch where I slept. Each morning, when I first opened my eyes, I saw the rose.

We did not have any paintings or pictures on the wall except my parent’s oil portrait from their imaginary wedding. It was a fantasy wedding portrait as they were too poor to have a proper wedding and a formal dress. I wish I had that painting today! It had been long confiscated by God knows who.

Nature’s colors amazed me and I often dreamed that someday, when I could afford to, I would never wear anything else but bright colors, teal, pink, purple, lavender, grass green, magenta, orange, white, and reds.

I often wander in the woods to capture on camera nature’s palette. Fall is a symphony of yellows, browns, greens, and maroons that take my breath away. My husband laughs that I must have photographed the same trees for the last ten years but to me, each autumn brings another shade of color that I have not seen before with my naked eye. And the sun adds that little sparkle, a glint of gold, orange, pink, and cerulean blue streaking from the soft white clouds.

The fragrant green fir trees at Christmas and the tiny real candles we lit, the few glass ornaments, brought a warm glow of yellow light, joy and color to our otherwise drab existence.

One summer mom bought enough material for a new dress. It was not often that I got a new dress. Everything had to be altered, let out, let in, and hemmed to last several seasons. The print was small red roses with green leaves set in a black background. My seamstress aunt‘s masterful fingers created a work of art without a paper pattern. Every time I wore it, the splash of color made me feel special and I rode on a cloud of happiness all day, bathed in the hues of red and green.

My wardrobe today is an eclectic splash of cheerful and sunny colors. It’s not hard to find me in a crowded airport. To me, black is for somber occasions and funerals; navy is ceremonial; and brown is best served in dark chocolate.

The whiteness of snow is still so pristine that no garment can possibly match it. But I wear white long after Labor Day, a bright spot in a crowd of winter.