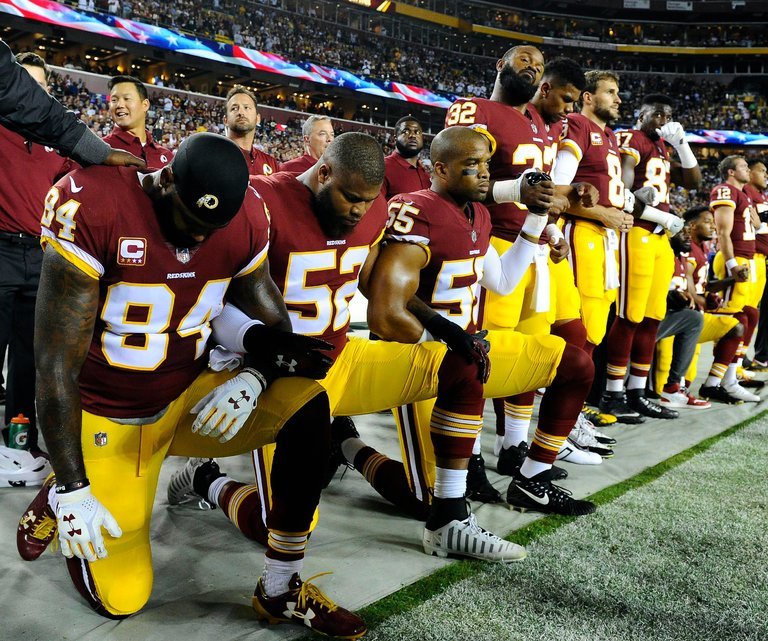 Yesterday was National “Forgot to Tie Your Shoes” Day, or so it would appear with so many people kneeling during the National Anthem for NFL Sunday.

I remember a day when, as a kid, I would look up to athletes. I didn’t look up to them because of their political views, or protesting movements, or bickering because they weren’t paid enough, but because they promoted teamwork, perseverance, and athletic might. But even more importantly, because they represented my hometown, where they’d travel all across the nation and battle against other teams on my behalf in hopes to bring home the glory of victory to my little nook of the country.

It’s an interesting parallel that has me, as an adult, in great admiration of our armed forces, who travel all across the world to battle, and often die, on my behalf to secure the freedom I have to turn on the TV Sunday afternoon to watch my favorite football team play, without fear of whether those freedoms, or my own life, will be there for me tomorrow.

The defining difference between these two groups is: one gets paid millions to take a knee in protest against an imperfect country, while the other gets paid little to take a knee to thank God they could live to fight another day to defend and make their country more perfect.

I am in neither of these groups, but if there’s one thing these athletes have taught me this weekend it is this: Turn off the TV on Sundays, and take a knee every day for God to watch over the armed forces who may not make it to next Sunday’s big game, because those men and women have prioritized to defend you and me so we can strive for a more perfect union.

NFL players are dupes. First, an attention whore named Kapernick felt his 15 minutes of fame ending. Since he had no room left on any exposed area of his body for another tattoo he decided to take a knee during the national anthem. That bought him another 10 minutes of fame. When asked why he was kneeling he babbled something about the American flag oppressing people of color. Nobody could remember exactly what he said because nobody was listening. Like in any other schoolyard of adolescents some of the more delinquent saw what Kapernick was doing and did the same. While it garnered some attention nobody paid much attention.

About a week ago there was one of the regular meetings of the secret Billionaire Boys Club. Trump was there along with the various NFL owners. As always at these secret meetings of billionaires there was a lot of complaining about all the problems being rich caused. The NFL owners were complaining that Americans were losing respect for them just because they were immensely profiting from a sport where the athletes collided with each other with such violence that they were undeniably maiming and killing each other through repeated concussions.

“Mr. President, we need a favor.” said the owners
“OK, what do you need?”, replied Trump
“We need a diversion. Can you stir the pot with some comments about the players kneeling during the national anthem?”
“What good will that do?” asked Trump
“We’ll side with the players and they’ll be so grateful that they’ll stop hating us for killing them. We can even imagine the players we are killing kneeling on the field with us with our arms locked with theirs while the TV cameras roll.”
“Nobody’s that stupid.” said Trump.

Very well and heartfelt Aaron. I say to everyone who wants to mock us who support the flag and stand for the anthem, read this again. Its not misplaced patriotism – its coming from a place of love.

Such a shame that a sport — the most successful professional sport franchise in the world — whose appeal transcended political, racial and religious groups, is now steeped in partisanship. My suggestion to the NFL is to just hold the national anthem before their high-salaried pampered players take the field if so many of them really feel the urge to demonstrate against “police brutality” or Donald Trump. My suggestion to fans is to just not bother watching the pre-kick ceremonies. this will depress advertising revenue substantially (there a re a lot of commercials before the game starts). Of course, we may soon see players “taking a knee” during huddles or doing other political crap when they score touchdowns. Unbelievable this is happening in our country, but frankly, Trump needs to stop talking and tweeting about it. it only helps CNN and MSDNC ratings.

These anti-anthem and anti-flag stunts are nothing more than ambushing the audience as happened when the caste of “Hamilton” ambushed Pence. Fool me once, shame on you. Fool me twice, shame on me.

These protests are more against trump than anything else. It is hilarious to watch him blow a gasket when people don’t like him. Too bad he is not simultaneously working on the real issues like getting Puerto Rico livable, fighting terrorism, improving the economy, fixing health care, etc. But then again, he is YOUR hero so that says so much about your own priorities

Most of the owners sided with the thugs for one reason, money. Turn the game on, enjoy it. Just boycott the advertisers products. You have to cut the money off. Everytime you use an NFL sponsores product, you are taking a knee.

Oh, and Trump planned this little Friday nite fiasco. It was no accident. He is a money pit for the media. It’s a con job presidency. The media is choking on the cash Trump is making them every minute.

Jim,
My wife and I agree.
We will be removing our Direct TV. You can keep you Sunday ticket D TV
There will be more for us to remove from our household.

You know the NFL is in trouble when they lose a 45 year fan like Rush Limbaugh, https://www.rushlimbaugh.com/daily/2017/09/25/with-great-sadness-i-did-not-watch-the-national-football-league-on-sunday/ The NFL needs to fix this, now.

The last time I watched an entire game was the Redskins Super Bowl Victory back in 1982. I could never see the draw of parking one’s butt in front of a TV on a Sunday afternoon, wasting time, and rooting for pampered, overpaid athletes. I’d rather go hiking, swimming, or do garden work. I have noticed for a long time that sports coverage in general has tilted left, and I think it began with the fawning over Mohammed Ali, who as a member of the racist Nation of Islam, got away with uttering lots of racialist things that would have placed a white boxer in hot water. As this fiasco plays out, I am hoping that advertising revenues will o down, down, down, and along with that, the salaries of these guys, many of whom would otherwise be in jail.

Some of these Stadiums are built using Tax Payer Dollars.
Just saying.

and that investment return both economic and social benefits to their communities . Just saying.

Capitalism for any or other events will always find another way.
I am not a fan of potential dribble down economics created by subsidizes.
I have never been in support of Rich Owner sport team play grounds.
If a owner thinks it is viable enough for a return than he can penny up, almost always when you come with your hand out I slap it.
Charity starts at home.

SD,
I basically am against most forms of welfare ; General welfare for the physically capable, Corporate or Legislative.
I am a stubborn blowtard!
I build homes for a living and I am dead set against mortgage interest deductions.
Home builders are the biggest cry babies next to these football players.
Home Builder Association Members all over the Country line up with their hands out for Section 8 housing projects, then piss and moan; I can’t find Americans to do the work

I am a different kind of Conservative. My biggest saying is;
off your a$$ , on your feet, outta the shade and in the heat.
Working men are doers.

Players are right, they have the right to free speech.

… and so do I, and I am behind the boycott, an exercise of my own free speech rights.

To hell with the NFL. They can take their politics, their over priced t-shirts, their stupid stadium rules, and all the rest and CRAM IT.

They have a right to free speech and their bosses have a right to fire them, fine them, penalize them. Most people don’t have a right to say or do anything they please at their place of employment. Why don’t some of these overpaid brats put their money where their mouth is and put some money into our inner cities to help poor, Black kids get the education they need and deserve. Their are hundreds of programs to help Blacks. Why aren’t these NFL brats helping them?

Wrong, no such contract!

I started reading the first sentence and stopped.
The last Sunday in September is Gold Star Mom Day.
Can you imagine that feeling every Day?