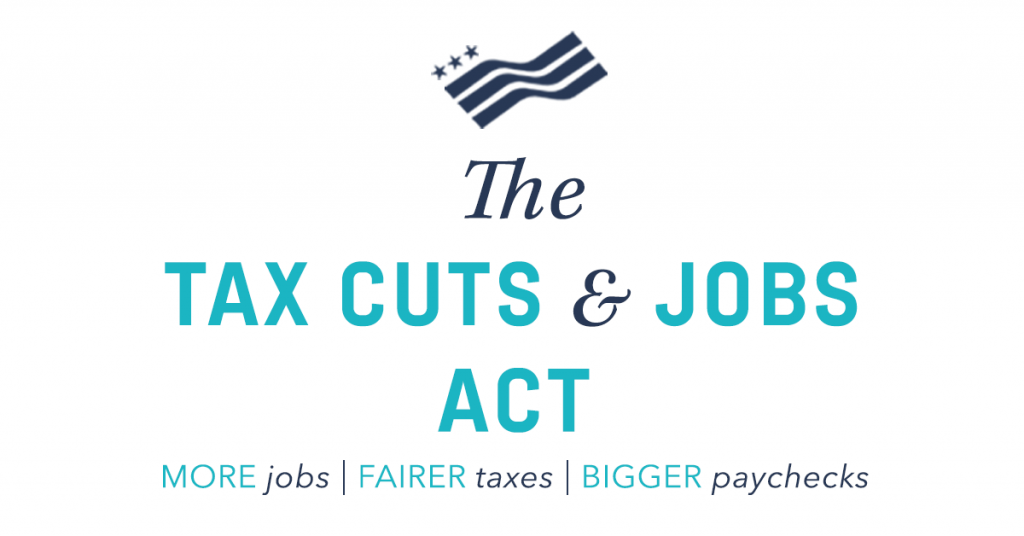 The Tax Cuts and Jobs Act of 2018 will create 218,000 full-time equivalent jobs across the United States this year, asserts the center-right Tax Foundation, which specializes in analyzing the impact of tax policy on the U.S. economy. 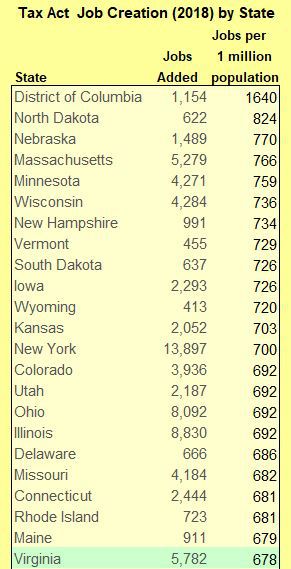 Using its Taxes and Growth econometric model, the Tax Foundation provided a job-creation estimate for each of the 50 states and Washington, D.C. In Virginia, predicts the model, the economic stimulus of corporate and personal income tax reform will create 5,782 jobs.

That number compares to 20,100 total jobs created between Dec. 2017 and May 2018, according to U.S. Bureau of Labor Statistics data. Annualized, Virginia was on track for creating 48,200 jobs in 2018, suggesting that the tax cuts are accounting for about 12% of the state’s job growth.

The tax cuts’ impact on Virginia falls in the middling range compared to other states. The 5,872 jobs created in Virginia amounts to 678 jobs per 1 million population, according to Bacon’s Rebellion calculations. On a jobs-per-population basis, the impact ranges from 1,640 in Washington, D.C. to a mere 110 in Oklahoma, both of which appear to be anomalies. Excluding those two, the impact ranges from 564 jobs per million population in Mississippi to 824 in North Dakota.

But, there is proof of the massive increases in the costs of fuel, health care, prescription drugs, and the cost of debt or borrowing money.

If the tax cuts for the rich are so good, the economy on fire, then why is Trump calling for phase 2 with our $21 TRILLION DEBT? BILLION DOLLARS PER DAY IN INTEREST??????

The Republicans proved for 7 years that they are nothing but liars by not doing their promised R&R on Obamacare.

The Trump administration is nothing but a lie.

Oh, and about those 50,000 illegals crossing the border each month under Trump, and the largest single month trade deficit with China in our history…..thanks Donald!

You know, if I thought for a moment that Democrats cared about the national debt, illegals crossing the southern border, or the trade deficit with China, I might credit your criticism. But I don’t. Because it’s transparently disingenuous.

The Democrats do not care, and I am not a Democrat. But, seems neither do Trump nor the Republicans care. This isn’t sbout Democrats, Obama, Hillary, or even Jimmy Carter. They are out. Long gone. The Republicans now OWN Washington.

And, what about the 7 year lie? Probably the biggest lie in the history of US politics.

This is about MY economy.

Illegals are still crossing the border.
I believe the tax cut has spurred job growth.
Now for Trump ( who I supported in the primary and still support) to have 100% credibility against illegal immigration must combat the illegal employment of the illegal aliens, who I will see on neighboring jobsites tomorrow.
I don’t know about all of Virginia but Bedford County, Campbell County and the City of Lynchburg are uninitiated with them.
I have a very good working relationship with the County and State officials that I have to work with, I know the Santurary Employment under our Democrat Governor and Republican General Assembly is growing.

It seems that the only way to get Democrats to acknowledge our nation’s problems with uncontrolled debt spending, uncontrolled illegal immigration, and runaway trade imbalances is to turn each problem into a way to criticize a Republican. Then it’s all important to them.

But we know it’s not. Your members of Congress constantly remind us that the debt doesn’t matter. The chair of your party says he prefers no borders at all. And Democrats have made an inter generational habit of kowtowing to the tyrants in Beijing. You’re a phony.

There is nothing Democrats or Republicans will not say to get elected. Just look at Hillary and Trump.

Republicans have struck out with Trump. So, they continually talk about Democrats as they have nothing of their own to claim victory with. Just look at the way Kim Jung Un and Putin “politically pimped” Trump.

Like it or not, Trump is the current leader of the Republican Party, just as Pelosi currently leads the comedy of the Democrats.

And, like it or not, me, you, and everybody else on this planet is stuck here with each other.

Let’s do the math on this:

I don’t understand your comment about Trump’s tax cuts being unpaid. What’s unpaid about government confiscation of the citizen’s wealth? It’s not their money. The government needs to go on a diet and quit wasting our money!

The hard part is cutting spending. It was irresponsible to put this tax cut on the national debt side of the equation. You might have a point if spending had been cut first (and Republicans taken the political hits for the cuts). But, the Trump GOP just shifted tax liability to the tune of $1.5 Trillion from corporate ledgers to our children. Trump made out well though. Thanks, GOP!

They’re “unpaid for” because they didn’t cut spending 1-for-1 with the amount they cut taxes. That creates a a budget deficit, which is then rolled onto the national debt for me and my children (and yours) to pay back later with interest. In this case, Congressional Republicans added $1.5 trillion over 10 years onto the national debt.

You let me know what you’re willing to go without (Medicare? Social Security? Highways?) to pay for this debt.

Excellent news! And this increased economic activity will continue to have snowball effects, so it’s only going to get better.

Then now appears a time better than ever to combat the fraudulent underground employment (of all nationalities American included) , if not then those who disagree welcome the Santurary that comes with it.