Your Taxportation Dollars At Work

For those still wondering why you’re getting that light-in-the-wallet feeling, Governor McDonnell revealed today one of the reasons why it was so important to enact the largest tax increase in Virginia’s history. Apparently–and I know you’re as excited about this as I am–one of the most pressing transportation problems in the Commonwealth, a desperate problem in search of a solution for decades: the lack of Amtrak to Roanoke.

Due to 2013 transportation solution, passenger train service will return to Roanoke for the first time in 34 years http://t.co/jWm2ur9Wba

Unimpressed? Good to know it’s not just me. Really, this is hardly the sort of dire, pressing need the Governor cited to justify last spring’s Taxportation boondoggle. Yet, it’s apparently worth raising taxes by at least $102 million, plus another $3 million to help the City of Roanoke cover the cost of building a station. And we all know that by $102 million we probably mean another some-odd million for the perpetually unexpected “cost overruns.”

Wouldn’t the taxpayers be better served by allowing the free market to support any expansion of rail to Roanoke? Is I-81 traffic really that bad!?! Worse enough than I-95 or I-64 that this $105 million dollars is best spent on a mode of transportation that WE KNOW WELL IN ADVANCE IS NOT ECONOMICALLY VIABLE? And, no offense intended to those at the southern end of the Valley or Southwest, but there’s just not that many of you who are going to need to hop on that train to Lynchburg anytime soon.

For those at home not doing the math, that equates to almost $1,100 for every one of Roanoke’s 96,000 residents.  So, we’re paying $1,100 to allow each one of them the privilege of paying again to use a system that costs more than driving and gets people to their destination much more slowly.  So, when you put it like that, what are we waiting for?!?

But I digress. It seems some folks are really enthusiastic about this.

So, it’s about economic development? If that’s the case, why not “invest” even more? In Democrat-run California they’re building more passenger rail to promote “economic development” on the taxpayer’s dime, too. But they’re spending BILLIONS!! That’s what you get with Democrats.

I guess in Virginia we’ll have to settle for Democrats-lite. 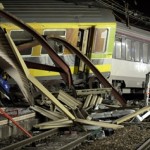 Your Taxportation Dollars At Work was last modified: May 13th, 2015 by Chad Ochocinco

[…] defections of these two (and, less frequently, Sen. Emmett Hanger).  It also means that thoroughly un-conservative legislation that the Speaker passes in the House gets carried by a Democrat majority in the Senate that relies […]

So is this a train TO nowhere or FROM nowhere?

Neither … its the train for no one to nowhere