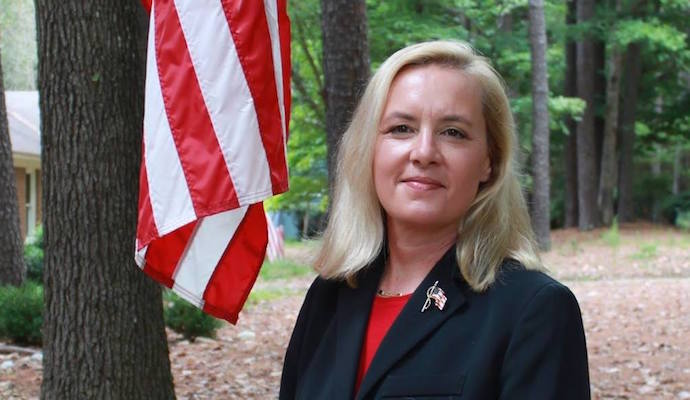 Former Chairwoman of the James City County Board of Supervisors, Mary Jones, is expected to announce her candidacy for U.S. Congress today in a Facebook Live event at 2:00 p.m.

Jones will take on first term U.S. Rep. Scott Taylor (VA/R-2) in the GOP primary next June. Taylor upset 4th District incumbent Randy Forbes in a Republican primary in June 2015 to capture the 2nd District seat held by Scott Rigell since 2010. Forbes decided to run in the 2nd District when the courts redrew the 4th District, making it a likely Democratic seat.

The 2nd Congressional District includes Virginia Beach, the Eastern Shore, and much of the Peninsula.

Sources tell me that Jones is calling donors and telling them that Taylor is pro-gay rights, and therefore, needs to be defeated. In addition, it appears her campaign will initially be based on a platform of defeating an establishment Republican.

Only problem is: Taylor defeated an establishment Republican –Forbes—two years ago.

Taylor, a former Navy Seal and tireless campaigner who connects with his base, is an overwhelming favorite to win re-nomination.

Under normal circumstances, I would rate this challenge as gadfly status, with Jones getting about 20 percent of the “burn it to the ground” protest vote.

But that all changed when Sen. Bryce Reeves (R-Stafford) sent out a statewide mailer blasting his GOP rival in the June 13 Lt. Governor primary race, Sen. Jill Vogel (R-Fauquier), for voting in favor of a gay judge.

I thought the mail piece would backfire on Reeves. It did the opposite, and almost propelled him to a late upset victory.  That mailer taught me a lot about the state of some Republican primary voters on the issue of gay rights in Virginia.

So we are not writing Jones off – just yet.

Liberal firebrand Tom Perriello, who lost the 2017 Democratic gubernatorial nomination to Lt. Gov. Ralph Northam in June, is now leading the effort to elect Democrats to the Virginia House of Delegates in the fall campaign.

But some Democrats are telling me privately that Perriello is doing more harm than good.

They cite several tweets he has sent, including one calling on the Rev. Jerry Falwell Jr. – a Trump supporter – to obtain an “exorcism” to rid himself of the devil’s grasp.

“The devil has his grip so firmly around [Falwell] that I’m praying for his exorcism,” Perriello tweeted in mid-August, followed up by this tweet: “White evangelical leaders, your whiteness is the golden calf you choose to worship and idolize, in blasphemy of God’s word. #RepentNow.”

The Republican Party of Virginia (RPV) was quick to condemn Perriello’s remarks.  “It is never acceptable to slander and smear a religious group,” the RPV said in a press release. “We demand that Tom Perriello immediately apologize to Jerry Falwell Jr. and evangelical Christians.”

To make matters worse (or better for some), Perriello has doubled down on Virginia’s statues and monuments removal debate, calling them “mythical” and chiding opponents for not calling for all Confederate monuments and plaques to be removed.

Some Democrats I’ve talked to are grumbling that Perriello’s high octane salvos are not exactly helping the cause of their candidates, many who are running in traditionally moderate districts held by Republicans.  One high placed state Democrat source told me, “It’s all about him. His position should be behind the scenes, seen but not heard.”  Other high ranking Democratic officials have said privately they are not impressed with Perriello’s group. “He’s over-paid and underperforming,” one offered, who requested anonymity to talk freely.

Several sources told me Perriello got the job at the behest of a small group of powerful Northern Virginia donors, who believe Clinton’s loss could have been avoided if she ran on the progressive principles that Perriello champions.