TBE election predictions from our staff and contributors

Well, generally I would say no one knows. I have a strong suspicion that polls are not capturing the undercurrents of this election. Perhaps I’m being hopeful not realistic but this has the feel of a continuation of a revolt. I feel about this as I did 2016 where I believed Trump was riding a wave and predicted he would win. I know the polls say otherwise, but…..

Otherwise I would say that any conservative or Republican who does not vote straight R, regardless of personality is voting for the radical lefts dream of “mob rule,” and the dismantling of the Republic.

Comstock too close to call

GOP Keeps the Senate adding 2-3 seats
Control of the House too close to call.

Comstock loses by 12
All else is chalk

Comstock will defy all odds and win

Corey Stewart has no chance

Thomas Oh fails to get 25% against Beyer.
Jeff Dove gets around 40% against Connolly.
Wexton puts paid to Comstock 54% to 46%
Brat survives in a razor thin race against Spanberger
Riggleman wins by around 10 points.
Cline wins by around 20.
Taylor wins 53% to 47% over Luria.
MacEachin and Scott win by wide margins.
Griffith and Wittman win by wide margins.
Stewart loses by 18-19 points

In the Senate I see an outcome of 52-48 under Republican Control with key Victories by McSally in AZ and Heller in NV. They have been trending in the right direction and Democrats haven’t gotten the early voting tidal wave to offset the greater numbers of Republicans who show up on election day. Trump approval rating according to recent polls is in the neighborhood of 46-47 which is not enough to heavily sway the independent vote.

In the House I see Republicans narrowly maintaining their lead with a nail-bitingly thin 218-217 majority. Again, early voting numbers would need to be in the 60% plus range of Democrat favor and they are closer to 57%, whereas more Republicans show up on election day. Trump approval ratings again are not as low as Dems would like them to be in places like Florida, North Carolina and many western states; yet Pennsylvania especially the 16th and 5th districts could easily flip blue according to recent polls. North Carolina’s 9th, Ohio’s 12th and Florida’s 27th are also GOP leaning but experiencing high Democrat turnout. All in all, I have 198 safe red districts then 32 toss up seats. Twenty two of those tossups seats are in districts that went for Trump and Romney. 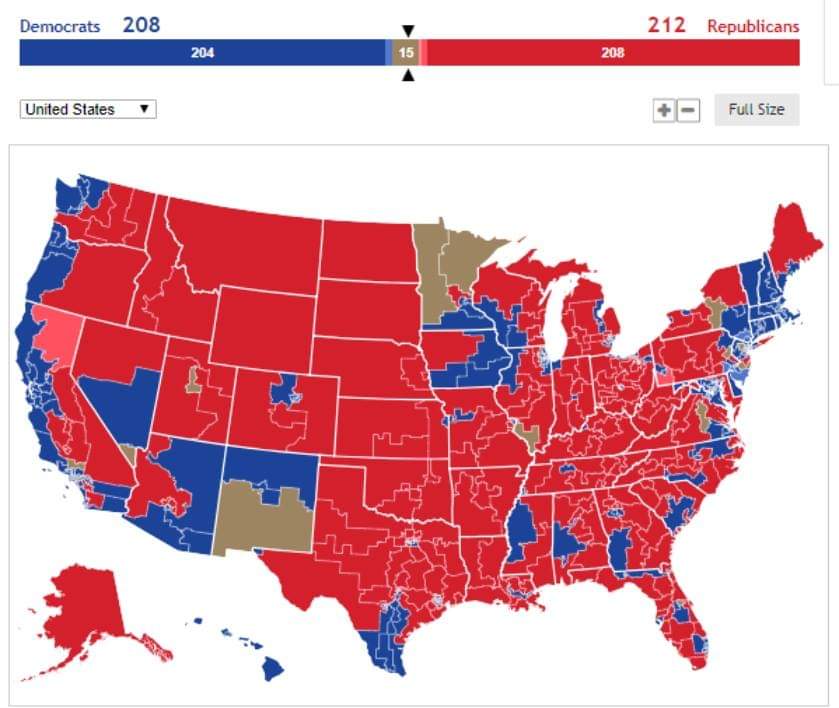 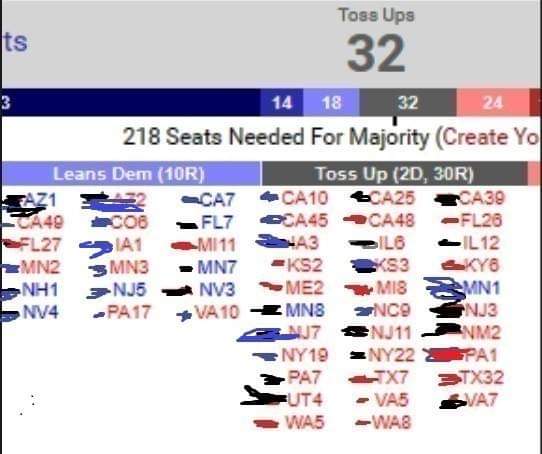 This election is really hard to judge, based upon data gleaned from 2016 and the ever present misleading polls.
The best data comes from early voting turnout and absentee voting.  Adding that together I see 3-4 US senate seat gain for the GOP and the House being a very close contest.  Right now I am leaning towards the GOP holding the House by a slim margin.  And if they do, maybe this time they will realize they have to act like Republicans to keep the conservative base.
I also think that if the Democrats somehow win the House, the  leadership they have picked will be such a dumpster fire, that it would lead to a huge Republican tsunami in 2020.  Maybe that is the best result.  For many of the Republicans in danger this election are at best considered moderates and it would help energize the base for the most important election, the 2019 Virginia State Election Cycle.
Sorry, but given the state of our Republic we need constitutional warriors in office, for socialism is just around the corner if the Republicans play compromise games any more.  In fact, we are almost there already.
We need to be on the offensive, fighting to tear down 100 years of socialism rather than just holding the line as it is right now or slowly giving it away as many Republicans compromise it away.  Maybe a cleansing is needed.
But you asked for a forecast-

Comstock loses by 6 pts
Kaine barely holds back Stewart.
Rigglemen and Kline win.
In other national races, I see Morrisey beating Manchin, Cruz cruising to victory, Massie and Amash easily winning their races and Wendy Rogers being a pickup for the GOP House Caucus in Arizona.
But like everyone else, I am buried in races I am working on, so maybe my view is tinted red.

My prediction for Election Day is that Republicans will hold both the Senate and House with comfortable margins. (“Comfortable” meaning enough capacity to advance the Trump agenda.)
This prediction is based on “gut feeling,” not a scientific poll.  So that probably makes me an outlier.  My “gut feeling” is based on these factors:
1)  I believe that America experienced Divine intervention on November 7, 2016, to breathe new life into our Republic.  And it’s not going to evaporate next Tuesday.
2)  Donald Trump is a force of nature.  He is accomplishing more than can be seen, but that is reflected in historically low unemployment numbers, a vigorous economy, renewed respect for American might around the globe, and resurgence of confidence in the American spirit.
3)  During the Kavanaugh hearings, I sensed a sea change benefitting Republicans around the country, not necessarily affecting every GOP candidate, but certainly bringing attention to the lunacy of the Left that was enabled by Democrat Party leadership.  The depth of disgust over the Left’s dangerous antics was enough to get voters’ attention and consider what the Republican Party has to offer.
4)  The advancing migrant “caravan” only puts in sharper focus the necessity for border security and immigration reform — two key components of the Trump win in 2016.
5)  Finally, have you seen the astonishing energy of the Trump rallies?!  They may be the most important harbinger yet of what is to come on Election Day.  Democrats have nothing like it.

I forecast the republicans pickup 5 in the US Senate to take them to 56.

Va 10 a virtual tie that breaks in favor of the challenger.

I firmly believe that the lack of support for Corey Stewart by the NRSC will result in his loss in a race he could have and should have won.

I also believe that if I am correct in estimating the republicans control both house and senate, there will be major rioting in the streets and conspiracies and lawsuits galore.

Republicans pick up 3 seats in the Senate. We hold the House by 2.

Virginia:  Kaine beats Corey Stewart, but Stewart’s name recognition in Prince William County (which is now the 2nd largest voter pool in the state) will make the race closer than experts think.  Kaine might not break 60% of the vote as a number of polls and experts suggest.

Wexton beats Comstock by 3-5 points in the VA 10th because Northern Virginia (particularly Loudoun and Fairfax) is now heavily minority and loaded with ex-Northeasterners.  It’s “North Jersey Virginia.” Wexton is a stronger candidate than was Luann Bennett in 2016, who bested Comstock in Loudoun by 1,000 votes.  Clinton won the 10th by 10 points over Trump and Northam romped here for Governor in 2017.  If Comstock loses, it means the DC area (DC, Maryland, Northern Virginia) will have no Republican House or Senate member.

Brat beats Spanberger by 1 or 2 points in the VA 7th.  She carries Chesterfield County, but his incumbency and fact rest of district is Republican and Trump Country will carry him to a narrow re-election victory.  Trump carried the district by 6.5%.

Taylor beats Luria by 4 or 5 points in the VA 2nd due to his incumbency in a conservative-leaning district that Trump won by 3.5%

Riggleman, Cline win their respective races.  No other surprises in House races.

Surprise of the night – Black voters either vote Republican or sit it out because of the bad behavior of the Resistocrat elitists, and improved economy, and growing like of Trump.  This will limit the “Blue Wave” but Democrats will narrowly take control over the House since there are so many swing districts that are open seats. Republicans should be able to pick up net 3 seats in the U.S. Senate. But the black vote will come out for black Democratic gubernatorial elections in Florida and Georgia, and they may win those elections.

“Sore Losercrats” will claim GOP voter suppression in order to delegitimize the elections like they have been doing with Trump since 2016.

For me, this is a very difficult year to predict outcome because of the mainstream media being a strong wing of the Democratic Party.  At the end of the day, I still believe there is a silent majority who (like me) thinks President Trump is doing a great job.  If I am wrong, God help us; it will be a long two years.  Here are my predictions…

I remain optimistic…or maybe I am just a fool…we’ll see.

Brat wins by 3%. He would have won by more if big Democrat PAC’s from across the nation hadn’t given his opponent many millions to produce ads filled with lies.

Barbara Comstock pulls it out by a slight margin

Corey Stewart does better than I originally expected 42%, Kaine 55%.

TBE election predictions from our staff and contributors was last modified: November 6th, 2018 by Jeanine Martin

[…] and staff at The Bull Elephant have predicted the outcome of today’s elections and they deliver about what you’d expect from true believers.  Most think the GOP will hold the […]