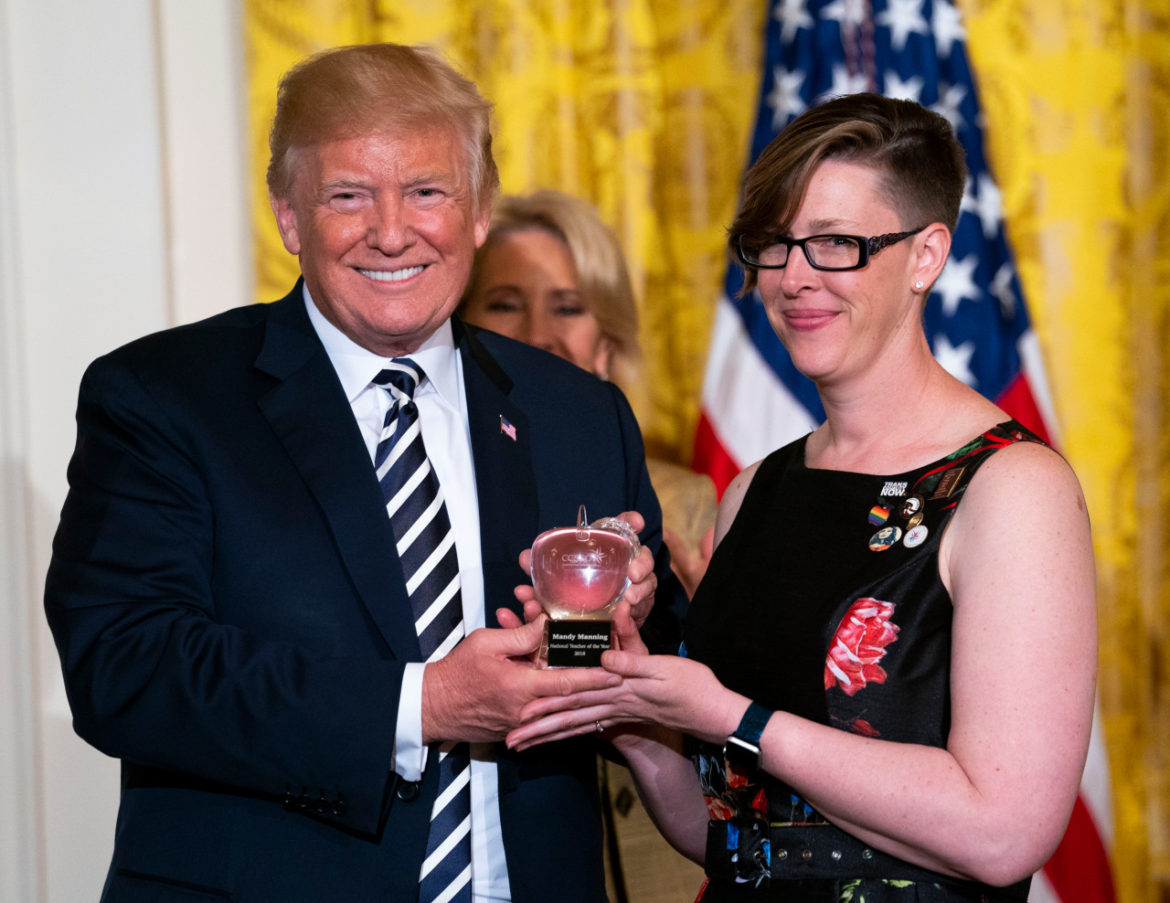 Teacher of the Year Award

As a former teacher, I was annoyed but not at all surprised by the choice for this yearâ€™s Teacher of the Year Award. The recipient with a political agenda showed the nation what an â€œexceptional teacherâ€ looks like. With her boorish and rude behavior during the ceremony at the White House, she bashed and disrespected our President in front of the entire nation and in front of school children who look up to teachers like her to be objective. Yet many indoctrinate their students into their twisted political world eight hours a day, not into the American-exceptionalism that they should.

President Trump, exhibiting class and respect, mentioned the â€œincredible devotionâ€ that has earned her the adoration, total adoration, of her students and colleagues, the school district, community, and the entire state.â€ https://www.facebook.com/ijrredpresents/videos/179722432727814/

The petty little ideologue was not just wearing an insufferable smirk the whole time, she was rude and ungrateful and refused to shake the presidentâ€™s hand or clap when appropriate. Â Honored for her â€œadorationâ€ in the classroom, she could not muster the slightest propriety for the moment and the place. Â

Her rudeness and lack of decorum are a disgrace to the profession. There are so many deserving teachers out there who work in the education trenches every day without being recognized for their work because their politics are of a different kind than the Democrat-sanctioned socialist plantation of Marxist adoration.

Selecting a Teacher of the Year begins at the local level and each school district has their own criteria that tend to match the national guidelines. You will be very surprised to know that parents and students have nothing to do with the selection process even though they say the nominee is adored and respected by the community which they serve. The high ranking administrators form a selection committee composed of administrators, teachers, educational service personnel, student support personnel, and past Teacher of the Year winners and nominees.

Some common denominators are membership in the National Education Association (NEA), American Federation of Teachers (AFT), with their financial support for the Democrat Party, and other university-sponsored organizations who are mills for future teachers.

Teaching awards are nothing but a Democrat popularity contest of who is the most progressive, outrageous, and anti-American progressive ideologues in good standing with the top administrators and other decision-makers who can send that person to the top of the heap.

The nominees usually push the latest fad in education, currently the Common Core curriculum. The top nominees believe in global education, global citizenship, no borders, the anthropogenic global warming, the rights of the illegal aliens and refugees that trump those of American citizens, alternative lifestyles, Islam over Christianity, and deviant sexual behaviors promoted as the norm and introduced by force into the classroom as early as kindergarten in some states.

Mandy Manning, this yearâ€™s awardee, is an English teacher in Spokane, Washington, and teaches refugees and immigrant children from countries like Syria, Iraq, Afghanistan, Guatemala, Myanmar, Mexico, and Tanzania. It is no surprise that a political person like her would be chosen as a spokesperson for an entire profession. https://www.yahoo.com/news/mandy-manning-teacher-handed-trump-080024349.html

No mention is made whether these immigrant children are legal or illegal as it does not matter to liberals if we follow the law as long as we have more future Democrat Party voters in our midst.

Is it any wonder that such â€œeducatorsâ€ are turning our children into communist agitators and snowflakes, with no allegiance to our country, our history, our sovereignty, our flag, our pledge of allegiance, God, and to a sound education?

Based on the buttons she was wearing during the ceremony, a rainbow apple, Transgender Rights, Womenâ€™s March, and the letters she gave the President from her immigrant students, this person obviously puts the interests of immigrant children, refugee children, and a womenâ€™s movement that embarrasses at least half of this countryâ€™s female population ahead of Americaâ€™s studentsâ€™ interests.

Teacher of the Year Award was last modified: May 7th, 2018 by Guest Contributor Dr. Ileana Johnson

She got her 15 minutes of infamy (apologies to Andy Warhol). She should get her money back from her barber.

The collapse of serious education standards witnessed by the three decade slide of American world rankings in math, science, history and literature and the still declining SAT scores, all wrapped up with the collapse of the traditional family structure, and encouraged by a entertainment industry that is committed to cultural deconstruction have left us with the public manners of toads. The worst possible langue is now unexceptional from both sexes of any age in any settings. The basest manners in public behavior is accepted without comment. The grossest table manners have no economic break. Many people seem downright proud to deal in any lie for any purpose, or no purpose at all. Writers and paid trolls (even on are own site!) make horrible comments about people and their families, ignoring the issues raised. I’m afraid the whole society and culture is infected with this horrible rot, and I have no idea of what can reverse it. That this young woman is held up as a model says it all, regardless of her technical expertise.

The nomination should start at the parental level having children currently enrolled in the system.

Sometimes there is more than teaching envolved.
I will never forget a male gym teacher walking up to the smoking pit and getting us boys to put down the smokes and come down the hill and play football.
That wasn’t about anything but being a Great mentor.
Thanks Coach Scharnus!
But what do I know I am old as dirt and a “one note wonder”

A â€œteacherâ€ from the State of Washington is going to be an extreme leftist to get such an award regardless of who her congressman is. The nomination process is skewed by the public education unions/associations and none of them are conservative.

Demonstrably incorrect, a falsehood on your part. Even a tiny amount of research shows that the CCSSO is non-partisan, controlled by the states, and chose a winner last year who claimed no union or NEA affiliation and was a charter-school teacher.

That is the concern I have. Has it been corrupted by the left. We know, thanks to surveys, that the overwhelming majority of academics are from the left and not much inclined to operate in a non-partisan manner. We also know that many supposed republicans have fallen victim to the siren song of political correctness.

This teacher’s Republican congressman is proud of her.

â€œMandy Manning is an asset to not only Spokane-area students, but to schools throughout our state and nation.

â€œWhen I first met with Mandy and her students last June, it was clear from the moment I stepped foot in her classroom her dedication and enthusiasm for teaching knows no bounds. Meeting three of her former students this January only reaffirmed those first impressions.

â€œThrough Mandyâ€™s leadership, the Newcomer Center has provided students with the technical skills necessary to succeed in high school and has provided them a safe space to help them build confidence and connect with their new communities.

â€œCongratulations, Mandy, on this new honor! You are a fantastic example to your fellow educators in Washington and nationwide. We are lucky to have you.â€

CCSSO began the National Teacher of the Year Program in 1952.

I think the point is the recipient was rude and nasty. There’s no reason for that, ever, but certainly not in the White House when one is receiving an award!

It would be interesting to go back to the beginning of these awards and see if politics are now intruding in the selections. The left has invaded academe at all levels and the awards would likely be skewed accordingly. The surprise would be if it was non-partisan.

Political Correctness is a curse that affects us all and diminishes the importance of such an award. Manning has tainted the award with her snotty behavior and that taint will continue into the future as selectees will feel they have some right to abuse a president they donâ€™t like. Imagine a pro-gun selectee who acted like this during the obama presidency – although most pro-gun folks I know appreciate the distinction between a president and the office.

By the way, Democrats feel entitled to abuse those they disagree with. You see it all the time with name calling rather than attempts at rational discourse. The selection of Manning and her behavior is but another demonstration of this premise.

You are a censor for deleting my reply, which contained no personal information or banned content. There is no fair comment here anymore. You’ve decided to protect Friends of Jeanine from even polite discourse. It’s wrong and you know it but you do it anyway. Even Republicans on The Hill think this place is a farce and discredits their party.

Creepy stalker? Is that how you justify your behavior? That you are a creepy stalker who simply must creep and stalk? Seriously?

Because you do stalk. Although creep simply comes naturally to you.

But I t was certainly nice of crazy eye to get all dolled up for the event.

The President displayed he is a made of IRON;
I am
R esponsible for
O vercoming
N egativity

It takes IRON to make IRON!

Always good to take the high road
eventually the other side will hang themselves, won’t they SBT?