Latest Posts
REMINDER: Tomorrow’s Meeting!
Richmond to Parents: “You’re on Your Own”
Polls and Purposes
COVID-19 spreading faster in Europe than in the...
Weekly Laffs
Heavy, heavy, early voting in Virginia–1.2 million and...
School enrollments down in Virginia, threatening millions in...

The likely democratic nominee for Congress in the 10th district is Dranesville Supervisor John Foust.   He is not universally embraced by democrats in the district as is apparent in the advertisement below from the Fairfax County Federation of Teachers. On February 8th the tenth district democratic committee voted unanimously to hold a convention on April 26th  to choose their nominee. Details here. 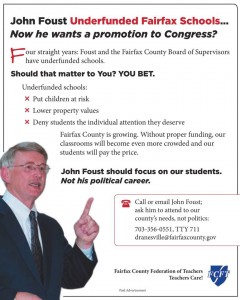 Why Court Packing and Senate Packing are...