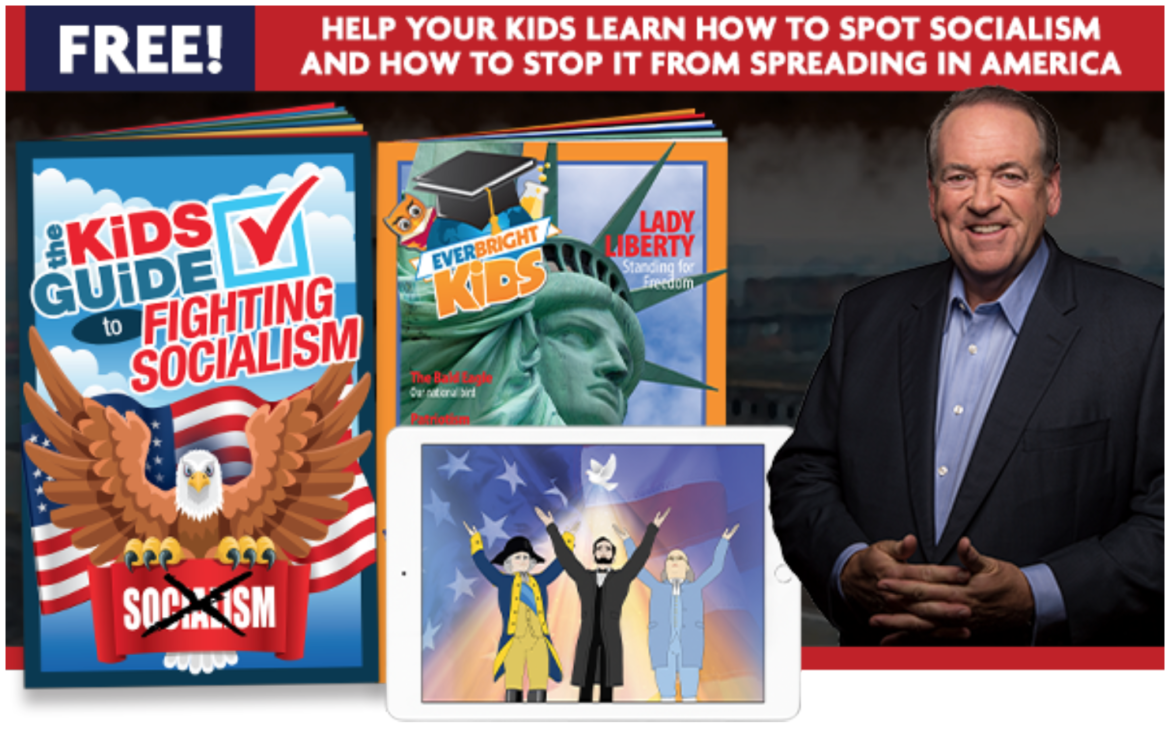 Mike Huckabee's guide to "Kids Fighting Socialism" is probably not a source of news for kids in public schools, but pro Leftist web sites are.

After watching last month Ken Burns’ three-part series on the US and the Holocaust,  which dramatized how the Roosevelt Administration was blind to the plight of European Jews seeking asylum from Nazi persecution, one thing stood out – that the underlying cause of the Holocaust was not just historical anti-Semitism in Germany and other Christian countries, but the junk science of “eugenics.”

Eugenics preached that different ethnic groups and races were superior to others – mainly, Aryan northern Europeans.  It gave a scientific rationale for racism, ethnic purity and government enforcement of racist policies in a Progressive-era movement to “improve” the genetic makeup of the population

Science eventually disproved that races and ethnicities are different biologically, but only after the murder of some 10 million “subhumans” by the Nazis, justified by “protecting” the “master race.”   However, eugenics was “settled science,” to use Dr. Fauci’s words, in the decades before and even after World War II.

It also had profound effects on American policy, notably, 30 states allowing the forced sterilization of the mentally ill against their will (about 64,000 between 1909 and 1963).

Eugenics influenced American attitudes toward race and immigration, particularly Jewish immigration from Nazi Germany.  The documentary shows how the Roosevelt Administration was very reluctant to provide visas to German Jews, even after evidence of Nazi extermination camps was in the media.  It was not just fear of adding to the unemployment situation created by the Depression, or fear of Nazi spies – but anti-Semitism.

I explore eugenics in greater length in this article on “The American Thinker.”    In this article, I will argue today’s threat is not eugenics, but how socialism and other collectivist approaches to government and economics are sanitized in America’s classrooms, and that standards should be required on how these “isms” are taught.

Despite the fall of communism in Eastern Europe, and China and Cuba becoming more capitalist, academia is filled with professors who preach an idealized view of communism and socialism, and so do our public schools, whose curricula have been influenced by “critical race theory” – which is an offshoot of neo-Marxist “critical theory.”

Coupled with McCarthy-like inquests into “hate speech,” and cancel culture, the result is our schools, media and business are populated with idealistic graduates who either know little about the 100 million people who died at the hands of communist and socialist regimes over an 80 year period, or “explain it away” under the guise of the false idol of “Democratic socialism.”

To the “woke,” the solution to all problems is more government, specifically, socialism whereby the government takes control of the economy.

Today, some 38% of Americans, according to a December 2021 Gallup Poll, have a “positive view of socialism,” and some polls show a majority of young adults do.

Is it any wonder why?  They are spoon-fed anti-American ideals in textbooks by neo Marxists like the late  Howard Zinn (who wrote “A People’s History of the United States”) or Nicole Hannah-Jones who wrote “The 1619 Project,” which established historians have rejected .

In Virginia, a number of districts subscribe to Newsela.com, one of whose content provider is the “Zinn Education Project,”   which features many articles and videos with the late Leftist professor and agitator.

You won’t find anything about the U.S. ending communism and liberating 500 million people, but you will find articles on the Red Scare and how the U.S. effort in Vietnam was evil.

According to Tiffany Polifko,   a mother of two school-age children, who is running for an unexpired one year term on the Loudoun School Board in the Nov. 8 election, the district spent some $436,000 a year on Newsela, and a schools staffer named Michele Picard gives an endorsement on the Newsela web site.  Polifko discusses the issue in this video on her web site

Newsela’s other content providers are left wing, too, including The New York Times, Washington Post and Israeli newspaper Haaretz.  No Wall Street Journal or Financial Times, and certainly none of Mike Huckabee’s “Kids say NO to Socialism.”

Textbooks also promote “woke” ideals. The State Board of Education has approved certain books   for procurement by the public schools in Virginia.  One is McGraw-Hill’s (MH) “World History and Geography, Modern Times.”

In December, MH unveiled a new edition the company says  “prioritize student engagement with lessons that foster critical thinking as well as empathy and understanding.”

There is no copy of the book online, nor previous editions, to see how socialism is treated.  But “empathy and understanding” could be code for introducing critical race theory concepts – such as that whites have “privilege” and are perpetually responsible black and brown people being victims of “institutional racism.”

Students should learn the good and bad of American and Virginia history.  However, what I am concerned about is whether middle and high school students are getting a balanced view of how America stacks up to statist and monarchical regimes through the ages. Are kids learning just about slavery, or also what Stalin, Mao, Pol Pot, the Kims in North Korea, did to their people?

The neo-Marxists of the Frankfurt School in Germany fled to the U.S. to foist critical theory upon academia, not their “utopia” at the time, the Soviet Union.

These hypocrites took advantage of free speech to foment utopian socialism among generations to students, who in turn infiltrated our institutions to rebuild them through collectivist authoritarian ideals.

We cannot stop the teaching of various ideologies.  In fact, I think it’s good if high school seniors and college students learn different theories of history, politics and economics so they can decide for themselves.  However, getting just ONE side of the story is bad news for our democracy, free speech and free enterprise, especially in the lower grades – just as eugenics had tragic consequences for how this nation treated immigrants, African Americans and the mentally ill.

According to Ms. Polifko, the state Department of Education can develop “standards” for teaching various subjects, but curricula is set at the local level.  This means the local school boards have ultimate say over curriculum, and as we know, a number (notably, Loudoun, Fairfax and Virginia Beach) have been co-opted by critical race theory in the name of “equity.”

In my view, the state MUST set standards to require a balanced picture of history, economics and other social studies.

In this article on “Bacon’s Rebellion” in May State Superintendent of Instruction Jillian Balow  said Richmond will come up with “better history standards than we’ve ever had.”

If Gov. Glenn Youngkin is serious about “parents matter” in the education of their kids, then Virginia should develop those standards very soon, and the General Assembly should codify them in law.  Hard to do with a Democrat-controlled state senate, but worth trying.

It’s also high time for advocates of free enterprise in philanthropy and business to stop endowing tenured radicals and instead finance balanced teaching of the social sciences in undergraduate and graduate studies.

A candidate Loudoun County needs on our School Board:

Teaching a sanitized version of socialism is as dangerous to our society today as the teaching of eugenics was in the early 20th century was last modified: October 6th, 2022 by Guest Contributor Ken Reid

Socialism invariably ends in tyranny and slavery. The problem occurs when government takes ever more power to itself. Take social security. If government wanted to do something here then give people more incentives to take care of themselves and others through charity.. Instead you now have a massive government inspired welfare system and homeless problem that requires huge amounts of taxation to prop up. Almost every problem can be solved by government getting out of the way of the citizenry. Those problems that clearly need government are defense of the nation. The Constitution is a good guide for limiting government and democrat socialists hate it for that reason.