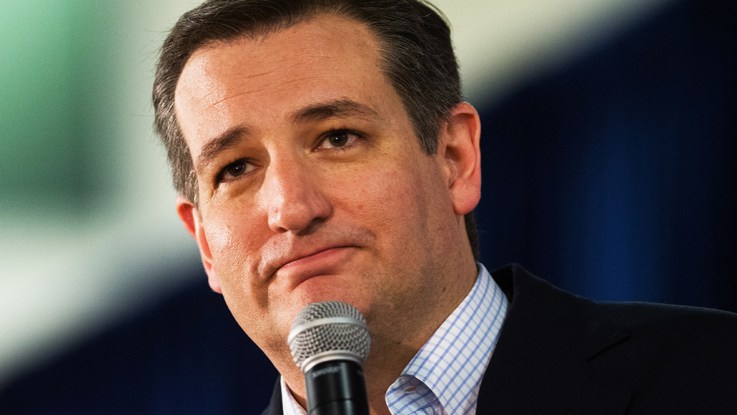 Donald Trump, Marco Rubio, Mike Huckabee, Rick Santorum, The Republican Establishment, and the Mainstream Media have unloaded all the vicious attacks they have against Senator Cruz. The net result has been to knock Senator Cruz from 1st place into 2nd place. When Donald Trump, when the GOP, when the mainstream media want you gone, you’re gone. No other candidate has survived what Senator Ted Cruz has survived. While Lyndsey Graham makes jokes about killing Ted Cruz on the Senate floor, Ted Cruz continues to make his steady case, about why we should return to first principles, to the American People.

The fact is that Senator Ted Cruz has been a consistent constitutional conservative from day one. He’s not making any new and entertaining arguments because he’s still making the same ones’ he’s always made, the same arguments conservatives and constitutionalists have been making for well over a decade.

Ted Cruz is running for President to lower our federal spending, decrease our federal debt, repeal and replace ObamaCare with free-market healthcare solutions, and to stand up against unconstitutional infringements (whether from the bureaucracy or the Republican Congress itself). No other candidate has been as consistent and faithful to a single set of principles as Senator Ted Cruz. No other candidate has been as humble, as optimistic, and as dedicated to focusing on substance during this campaign, as Senator Ted Cruz (besides Governor Kasich of course).

No, Ted Cruz won’t send all the Muslims and Hispanics back where they came from and Ted Cruz won’t make it legal to sue journalists. Ted Cruz won’t destroy free trade with tariff’s and price controls, and no, Ted Cruz won’t make other countries pay for American domestic projects. Ted Cruz believes in liberty and in continuing our Constitutional Republic. While Ted Cruz will eliminate all of Obama’s unconstitutional executive orders, he will not govern by them. While Senator Ted Cruz, who has fought valiantly against the Leadership in the Senate, does not have the best relationship with the members of that body, he will not put himself and his office, ahead of or before the legislature. Ted Cruz is not an authoritarian.

Conservatives and Constitutionalists have been waiting to vote for someone like Ted Cruz for 28 years. Now is your chance.

Now, I know all the slurs, threats, and accusations flung at Senator Cruz by establishment Senators and billionaire playboys, media-types, and even many of our friends (too easily influenced by the shiny spectacle of a billionaire with power) have damaged the national imagine of Senator Cruz. All these attacks have had a detrimental effect on his polling numbers and his favorability. Many of your friends have probably been taken in by the lies and placed their faith, not in principles, but in one mega-rich individual.

But you, you can still vote for Cruz.

You do not have to follow them down that road. I believe that the vast majority of conservatives understand that Senator Ted Cruz is exactly what they’ve been waiting for, but they have been confused by all the attacks thrown at him by a lifelong Democrat and Clinton Supporter, who somehow used his fame to become the Republican front runner. You’ve heard all the attacks and you know they are not true.

You probably even have some Trump people in your life, as friends or family; and are hearing from them unending insults and ridicule regarding Senator Cruz. You tried to change their mind, but they seem so confident and so sure about Donald Trump. Blind faith and fanaticism will do that to people. Believe me, when Donald Trump starts passing around those tiny cups of KoolAid, many people you know, people you thought would be smarter than that, will gladly lift the cup and drink. Fanaticism does that people.

But you can vote for Ted Cruz. You know he is the only principled and constitutional conservative in the race. You know that just a few months ago he had your support. It’s hard, sometimes, to do the right thing, to stand up to the bullies and malcontents, the naysayers and pessimists in your life and make the right choice for you and your family. Ted Cruz is that right choice.

Many of you know deep down that Ted Cruz is the real deal, but you have been pressured by those around you to place your hope in a man (not in principles, not in a philosophy, and not in each other, but in one man) who is supposed to magically make everything great again. You know that pixie dust isn’t real and you know that a man with no character, no history of conservative principles, nor love of our constitutional system, can never truly make America Great.

Senator Ted Cruz has done everything he promised he would do and it is time for us to make a choice. If we say no to Ted Cruz, no politician will ever again have the courage to fight as hard for us as Ted Cruz has, because they will see and know, that while we say that’s what we want, we’re no better than the politicians – that we say we want a principled conservative, but what we really want is to be entertained. Well, I don’t want to be entertained. I want my country back.

Virginia, I ask you, do what you want to do, and vote for Ted Cruz for President.

Articles like this are all over the Republican blogosphere today and I’m sorry but they’re a complete waste of time at this point. I like Cruz and appreciate the author’s passion for conservatism, but its well past time for all Cruz and Rubio supporters to face the reality of the situation. Trump IS going to be the nominee.

Just go to Real Clear Politics and check the poll numbers and delegate counts for the remaining states. No amount of “get out the vote” efforts will be able to close a 20 point deficit. A brokered convention is a non-starter because it would literally destroy the party. As would an independent run by some establishment lackey (I’m looking at you Romney).

Time to move on, our options are Clinton and Trump. Choose carefully.

You can’t be a Constitutional Conservative if you ARE NOT ELIGIBLE. Go run for PM of Canada.

The irony, Constitutional Conservative ignores part of the Constitution which expressly forbids him from being president, ha!

Of course, he is eligible, and continuing to state the falsehood that he isn’t just makes you look goofy.

Then let him show his naturalization papers. He has them, but that does NOT make him Natural born.