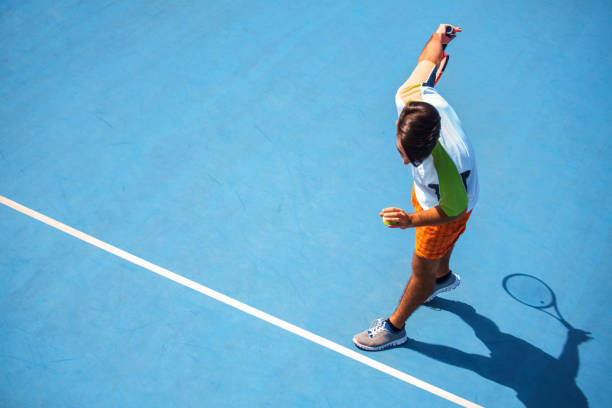 “No one owns tennis. It owns you.”

Too far over half a century ago, when I first picked up a tennis racquet in dusty far-west Texas, football or maybe baseball were the games real men played. But I knew in the swoosh of a swing, as my first tennis ball went over the net, that I’d found my calling. My game.

I can still remember the elementary school football coach fitting me with all the accouterments for combat, then sending me to the front lines of team try-outs. I was a late developer, small by class standards, and one of my mates ran over me like a tin can in the street.

The spirit was willing, but the shoulder pads did nothing to blunt the carnage.

I did finally take up track and high-jumping, but always lingering in the back of my mind was the crack of a tennis ball sailing across a net. It was a sport that was all in my control, not dependent on a teammate or someone else’s ability.

Alas, tennis courts were scarce, and companions more so. But I never stopped. The flight of a ball I struck was like a chorus of invitation for more, never less.

One issue, of course, was that all those years ago, tennis was still seen as a game for the upper-class, if you will, the elites – highbrows and such. I was about as lowbrow as you were likely to find.

The courts I could play on were cracked and barren landscapes populated with struggling grass in the corners, burning up in the Texas sun. Nets were what they were. Neglected and weather-worn, or showing the signs of assault from invaders with trikes and bikes and who-knew-what-else. Some nets were even metal, stretched across a forlorn court as the last hope for survival. I played on lost courts under a noisy overpass, hidden behind schools, or the lonely single court on a small public plot.

It didn’t matter. I could hit the ball. That beautiful ball. That glorious white ball.

As youth melted away, school, but mostly cars, girls, and work intervened all too often. But with my wooden Wilson racquet, I hit on courts as I found them, even by myself. In high school, I couldn’t make the schedule for the tennis team because of my work schedules. But, I could use those beautiful six courts and self-taught myself the game’s fundamentals that I found in a library book.

Then I discovered that the elite image of tennis, even in West Texas, was giving way to a populist wave. More and more, I found lowbrows such as myself to play with. We didn’t have professional lessons. And we certainly couldn’t afford fancy tennis outfits. We played in shorts or cut-offs and white tee-shirts, and any tennis shoes we could find.

We didn’t know it, but we were on the leading edge of tennis breaking into popularity with the public and breaking out of its image as a snotty-class sport. My friends and I were the rough around the edges “street players” who simply loved the game. Perhaps we were too loud and not always polite. But we loved tennis from the heart out.

I probably went as far as I could go without professional coaching, but I managed a wicked first serve, was quick, and hit a lethal flat forehand. I became a two-or-three time a week player who marched on and on. I’ve been very blessed over the years to work in environments where I could catch games here and there and on weekends. Most importantly, I married a woman with the patience of Job who understood that playing was not a hobby with me but part of my life. She didn’t play but has always been the side-kick to my love of those now green balls.

My tennis high-point came when I had an invitation to hit balls with one of the greatest Grand Slam champions in history, Roy Emerson (twelve single and sixteen doubles titles). We met at a clay court at a downtown Hilton in Washington, D.C., in the early 1990s. He changed my continental grip to an eastern grip on the spot and showed me why. I’ll never forget the thrill of hitting with one of the all-time tennis greats and feeling the incredible power and crispness of his stoke, even though he was in his 50’s at the time. It was like riding a rocket, and I finally thought that I’d arrived.

Now, when most of my tennis peers have moved on to more genteel doubles, I’m still a singles player, scrounging for games as I did fifty years ago. It doesn’t matter if it’s a broiling afternoon or a winter day. I’m a solid but not a great player, but I can flirt with the 4.0 crowd and walk off the court happy even if I lose.

I played, that’s the thing.

Three knee surgeries and arthritis have slowed me only a step. A shoulder surgery robbed me of my hard flat first serve, but I’ve re-invented a good slice and tough, consistent second serve. But injuries are the small admission to the game that has given me so much.

After all these years, I’ve learned that tennis is a very personal affair. It’s played between your ears, and opponents are spectators to your drama, as you are to theirs. It brings out both the best and the worst of everyone who picks up a racquet and strangely provides life lessons useful in everyday affairs.

No one owns tennis. It owns you.

But when you love this game, you live for that one spectacular ground stoke. Or to crack off a well-placed corner angle and rush the net for a perfect volley. Or to feel and hear that big serve that pops, sending an opponent scurrying to recover. Or to take that exceptional service on the rise with a better return.

They make all the countless times when the game humbles you worth it.