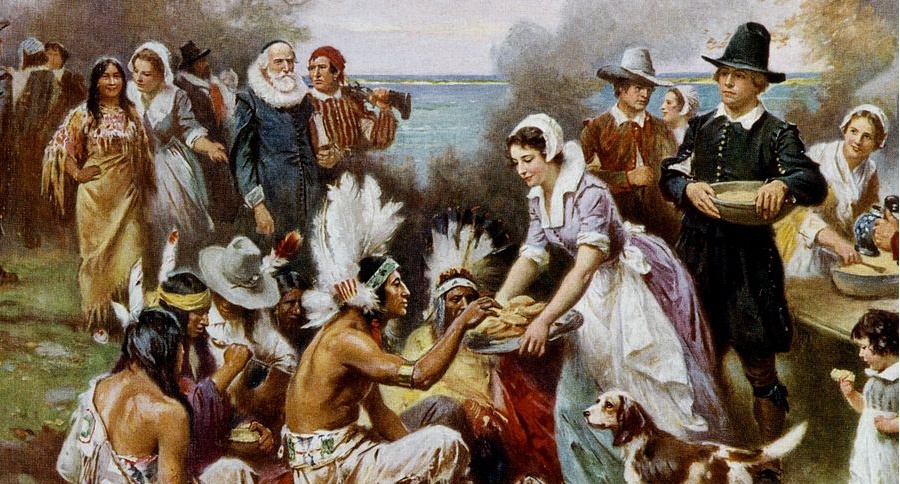 Several years ago we hosted two California colleagues for Thanksgiving dinner. Their work with my division had kept them in DC over the holiday. One man related how his fifth-grade daughter had told of the Pilgrims’ first Thanksgiving Feast in Massachusetts, as she had learned it in school: ‘The Pilgrims were thankful to the Indians for helping them.’

My colleague – not a particularly religious man – was shocked at his child’s misunderstanding of this important American tradition. He told her how the Pilgrims were deeply religious people who came to America so they could practice their faith, and that they held that first Thanksgiving feast to thank God for the bountiful harvest and for His blessings in the new land. The Indians were invited to the feast as a gesture of friendship. My colleague showed his daughter how our celebration of Thanksgiving Day continues that tradition to this day. It is unique among the nations of the world.

I thought of that incident when I heard that state education officials in Maryland (our former home state) had issued an edict about observing Thanksgiving in the public schools. Teachers may now teach students that they can be “thankful” to almost anyone or anything. This includes: families, parents, teachers, politicians, civil rights leaders, Allah, Buddha, the Great Pumpkin, the Great Spirit, strong spirits, team-spirit, spirits of camphor, the Indians (Cleveland, etc.), Manny, Moe, Jack, Sacco, Vanzetti, Harpo, Groucho, or Chico. But not “God”! (Anybody but God.) 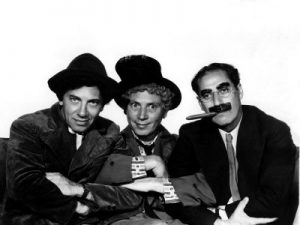 These days, everyone talks about “values.” The Maryland Education pooh-bahs were summarizing Maryland’s values as: (1) God – No! (2) Anybody else – OK! It’s not clear where they got this authority, but you have to admire their style. (The Pilgrims would be proud.)

In 1863 Abraham Lincoln made his famous Proclamation of Thanksgiving – acknowledging the “…gracious gifts of the Most High God…” and designating the last Thursday in November as a national day to thank God for his blessings. Maryland folks didn’t like Mr. Lincoln very much when he was around. Maybe they’re getting back at him by dissing Thanksgiving. Lord Baltimore and the other Catholics who founded Maryland must be spinning in their graves.

Not to be too tough on poor old Maryland, things are not much different in the other blue states, or even the red ones. The “Gott – nein!” movement has been goose-stepping ahead smartly, nation-wide. Maryland merely clarified things for the rest of us. Try to think of when your kids last brought home anything from school about Thanksgiving, the Pilgrims, etc. (I’ll bet you can’t recall a time.) Halloween now gets the major treatment at school. It’s not entirely harmless in a spiritual sense, but it’s safer for teachers and administrators. There’s no risk that “God” might accidentally be mentioned by some incautious student or teacher and cause a lawsuit.

The same lobotomy has been performed on Christmas. In schools, in the public square, in the shopping mall, God is verboten! Christmas has become a caricature of itself. It is now entirely commercial – the make-or-break season of the fiscal year for most retail businesses. The raucous, gaudy, commercial hysteria that drives our economy for the last six weeks of every calendar year is no longer connected to the Nativity, the Christ Child, Mary, Joseph, the Shepherds, Wise Men, angels, etc.

As a child, circa 1950, I gazed on the colored lights and heard Christmas music wafting out into the night in the center square of our Pennsylvania city. The Nativity scene was displayed in store windows. We sang carols in school. “Merry Christmas” rang out between teachers, students, customers, clerks, tradesmen, and bus-drivers. The city was ablaze with light and good cheer. Christmas was truly in the air. Even non-believers enjoyed the good will of Christmas, thus implicitly affirming the power of the Gospel that it symbolized.

Today, the lights are still there. But the carols, the Nativity, and the shouts of “Merry Christmas” are muted or entirely missing. In their place are silly ditties about Santa Claus, reindeer, snowmen and elves. Greetings are now the neutral “Happy Holidays.” Some schools now observe a new non-religious seasonal observance called Kwanza – a holiday invented in 1965 so African-Americans could have an alternative to the “white man’s Christmas.” (What a special idea.)

In our schools, all this is celebrated as “diversity.” But God’s name may not be spoken. Whatever “The Holidays” are about, school children’s ears are considered too tender to hear that Christmas, a bedrock religious observance of our nation, is not really about Santa or reindeer or elves, but about Jesus Christ – Emmanuel, God with us, the Word made flesh. Our children may not learn that God’s supreme gift to the world – His own Son – is the model for all Christmas gift-giving. Foreign visitors to our schools and malls would have no idea that Christmas meant anything more religious than hoping Rudolph’s red nose would guide Santa’s reindeer on Christmas Eve. 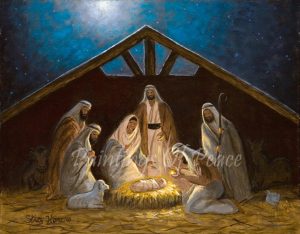 The anti-God spearhead has penetrated well beyond holidays. In 2004 the Department of Defense agreed to sever all ties with the Boy Scouts of America to avoid a lawsuit from the ACLU which charged that the DoD’s support of the Scouts amounted to government support of religion. The ACLU called scouting a “religion” because it requires belief in God. Rather than contest the threatened suit, DoD officials agreed to drop all association with the BSA – a mutually productive relationship that goes back decades.

Social commentators consider it only a matter of time until Congressional and military chaplains come under similar court challenge as evidence of government support for religion. Ditto for the inscription “In God we trust” on our currency and coinage. Unless this movement is stopped, it will sweep every last vestige of God from our public weal.

Who is to blame for these outrages? Certainly the ACLU is an identifiable antagonist, but we are the compliant enablers. By allowing our liberties to be chipped away, little by little, over the last 50 years, WE have become the guilty party. Unless we act, we’ll be standing on the sidelines as the anti-God victory parade romps by singing Mordred’s Camelot anthem: “Fie on Goodness!” Secularism will have become the official state religion.

Immediately after the 9/11 attacks, “God Bless America” signs sprang up like kudzu all over the country. Suddenly, God was “in” again. Americans turned back to God because they were afraid. We hoped He had not forgotten us. Now, seventeen years later, the threat has subsided and the God-signs are gone. God’s name can’t be spoken at school, and it’s considered offensive to speak His name in public.

When the Supreme Court ruled a few years ago that the Boy Scouts may exclude openly gay leaders or members, some municipalities refused to accept this ruling. Subsequently they treated the Scouts as though the ruling had not been made. They suffered no consequences for doing this, but they did expose a well-kept secret: namely, that the Supreme Court has no enforcement power beyond the will of the people. There are no Supreme Court cops.

We need to take a lesson from this. Only a new level of civil disobedience can bring things back into balance. Specifically, legislatures and governmental executives must ignore rulings in which courts demand certain actions of them. Had the Massachusetts legislature ignored their state Supreme Court’s 2003 demand that same-sex marriage be legitimized, a national crisis over that issue could have been averted. Separation of powers excused the legislature from acting.

Similarly, the Department of Defense could have ignored the ACLU’s threatened lawsuit over the Boy Scouts. Any court ruling ordering an end to DoD’s association with the Scouts would have lacked force, since the DoD reports to the president. Apart from a breach of criminal law, courts have no authority over the Executive Branch and its agencies.

To see the truth of this, imagine that a judge had ruled that our 1940s war on Japan was illegal, and ordered a halt to all hostilities. FDR could not possibly have obeyed such a ruling. It would have opened the door to endless judicial tinkering with the Executive Branch and totally upset our government’s Constitutional order. Likewise, the courts cannot declare what is and is not a “religion” – unless we let them. This is outside the courts’ purview. But the buck stops with us. We can right things, but we have to want to do it.

If we want God back in our culture, we shall have to contend for Him. No one else will do it for us. We The People will have to be the agents of change – writing our representatives, protesting court decisions, demonstrating, and exercising civil-disobedience, if necessary.

It’s like Dorothy trying to return to Kansas. All along, the power to get there was in the Ruby Slippers. She just needed to know she could use it. Just so, we have the power to rein in the courts. We merely need to use it. In our Republic, The People, not the courts, are supreme. Let’s start acting that way.

Thanks to Whatever was last modified: November 17th, 2018 by Woody Zimmerman