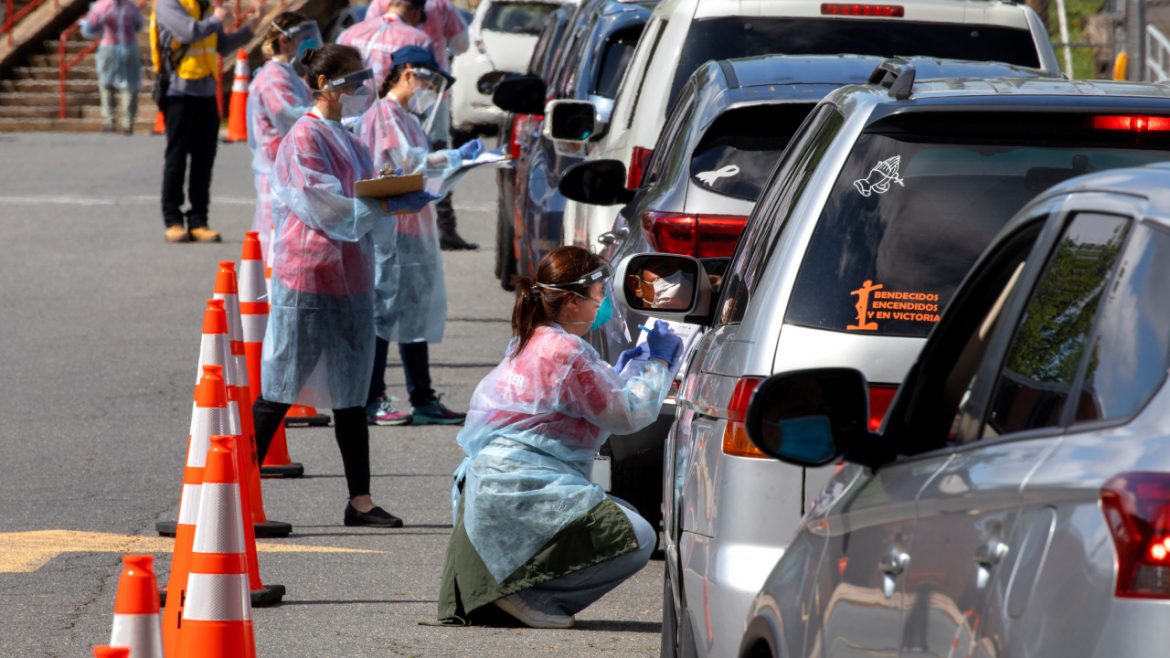 Drive-thru COVID testing in Annandale, VA, in May. Due to CDC's alert about Thanksgiving and COVID, the lines at drive-thru testing sites and pharmacies this past week were worse -- and some sites were not even open. (AP Photo/Jacquelyn Martin)

Rather than not travel, people flocked for testing…and drug stores were overloaded

No better example of how people will avoid government restrictions and regulations can be seen with this Thanksgiving, and the “resistance” of sorts by the American public to travel to see families for turkey and trimmings despite what their governors and the Center for Disease Control and Prevention (CDC)  told them not to do.

The avoidance of CDC guidelines and governors is illustrated by how the population reacted to mandates that people not “gather  indoor in great numbers.”  Rather than canceling their airline bookings and unloading their cars, what the American population did to obviate government regulation was to go out in mass numbers and get tested for COVID  to get “proof” they were negative in order to fulfill that annual tradition, which by the way, may have been spawned in the Virginia, not Massachusetts, colony.

To recall, the agency that minimized this plague back in January and February, led by one of President Trump’s worst appointees, that douche bag Robert Redfield – issued guidelines Nov. 19 which stated, in part:

As cases continue to increase rapidly across the United States, the safest way to celebrate Thanksgiving is to celebrate at home with the people you live with.

Gatherings with family and friends who do not live with you can increase the chances of getting or spreading COVID-19 or the flu.

As a result, many of the nation’s governors – using their absolute powers under “emergency management” and trying to look like they are “following the science”– issued draconian rules, which in some states like New York, threatened to send in cops to homes where there were more than 2 or 3 cars in the driveway. The media went on high alert to warn people not to have Thanksgiving with lots of “strangers.”

Even the leftist governor of Oregon urged people to fink on neighbors who had large gatherings.   This is “1984” all over again.  But various police forces announce they would not enforce these laws, as in New York state.

But the public at large responded as many do when government issues heavy-handed edicts – they ignored their Lord Governors or worked around them.

First, people did not cancel their airline bookings. But the second lesson here is how the media reported it.  Do a Google search  “air travel rates thanksgiving “ and you’ll see headlines all over the map on whether air travel plans were canceled, or not. But millions did travel.

Third, and most important, millions flocked to get tested for COVID.

I traveled to Northern Virginia for Thanksgiving, as did my daughter and sister.  So, we went for tests, neither of us got tested due to the fact bookings at drive-thru drug stores were booked.

I arranged for a quick test at a Walgreens in Hampton on Sunday, Nov. 22.  I got there, and the place was closed.  I went online to find other locations.  Nothing available until Tuesday, Nov. 24, at a Walmart in Virginia Beach – and I had to be in line by 7:30 am.!

When I got to the window, the pharmacy assistant said he had no lab order from Quest Diagnostics, which has the testing contract with Walmart. He said I needed to call Quest – which is notorious for lousy customer service – and get out of the line.

So, I did.  The number the pharmacist gave me was not the right one, though I got a live person on the phone quickly.  The Quest person put me into the queue and was waiting 30 minutes!

I am back in line at this point and got out of my car, went to the window to tell the pharmacist this was not working and pleaded if I could get a test.  She said no and folks online started cussing at me.

Back in my car, someone from Quest answered the phone and said I needed to prepay for the COVID test!  When I originally scheduled this one in Virginia Beach, I had NO OPTION TO PAY.  So, here I am trying to register on my cell phone with my big thumbs while the Quest person, who was at a real terminal, refused to help me.

I now registered for an opening at a nearby Walmart, but at 2:15 pm.  Mind you, I am supposed to be on the job at 8:30 am. And had a telecall at 9:30.  But I now got a QOR code.  The Quest person said I could show the code to the pharmacist and see if they would honor it.

But when my car arrived at the window, they told me they did not have a lab order and the QOR code would not help.  The assistant said this was not sufficient and said my reservation was at a different Walmart.  So, I asked them to call the other Walmart to see if I could come over now.

The pharmacist did and they told me – they were not doing testing!

So, after waiting 90 minutes I got no test at all, and even if I did, the results would not be ready by Thanksgiving.  Why Walgreen and Walmart listed testing sites that had no tests was truly awful.

Loudoun County set up free testing in South Riding and Purcellville on Sat. Nov. 21.  The line in South Riding was three hours long.  My son got his results Wednesday, but not his mother nor my sister, who tagged along.  So, what was the point of all of this?

My guess is the clinical labs were so overloaded with nasal swab samples, they could not possibly get results to people before Thanksgiving.

But the entire episode points to the failures of government to handle the crisis through targeted intervention, and the results of disastrous health communication efforts by both the federal and state governments.  It shows how the public will ignore government, even risking consequences.

If the CDC were doing its job, it would rightfully tell the nation – and the world – that these spikes in new cases are not all serious.  Less than 5% result in medication and hospitalization.  Instead, they leave it to Trump and his much-ignored adviser, Scott Atlas, to communicate this while heroes like the media whore Anthony Fauci tell whatever news outlet what it wants to hear for their stories, but always urging more lockdowns.

Whenever this pandemic ends, I sincerely hope Congress will convene a bi-partisan commission that will investigate how the CDC, NIH, FDA and WHO botched the handling of this;  how governors and local health commissioners fomented fear and economic disaster;  how the media and politicians, right and left, used this crisis for ratings and votes and failed to communicate a consistent message about COVID severity.

The future of humanity (and the stock market) now rests on a successful vaccine.

But if anyone wants to learn from this Thanksgiving fiasco, the lesson is – government is not always the solution, but the problem, as Ronald Reagan said.

Thanksgiving COVID restrictions show how people will avoid government regulations when they can was last modified: November 27th, 2020 by Guest Contributor Ken Reid

Bipartisan commission needed to do a look-back on government’s COVID failures and how to prevent future disease disasters – The Bull Elephant March 12, 2021 at 3:14 pm

[…] PREVENT TRAVEL FROM OUTBREAK AREAS IN THE U.S.  – I wonder how better off we would have been if back in March, the feds just locked down New York City, parts of NJ, Detroit, and barred travel to and from those areas, by plane, car, bus , etc.    Instead of making the entire country lock down, just do it in one area.  The public by and large ignored travel advisories, like over Thanksgiving and Christmas   […]