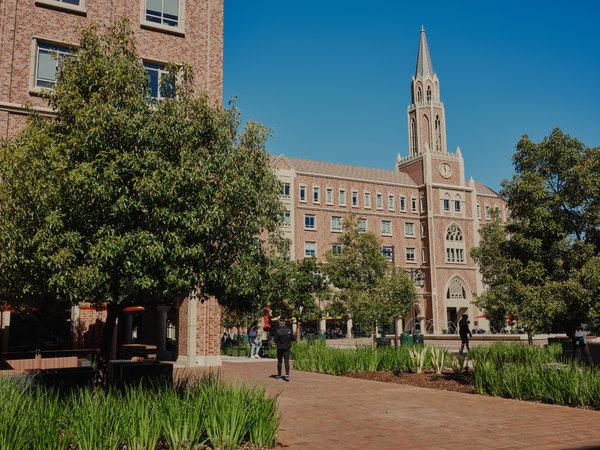 University of Southern California one of the schools involved in the cheating scandal. (Photo credit: Rozette Rago for The New York Times)

The 55 parents arrested in the college admission scandal

Federal prosecutors have arrested 55 parents involved in a wide range of illegal schemes to have their children admitted to elite colleges and universities where theirÂ children would not otherwise qualify.Â  Some parents went so far as to pose their children as athletes when they were not.Â  Others paid people to take the SAT for their child.Â  Some bribed coaches and admissions officials.Â  There may be more arrests.

The Wall Street Journal has listed all of the parents who have been arrested thus far. It’s a very impressve list of rich people.Â  Since many readers do not access to the WSJ those charged are:

Greg AbbottÂ is the founder ofÂ International DispensingÂ Corp.Â , a food and beverage packaging company. He and his wife,Â Marcia Abbott, live in New York City and Aspen, Colo.

Gamal AbdelazizÂ is a former senior executive of a resort and casino operator in Macau. He is a longtime executive of the gaming and hospitality industry, including a stint at Wynn Resorts Development.

Jane BuckinghamÂ of Beverly Hills, Calif., is the chief executive of a boutique marketing company based in Los Angeles.

Gordon CaplanÂ is a private-equity lawyer and co-chairman at Willkie Farr & Gallagher LLP, an international law firm based in New York.

I-Hsin â€œJoeyâ€ Chen, a resident of Newport Beach, Calif. operates a provider of warehousing and related services for the shipping industry. Prosecution documents also spell his name as I-Hsien Chen.

Gregory ColburnÂ is a physician and lives in Palo Alto, Calif., with his wife,Â Amy Colburn.

Robert FlaxmanÂ , a 62-year-old resident of Beverly Hills, Calif., is the founder and CEO of a real-estate development firm in Southern California. Prosecution documents also list him as a resident of Laguna Beach, Calif.

Gregory ColburnÂ is a physician and lives in Palo Alto, Calif., with his wife,Â Amy Colburn.

Robert FlaxmanÂ , a 62-year-old resident of Beverly Hills, Calif., is the founder and CEO of a real-estate development firm in Southern California. Prosecution documents also list him as a resident of Laguna Beach, Calif.

Felicity HuffmanÂ , an actress, is best known for her role in the â€œDesperate Housewivesâ€ television series and the 2005 movie â€œTransamerica.â€ Ms. Huffman is married to actor William H. Macy, who wasnâ€™t named in the case.

Agustin Huneeus Jr.Â is an owner of vineyards in Napa, Calif., and elsewhere.

Bruce and Davina Isackson; Mr. Isackson is president of a real-estate development firm in California.

Michelle JanavsÂ is a former executive of a large food manufacturer formerly owned by members of her family.

Elisabeth KimmelÂ of Las Vegas is the owner and president of a media company.

Marjorie KlapperÂ of Menlo Park, Calif., is a co-owner of a jewelry business.

Lori LoughlinÂ is an actress known for her role on the ABC sitcom â€œFull House.â€ A publicist for the 54-year-old actress declined to comment. Ms. Loughlinâ€™s husband, fashion designerÂ Mossimo Giannulli, was also charged.

Toby MacFarlaneÂ of Del Mar, Calif., is a former senior executive at a title-insurance company.

Bill McGlashanÂ is the founder and managing partner of TPG Growth, the arm of the private-equity firm that invests in fast-growing companies including Airbnb Inc. and Uber Technologies Inc. Mr. McGlashan is also the co-founder of TPGâ€™s Rise Fund, which is focused on socially and environmentally responsible investing. TPG said it placed Mr. McGlashan on indefinite administrative leave, effective immediately.

Marci PalatellaÂ is CEO of a liquor-distribution company in Burlingame, Calif., and owner of a Kentucky distillery. Ms. Palatella is married to Lou Palatella, who played for the San Francisco 49ers in the 1950s.

Peter Jan SartorioÂ is a packaged-food entrepreneur and founder of Elenaâ€™s Foods in the San Francisco area.

Stephen SemprevivoÂ is chief strategy and growth officer at Cydcor, a provider of outsourced sales services, according to his LinkedIn profile. He previously was general manager of Machinima, a once-popular digital content network bought by Warner Bros. andÂ shuttered earlier this year.

David SidooÂ is chief executive of Vancouver-based Advantage Lithium Corp. and East West Petroleum Corp., according the companiesâ€™ websites. A lawyer for Mr. Sidoo said in a statement the charge against his client carries the presumption of innocence. â€œWe look forward to presenting our case in court, and ask that people donâ€™t rush to judgment in the meantime,â€ Richard Schonfeld, the lawyer, said.

Devin SloaneÂ is the founder and CEO of aquaTECTURE, a Los Angeles-based company that invests in water-treatment systems and technology. He has served as a trustee on the board of the Buckley School, a private K-12 school in Los Angeles.

John B. WilsonÂ is the founder and CEO of a private-equity and real-estate development firm in Massachusetts.

Homayoun ZadehÂ who lives in Calabasas, Calif., is an associate professor of dentistry.

Robert ZangrilloÂ of Miami, Fla., is the founder and CEO of a private investment firm.

More on the cheating scandals here and here.Â

The 55 parents arrested in the college admission scandal was last modified: March 14th, 2019 by Jeanine Martin