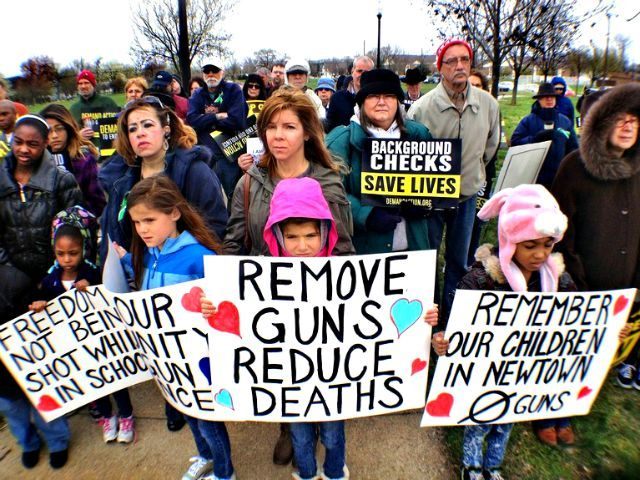 (Second in a series)

Today’s band of leftist Democrat candidates for the presidency are an interesting study in contradictions regarding crime and law enforcement. On one hand, most of them are preaching that our main problem is guns: there are too many guns; too many people have guns; and too many guns are being manufactured and sold. If there were fewer guns, we would have less crime. Indeed, if guns were eliminated entirely, there would be no crime at all. Every time a sensational crime is committed with a firearm, Democrats launch a noisy new crusade for stricter laws on who can buy or own a gun, and which types of guns should be legal (or illegal).

On the other hand, another oft-proclaimed Democratic article of faith is that violent, racist cops are at the heart of our crime-problem. Whenever a white cop shoots an unarmed black man, media race-hustlers loudly proclaim that these shootings are happening more and more frequently. In reality, though, such incidents don’t happen very often. Any death is a tragedy, of course, but incidents in which policemen use deadly force without justification are very rare, and their frequency is decreasing. In 2017, police killed 19 unarmed blacks – down from 36 in 2015. (Statistics are not available on how many of those shootings were ruled “unjustified.”) Nevertheless, politicians are out there trying to scare minorities by branding cops as racists who are unnecessarily brutal in discharging their duties.

Recently a video-clip was aired which showed police officers being doused with water in two separate New York City neighborhoods. The officers did not respond when (mostly black) hooligans repeatedly showered them with buckets of water, as they tried to reach their patrol cars. In one clip, bystanders and participants are heard laughing and cheering as the cops are repeatedly doused. Obviously they were ordered not to respond to what would have been called “disorderly conduct” and “assault on a police officer” in an earlier time. The videos were shocking and extremely depressing. Decent citizens should be appalled at this treatment of peace officers, and alarmed at the precedent which it sets.

You don’t have to be a behavioral psychologist to know that morale in the NYPD ranks must be below basement-level under a policy which countenances such disrespect. (Would the mayor or city council-people be OK with being doused with water outside their offices?) To date, NYPD officials have issued no official response regarding these incidents. Are they waiting until a cop gets injured by a brick thrown at his head? Or until someone gets shot?

So how does all this add up? Politicians want more laws that will disarm mostly law-abiding citizens. But after three or four drinks in the wee hours, even the most dedicated gun-control zealot will probably admit that gun-laws don’t affect the real bad guys because they pay no attention to laws. Thus, gun-control laws mainly disarm law-abiding citizens. As one of my old teachers liked to ask: “Who will be the better for that?”

Leftists who appear zealous for the public’s safety, when it comes to guns, are lining up against police, prosecutors and judges who enforce laws duly enacted by local, state and federal legislatures. Dems declaim about racial imbalance in our prisons – demanding release of felons who have committed so-called “victimless crimes.” The same people also oppose the death penalty with a holy fervor which completely overlooks the wretched deed that cruelly cut off the life of an innocent person (or persons). Any visitor from Mars would readily conclude that leftists want as many criminals as possible living among us, with their activities uncontrolled and their vicious conduct excused on “compassionate” grounds.

This means that activists on the left side of our political divide want (at the same time):

Sounds like a perfect expression of the title of this series, doesn’t it? A political strategy designed by morons. But why?  Where’s the sense in disarming the law-abiding public, de-powering the cops, and letting the criminals loose? It seems like complete nonsense.

Except that it isn’t. It’s actually a time-tested strategy traceable to Marx, Engels, Lenin, and Hitler – those noble social philosophers and ruthless activists who dreamed up the idyllic socialist-communist state and showed us how to establish it. Summarizing Marx’s Communist Manifesto1 or Saul Alinsky’s Rules for Radicals2 is impossible in this limited space. Suffice it to say that their principles frame the plan by which American leftists – i.e., the Democratic Party – hope to “fundamentally transform” the USA (as Barack Obama so lovingly put it).

First among leftists’ operating principles is the “de-stabilization” of society. This is how a disarmed public, crippled law-enforcement and more criminals are related. These situations work in concert to make our society more chaotic. Statistics consistently show that when citizens are disarmed, crime increases. Conversely, when ordinary citizens can be armed, crime diminishes. Gun-control advocates furiously deny this, but the data are unmistakable. Most criminals – even those who use firearms – want easy marks, not the OK Corral. Their “games” of choice – e.g., robbery, assault, kidnapping, murder – aren’t nearly as much fun when you don’t know if grandma is packin’ a piece.

Less effective policing and prosecution also guarantee more crime and a disrupted society. Ditto for more lawbreakers living amongst us. You don’t need an advanced degree in law or criminal justice to see this. A child could tell you that you’ll get more crime (and less order) when you let the crooks, pushers and sex-traffickers walk free.

Socialists who want to take control of a country start by creating a societal environment so chaotic and disorderly that fearful citizens will surrender their rights and freedoms in exchange for promises to restore order. To achieve this condition, Alinsky’s Rule #8 is particularly apropos:

“Keep the pressure on. Never give up. Keep trying new things to keep the opposition off balance. As the opposition masters one approach, hit them from the flank with something new. Attack, attack, attack from all sides, never giving the reeling organization a chance to rest, regroup, recover and re-strategize.”

Scholars say that the Chinese character for “crisis” contains the character for “opportunity.” That’s worth thinking about during this frenetic season when so many politicians are declaring, “The end is near! Only we can save you!” Some of them are hoping that the “end” for us will be a glorious “new beginning” for them – even if they’re not Chinese.

The rest of us need to be aware that the socialist express is on its way. If we want to stop it and hold onto the country, we’ll have to undo the law-enforcement madhouse that leftists have put in place. Enough is enough.