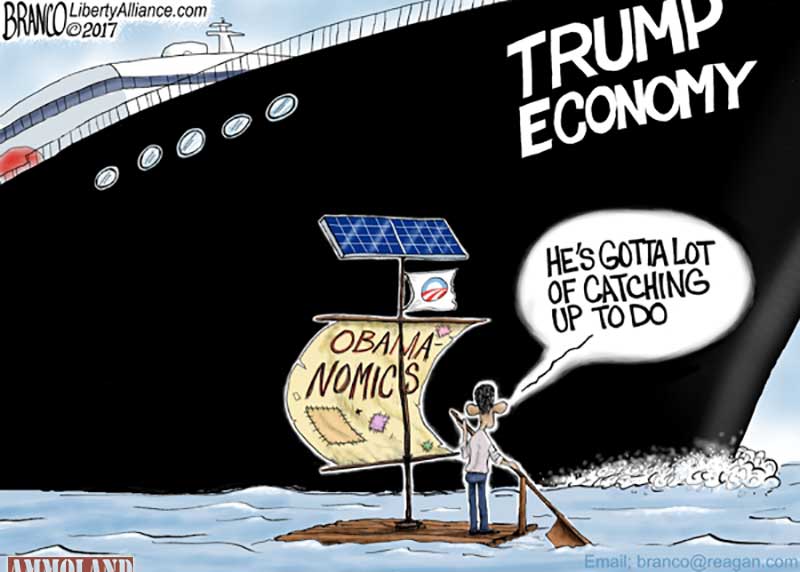 (Part IV of a series)

We’re currently in the midst of a booming national economy featuring the best employment and wage numbers for minorities in our history. But with all this going on, leaders of the minority “community” are appearing on TV and at political rallies, denouncing Mr. Trump’s “racism,” demanding his impeachment, and shilling for Democratic candidates to restore “normalcy.”

The candidates those leaders favor make no bones about their plans to “correct” the Trump economy, while claiming that they will usher in a new golden age of peace, prosperity and free everything – all paid for by the (filthy) rich. And their minority-leadership allies are going right along with the whole crazy business. A child could see that it’s completely contrary to the interests of minorities who want to advance, provide for their families, and share the American dream of prosperity and self-sufficiency.

Why would any political leaders so obviously work against the economic interests of their constituencies? Don’t they want the people they represent to succeed? Unfortunately, the short answer to the second question is “Not really.” I’ll probably get hell for saying this, but I stand by my assessment. And I’ll answer the “why” question in the following paragraphs.

Modern Democrats have made a great effort to pretend that their party has always been the champion and caretaker of minorities. Of course, this is untrue. In fact, Democrats had a long history – starting early in the 19th century and lasting into the 1960s – of institutional racism which did much to deny minority citizens access to the economic and cultural mainstream of American society.

In the mid-19th century, eleven southern states, governed by Democrats, rebelled and attempted to form a separate country that would have enshrined black slavery as an untouchable societal norm. The disastrous war produced by that rebellion cost the nation some 600,000 deaths, upwards of a million injuries, and the economic ruin of large parts of the American South.

Having defeated the rebellious Confederacy by force of arms, the nation abolished slavery and gradually welcomed the rebellious states back into the union. Although slavery could no longer be practiced, those southern states – still governed primarily by Democrats – instituted a segregated society which disadvantaged dark-skinned people under force of law. So-called Jim Crow governance in the South lasted well into the 20th century.

During the 1950s, as the political winds began to blow against segregation and the biased, “separate but equal” doctrine of education, some Democrats realized that they could build political futures in the new climate by assuming the roles of protectors and providers for needy minorities. One of those Democrats was Senator John Kennedy, who in October 1960 made a supportive phone call to Coretta Scott King, while her husband, The Rev. Martin Luther King, Jr., languished in a Georgia jail. Many historians believe the much-publicized call generated enough sympathy among black voters to tip the election his way

Whether or not that phone-call won the election for JFK, there is no doubt that the movement of significant numbers of blacks into the camp of their old political nemesis made them an influential Democratic bloc, as they are to the present day. Democrats have also done their best to keep illegal immigrants and asylum-seekers thronging across our southern border, in anticipation of these needy people becoming future voters for their party’s candidates. Democrats’ assiduous courting of minority-voters has produced a dependable power-base which often spells the difference between electoral success and failure for their party.

Initially, Democrats’ cultivation of their new minority-bloc went swimmingly. With Lyndon Johnson at the helm, and a solid Democratic Congress supplying the legislative oomph, the Great Society was launched. It featured a heavy emphasis on welfare payments and food stamps for poor families. (“Happy Days” were here again.) Reputedly, LBJ summed up his party’s new strategy by crudely remarking: I’ll have those n*****s voting Democrat for the next 200 years…” (Modern Democrats deny that he ever said it, but it’s entirely believable that an old-time racist Democrat from the Deep South said exactly that.)

Welfare thus became the centerpiece of Democrats’ provider-strategy for their new minority-bloc. It furnished two major advantages for the party. First, it allowed Democrats to pose as compassionate providers of sustenance for needy minorities – especially, for “the children.” This burnished Democrats’ long tradition as the natural home of social liberals who got children out of the factories and protected older workers through unions. It was a glorious new day for Democrats, with no visible downside.

There was a downside, though – especially for the recipients of this largess. Uncritical provision of welfare made many minority-families dependent on government and hurt their ability to become self-sufficient. Indeed, some government welfare-programs promoted dissolution of minority families by denying benefits to any family in which a husband was present. Democrats’ “gift” of welfare to many minority families was “poisoned bread” which kept a large part of that political bloc permanently poor and disadvantaged.

This very result actually became the second advantage for the Democratic Party. Keeping minorities poor and unable to rise out of poverty ensured that an underclass would exist indefinitely as a reliable base for the party. Welfare thus makes Democrats look kind and compassionate, while it keeps their essential minority-constituency poor and needy.

The Dirty Secret and the Shocking Truth

Obviously, then, any political movement or economic program which helps minorities to better themselves, obtain gainful employment, and move out of poverty must be denounced and opposed by every politician whose power depends on a permanent underclass. This explains why Democrats always oppose educational vouchers that could help poor minority children to obtain good educations. Well-educated, self-sufficient minorities taking control of their own futures wouldn’t need Democrats’ “helping hand.” Ditto for minorities working and prospering in a booming Republican economy. Anything that helps poor minorities to achieve independence is a threat to Democrats’ power-base, and must be stopped. This is the (really) dirty secret of Democrats’ welfare/compassion strategy of the last half-century.

Unluckily for unscrupulous politicians of this ilk, that “secret” is becoming less secret by the day. With more minorities employed and earning good wages than at any time in history, the way is opened for millions to escape from the prison of welfare-dependence and have a real shot at the American Dream of self-sufficiency and decent, orderly living. With a new can-do message booming out of the White House, businesses are welcoming willing workers of any race or ethnicity with open arms.

The shocking truth, which Democrats and their fellow-traveling media-pals are desperately trying to hide, is that Mr. Trump and his gang of new Republicans are minorities’ true friends. Today’s wide-open economy is not for whites only. It is for all Americans who want to work and live productive lives in the normal culture. Like many of my colleagues during my own business-career, Mr. Trump doesn’t care what color people are, or where they came from, as long as they can do the job at hand.

To distract their constituents from realizing this inconvenient truth, Democrats have denounced President Trump as a racist, a Nazi, a xenophobe, a hater, a liar, and a really nasty person. He is their political Great Satan. They do everything they can to block his attempts to make the country and its people more prosperous, while singing the siren song of free everything, which they promise to provide if they are elected.

‘Pay no attention to the numbers on that paycheck!’ they tell their minority-constituency. ‘We’ll take care of you, and we’ll make sure those hateful white people pay for everything.’

The real racists – as they have always been – are Democrats, who hope that minority voters will be too stupid to recognize the cynical, oppressive strategy which their “protectors” have employed for the last half-century. My hope (and expectation) is that Democrats will be wrong about minorities’ intelligence, too, as they have been wrong about so many things.

The Founders’ vision for America was cultivation of a free people, not distribution of free stuff. Minorities need to stop listening to “leaders” who want to keep them “in chains” (in Joe Biden’s charming parlance.) It’s a bright new day. Time to leave the plantation and live the way free people are meant to live.