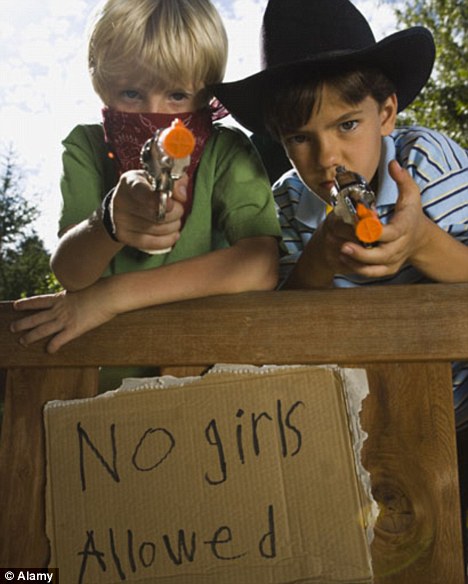 Learning independence? Or Criminals in Training?

The Aging of Childhood (Part II)

In “The Aging of Childhood (Part I),” [1] we saw how childhood is being prolonged by parents, teachers, coaches and others whose well-meaning interference keeps children from learning to deal productively with failure, disappointment and inconvenience. Here we’ll examine how childhood immaturity is extended when children don’t develop skills in independent play, learning, finishing tasks, and other aspects of educational “form.”

Mine was a privileged childhood. Readers might imagine that I had all the material things I wanted and attended the best schools, etc. Hardly that. My parents were nobody in particular, and we had very little. When I was a boy, Pop was a young mechanic still learning his craft, after serving in the war. We got by, but our style of living would be considered “poor” by today’s standards. Pop drove a 12-year-old car; my parents, my four siblings, two grandparents and I lived in a 1912 row-house that had one bathroom.

It was where we lived that made my childhood special – at first, during the 1940s, in an old suburb of Allentown, PA, dating from early in the century. Plots of land were big enough for gardens; some properties were actually small farms. (Indeed, the place was called Farmington.) Its communication with the city was a trolley-line with a stop close by. What made it special for a boy was space to run and play for hours without bothering anyone. Someone owned all those vacant fields and lots, but they didn’t mind that we were hunting buffalo and fighting the Iroquois with bows and arrows. My mother’s rule was that I must come home for supper when the sun touched the top of certain distant trees. Otherwise, I was on my own. I recall coming in with my homemade bow and arrows, ruddy with cold, and sitting down to my mother’s steaming supper after being outside all day. (We had fought off the Iroquois again, but no buffalo.)

My parents had little idea where I was. No adults intervened in our play. Older kids rarely noticed us. No deviants lurked about. Neighbors knew us, but we were entirely on our own – organizing our games, running, arguing, yelling, and tussling. On and on went the war against the dreaded Iroquois. (We were Indians, too, but it was never clear which tribe.)

Later, when we moved to a larger house in the city’s center, my new playmates and I fought raging cap-pistol battles in the back-streets and alleys. At age eight I planned to become a gunfighter, but when we started playing ball my career plans switched. (How times have changed – today, I could have been both ballplayer and gunman.) Contrary to popular belief about kids playing with toy guns, not one of us junior “desperadoes” became criminals.

Independent play was at the center of my childhood. I was in the boy scouts and the junior choir, but these were exceptions. Most of my activities were completely unsupervised by my parents or any other adults. At age six, I could ride the trolley car into town to attend a Saturday church activity. Afterward, I would ride the trolley farther downtown, walk to my father’s garage, and wait for him to finish his work-day. From age nine, I biked all over the city to swim and play ball. My parents had no qualms about my complete safety or trustworthiness in these things.

My buddies and I spent uncountable hours playing games that we organized and “officiated” ourselves, with no adult intervention. We learned the skills of the various sports, as well as armed conflict, argument, compromise, defiance, resistance, justice, and semi-reasoned consensus. None of us grew up always having his way. Sometimes we resisted and fought bullies. (No one had an actual weapon.) We won and we lost (sometimes ignominiously) both games and scraps, but no adult evened things out or soothed hurt feelings.

I carry a cherished memory of a muddy football game when I was 12. Several players on our team left at various points in the game, but the other side churlishly refused to rebalance the teams. Down to just two of us, my buddy and I refused to yield. With gritty runs and fierce tackles we held off our opponents until they lost interest in continuing. The two of us walked home, battered and muddy, in a kind of comradeship-in-arms that I have never forgotten. Had adults been in charge, that experience could never have occurred.

But times have changed. Parents perceive that children are far less safe than during my time or even my children’s time, and it is difficult to dispute that perception. A few years ago a missing boy was found in Missouri, along with a second boy who had been missing four years. Both were evidently kidnapped by the same man – a convicted sex-offender. Reports delicately omitted any mention of sexual abuse, but it almost certainly occurred. Abuse and even murder of children are reported regularly in the news.

Few modern parents would dream of permitting the kind of independence I had. Indeed, they might be accused of neglect by child-services, if they did. Consequently, most children’s activities are organized and supervised by adults. Soccer moms ferry kids to team practices, school events, and play-sessions at the homes of selected friends. Activities are carefully screened for sensitivity to a child’s feelings and ego. It’s understandable, but it certainly works against development of independence in children.

Learning is another area where lack of independence hampers the maturing of children. One often hears educators scold parents for spoiling kids’ education by not helping them enough with their homework. This seems odd to me, as beyond age eight I cannot recall my parents ever helping me with my homework, asking if I had any, or checking if I had done it. I spent many hours doing homework, but I knew it was my responsibility. From fourth grade onward, I always completed assignments entirely on my own.

No doubt I was a self-motivated student. Not every child is. But helping a child with homework beyond the earliest grades – a nightly regimen for millions of parents – is like a crutch that keeps a child from walking the road of independent learning on his own.

How many parents have heard these dreaded words at 9 PM on a Sunday night? – “Mom! I forgot all about my term paper! It’s due tomorrow, and I don’t know what to do…” Many parents will spend half the night doing research on the Internet so the child can hand in something that isn’t his work. To the parent it is unthinkable that the child should receive a poor grade which might affect his whole education – even his vocational future. Better to let him receive a false grade now, and help him pull himself together later. 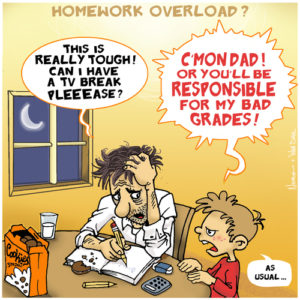 Unfortunately, in many cases, “later” never comes. Unless the parent eschews the crutch-role, the child might not develop the ability to learn independently. This really will affect his future. He might cruise through elementary school, middle school and even high school with good grades, but they are artificial. On his own at college, without his “crutch,” he will fail to note assignments, hand work in late (or not at all), forget to record dates and expected content of exams. He won’t know how to study and organize material. When he does poorly, or flunks out, his parents will be shocked. They will think poor teaching is to blame. Many will never realize that their son (or daughter) didn’t develop strong educational “legs” because of the crutch of their own making. Millions of children never grow out of the childishness of “Mom, I can’t do my homework…”

Readers who think I am advocating a sink-or-swim approach to educating children are missing the point. Everything within reasonable bounds. A child in grades K-3 needs help from parents so he can learn how to take responsibility for his schoolwork. Gradually he gets weaned from parental help until he is working independently – preferably by the fourth grade. Coincidentally (or is it?), experts say student performance declines substantially in our schools from grades four through eight. You can’t “run” if you’re still using a crutch.

Like many things, learning is both form and substance. The facts, concepts and algorithms of a discipline are the “substance.” The “form” is the mechanics of learning – i.e., how to show up, pay attention, take notes, organize material, weave concepts and facts together, and complete assignments on time and in good order.

With some subjects, form is actually the objective, even though specific subject matter is presented. Plane geometry is like that. One learns all about lines, angles, and polygons, but the true aim is teaching the student how to prove new truth by logically applying axioms and previously proven theorems. In adult life, one rarely needs to know: “if two parallel lines are cut by a transversal, the alternate interior angles are equal.” But logical reasoning and proof are skills of formidable lifelong value. Their application enables the discovery of new truth in many fields of study. Some senior educators want to scrap the “proof-based teaching” of geometry because it “alienates” students. Either these radicals don’t understand geometry’s true purpose, or they think it is too hard for modern students. If they get their way, they will cripple the educational future of a generation.

Teaching students how to finish assigned tasks on time is another important part of education’s “form.” Few aspects of schooling transfer so directly to the workplace, in particular, and adult life, in general. In some ways, learning to complete tasks promptly is more important than brilliance. A brilliant result can sometimes be completely useless if it is produced late.

When a teacher moves a deadline back, or lessens consequences for tardiness because some have not finished an assignment on time, the class loses an important aspect of their education. (Those who finished on time learn the perverse lesson that their responsible effort was wasted.) The same goes for a parent who intervenes and buys a child more time to complete a late project. Removing penalties for lateness is as damaging to learning as misinformation is to truth.

Obviously this isn’t an exhaustive treatise, but I want to mention one other aspect of “form.” I learned ninth-grade algebra from Miss Raber at Central Junior high School. A fuss-budget as ever was, Miss Raber was a stickler for form in solving problems. She insisted that the starting facts (usually equations) of the problem be written with = signs exactly aligned, one below another. As the solution progressed, the primary equation had to be restated completely on each line, again with = signs aligned, until the solution was reached. You could lose points for improper form, even if you got the right answer. It sounds silly, but Miss Raber (God bless her!) knew that orderliness of thought and clarity of presentation are valuable skills. I cannot estimate how many times I thought of her emphasis on them in my long technical career.

In subsequent articles we’ll look at additional ways in which childhood is stretched out so young people fail to gain maturity in important aspects of adult life.

[1] “The Aging of Childhood (Part I) – http://thebullelephant.com/the-aging-of-childhood-part-i/ 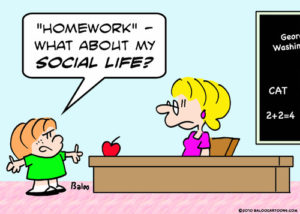 Please run for something, Congress would be nice.