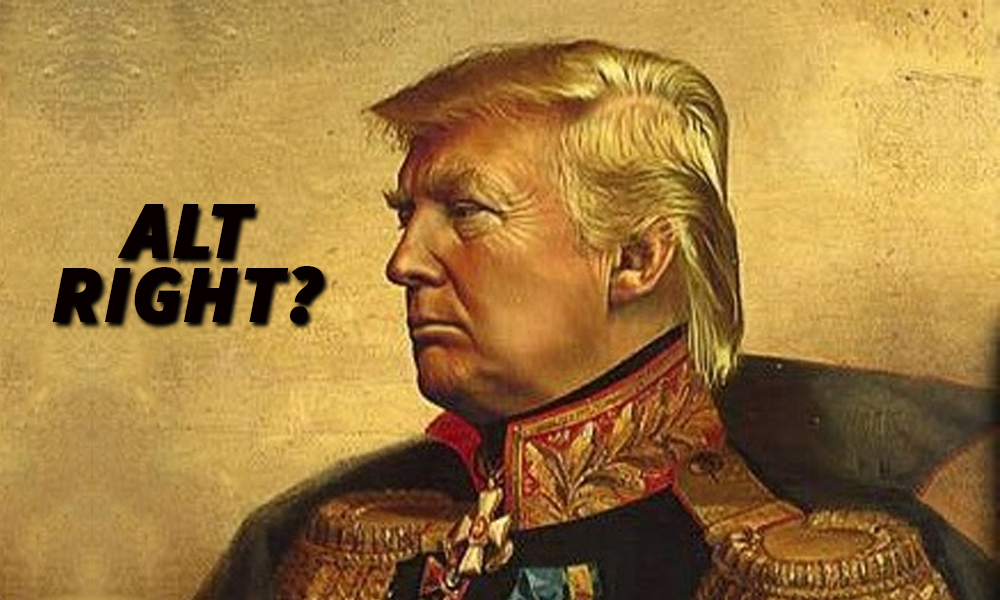 The Alt-Right Does Not Exist

As an active member of the conservative movement, I am familiar with all its wares. There is no such thing as the Alternative Right.

After the Republican-led Civil Rights Act of 1964 overcame a fierce filibuster by Democrat Senators Robert Byrd (WV) and Strom Thurmond (SC), and was signed by Democrat President Lyndon Johnson, many racists in the Democrat Party abandoned the Democrats, taking themselves and many of their constituents over to the Republican Party and fundamentally reshaping the party politics of The South. These new Democrats, like Bill Kristol and Charles Krauthammer, were referred to as “Neo-Conservatives.”  Despite Congressional Republicans overwhelming 80% support for civil rights legislation, these ex-Democrats (these Neo-Conservatives), invaded the Republican Party, causing systemic reversals away from the conservatism of Coolidge, Eisenhower, and Goldwater.

In the 1970s and 1980s, the Democrat Party moved ideologically leftward, leaving an entire wing of the Democrat Party known as Reagan Democrats. Many of these so-called “Reagan Democrats” were anti-immigrant, nativist, and nationalist, cautioning and voting against the bi-partisan Simpson–Mazzoli Bill which Reagan eventually signed. The vast majority of these Reagan, or Blue Dog, Democrats lost primary elections to more liberal Democrats between the end of Reagan’s term and the 2010 Affordable Care Act. Their constituents were effectively left without representation until the McCain/Obama election of 2008.

McCain, a moderate Republican known for making deals with the left, was too unpopular with his base to win a general election. I predicted that Senator McCain would be forced to choose either South Carolina Congressman Mark Sanford or Alaska Governor Sarah Palin, two “conservative” Republicans puzzlingly popular with both Democrats and Republicans in their States at the time.  McCain ended up choosing Alaska Governor Sarah Palin, who brought with her a strongly defensive, if not aggressive, antipathy toward illegal immigration in the United States. Over Senator McCain’s objections, Governor and Vice-Presidential Nominee Sarah Palin pursued the issue of illegal immigration throughout the 2008 campaign.

Blue Dog Democrats, having laid dormant for years, were swept up in the 2007/2008 TEA Party movement established in opposition to higher taxes, higher spending, and higher debt, as well as Palin’s antipathy toward a growing and unaddressed illegal immigrant population in the United States. Obama’s victory would only serve to further sever the ties between Blue Dog Democrats and the Democrat Party. Not only did then-Senator Obama defeat Senator John McCain, but the Democrats took over both the House of Representatives and the United States Senate. The result was a series of ridiculously expensive pieces of legislation, culminating in the Patient Protection and Affordable Care Act of 2010.

Roped in to supporting the first African-American President’s signature legislation, Blue Dog Democrats, under pressure from Nancy Pelosi’s Blue Dog WHIP, Congressman Mike McIntyre (and my North Carolina Congressman at the time), fell on their swords before the American People. The vast majority of them were voted out of office in November of 2010. Congressman McIntyre survived the TEA Party groundswell election, after lying to his constituents about his role in securing the Affordable Care Act, defeating Conservative TEA Party candidate and combat veteran Ilario Pantano, whom my wife and I were proud to support.

With no conservative Blue Dog or Reagan Democrats left in Congress by 2012, conservative Democrats disappeared from politics. Note President Obama’s declining numbers in 2014. Democrats lost their largely white, elderly, male vote in 2014, a demographic which would lay dormant until a certain conservative, nationalist, Manhattan ex-Democrat ran for the Republican Party’s nomination for President in the early summer of 2015. Republicans were astonished by the overwhelming numbers they saw showing up at the polls for primaries previously considered irrelevant considering that the son of one President and the brother of another, one conservative Governor of the great State of Florida, Jeb Bush, had raised over 100 million dollars before the Republican Primary even began.

Ted Cruz, the true Conservative Junior Senator from the great State of Texas, was expected to be the conservative heir apparent to challenge Governor Jeb Bush for the Republican nomination. However, the rise of the old Blue Dog Democrats and their bizarre division with their then pro-interventionist brethren, upset the conservative v. establishment divide in the Republican Party. Unexpected numbers of previously unregistered Republicans began showing up at the polls to vote for Donald Trump and his anti-Mexican, anti-Chinese, and anti-free trade agenda.

While Democrats point the finger at “the extreme right-wing” of the Republican Party for the rise of Donald Trump and the “Alt-Right,” who they are really pointing the finger at are Democrat defectors denigrated and expelled from the Democrat Party since the late 70s and early 80s. Moderate Republicans, who, having pursued these “independents” for years, were horrified when a Republican candidate actually brought them into the fold. Donald Trump, while running off ideological conservatives of every stripe, secured for the Republican Party the Blue Dog and the old Strom Thurmond Democrats, as well as a plethora of angry conservative factions, long bereft of favor and exhausted by losing, along side his campaign.

Unfortunately, this conglomeration of Democrat and Republican factions forming the Alternative Right, is not the least bit conservative. Worse, having awoken their passions, Republican Nominee Donald Trump is now associated with the Alt-Right and all of their flaws and quibbles.

The “Alt-Right” is a concoction of nativist, racist, and statist motivations seeking to use Donald Trump for their own liberal agendas. These foibles are not the only group of people looking to Donald Trump for representation. Republicans, the nation over, are looking to Trump to secure free trade, fair policies by the Federal Reserve, fair decisions by the Supreme Court, and the thoughtful administration of the executive branch of the federal government.

Conservative, moderate, and ideological Republicans ought to be pressuring Donald Trump for equitable representation. If this election is left up to Democrats, i.e. the Alt-Right or Independents or Blue Dog Democrats, then we’re finished. Conservatives will never show up in November to vote for a candidate representing those interests over ours. The “Alt-Right” does not exist. Democrats without a candidate do.