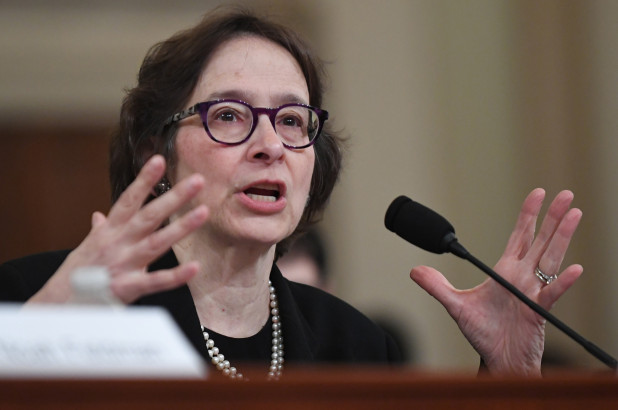 Quite recently, the House Judiciary Committee, headed by Congressman Jerold Nadler, empaneled a group of legal scholars to address the rationale for impeachment.  One of these “scholars” was Professor Pamela Karlan from Stanford University who distinguished herself by making a joke that slighted President Trump as well as his son.  She subsequently issued non-apology apology but her comments led to an appropriate investigation into her past.

It turns out that Professor Pamela Karlan, the Kenneth and Harle Montgomery Professor of Public Interest Law at Stanford, is an open hater of white men.  Here is part of a speech she gave in 2017 at the American Constitution Society, “We have to seize back the high ground on patriotism and on love of our country because we have more reason than they do to love America. The rich, pampered, prodigal, sanctimonious, incurious, white, straight sons of the powerful do pretty well everywhere in the world, and they always have.”  She also describes herself as a snarky, bisexual Jew.

A couple of decades ago, I experienced a situation with a woman professor like Karlan.  My daughter was going to George Mason University to finish up a few courses. She ended up in a class run by a radical feminist, like Karlan, who filled her classes with “girls” who thought like her.  No boys were welcome in the class, and if one managed to have signed up by accident he quickly resigned often losing money in the process. The rumor is that the George Mason administration knew about their radical feminist problem but did nothing – until this “professor” happened to insult an elected public official who had much to say about George Mason’s government funding.

Here is a bit of advice for parents with a son or daughter about to enter college.  If they are going to go into sociology, psychology, history, gender studies, identity politics studies, or other similar soft sciences, hand them a couple of suitcases and kick them out of the house.  Better some tough love right away than to have to administer it 4 to 6 years later when they have been indoctrinated into being a morose, mean, possibly drug addled and violent leftist. Face this sobering fact today – years of intense “anti-Americanism and grievance against society lessons” can’t be changed with a one-time sit-down in the living room or at the dinner table.

I have actually seen first-hand what happens when the anti-American indoctrination has been completed.  The parents no longer have a son or daughter. What they have is a perpetual sub-adult who thinks he or she is entitled to what they want and that all their problems were caused by someone else, particularly their parents.  If drugs are involved the situation can easily become a lifetime of torment for all. The costs associated with decades of psychiatrists and treatment centers can be in the hundreds of thousands of dollars. In too many instances there are abandoned children left uncared for by their drug addled parents – it is not unusual for aging grandparents to take over the responsibility of child rearing.  Lastly, there is the ever-present sense of foreboding that a son or daughter’s death is but a moment away far exceeds the cost of college.

A lot of graduating high school kids should join the military to learn a trade and get some real and tough life experience.  If the military isn’t attractive, then a paying job is a viable alternative to gain life experience and even get a start on a career.  Community colleges that teach a trade are a great idea, and many trades need new skilled laborers. A four-year college or university with a science, technology, engineering and math/manufacturing degree at the end can be a smart choice.  (The American Council of Trustees and Alumni (ACTA) has information on what college students will learn and the cost/benefit associated with attending a large number of the colleges.)

So, good luck, hope your high school graduate can avoid a Karlan or some other similar radical.  Hatred like hers is a terrible way to go through life.