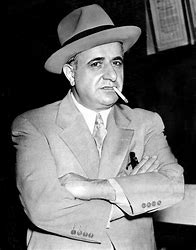 Back in the American mafiaâ€™s freewheeling days, when it seemed almost a law and an entire culture unto itself â€“ indirectly enabled by FBI Director J. Edgar Hoover, who didnâ€™t believe organized crime existed â€“ systematic murder was a tool for enforcing the syndicateâ€™s rules and policies. As the mobâ€™s structure became more fixed, the capos (bosses) decreed that murders must be â€œsanctionedâ€ by the capo di capos, and would be carried out by a designated arm, which became known as Murder Incorporated. It was headed by the ruthless killer and underboss, Umberto (Albert) Anastasia, who earned the well-deserved moniker, The Mad Hatter of Crime.

In the ten years of this execution squadâ€™s operation, Anastasia and his â€œsoldiersâ€ carried out no fewer than 400 (and possibly as many as 1000) murders, most of which were never solved. Anastasia was not prosecuted for any of these crimes â€“ probably because he didnâ€™t personally participate in most of them. Ultimately, his involvement in a power-struggle for control of one of the syndicateâ€™s crime families led to his own assassination, in October 1957. Anastasia was shot to death by two masked men as he sat in a barberâ€™s chair at the Sheraton Hotel in midtown Manhattan.

His driver had left Anastasia alone for a few minutes to park their car in a nearby garage. It was never discovered if the driver had deliberately left Anastasia unguarded as part of a setup to clear the way for his killing. (One doubts that NYC police took very great pains to find out.) Whatever the truth might have been, Albert Anastasia died by the same sword he had lived by. True to form, no one was ever prosecuted for his murder.

I relate this sordid snippet of crime-history as segue to observations on the present day, when murder â€“ or at least verbal advocacy thereof â€“ has become fashionable in (of all places!) presidential politics. During both the 2016 and 2020 campaigns, and for the first time in my memory, I have heard notable figures suggest (aloud!) that politicians they donâ€™t like (or who are simply in the way) might be â€œeliminatedâ€ more efficiently by assassins or illness than by voters.

During a â€œjokefestâ€ at the Washington Press Club, in 2016, Senator Lindsey Graham said, â€œIf you killed Ted Cruz on the floor of the Senate, and the trial was in the Senate, nobody would convict you.â€ (Har, har, har! Isnâ€™t that rich?)

A few weeks later, noted Christian apologist and New York Times writer Ross Douthat tweeted: â€œGood news guys, Iâ€™ve figured out how the Trump campaign ends.â€ He included a clip from a little-known film, The Dead Zone, in which a man sees a vision of the future predicting that a current candidate for the Senate will eventually start a nuclear war. To save the world, the visionary uses a rifle to try to assassinate the candidate.

To his credit, Mr. Douthat quickly tweeted a retraction and apology: â€œA lot of readers were offended by my Trump/Dead Zone joke from yesterday. I can see why, and I’ve deleted the tweet. Apologies.â€ Iâ€™m not aware that Senator Graham issued any kind of apology for his â€œjoke.â€ (Exercise for the reader: try to imagine how media might receive a similar â€œjokeâ€ about Hillary Clinton or President Obama.)

Today, reports that President Trump and his wife have both tested positive for the COVID-19 virus, have made Democrat-leaning reporters and other activists giddy over the prospect that their despised nemesis might be â€œeliminated.â€ One Biden acolyte said he hoped Mr. Trump â€œwould die.â€ Fortunately, Democratic candidate Joe Biden didnâ€™t join the ugly chorus. In a welcome gesture of civility, Mr. Biden tweeted his wishes for President and Mrs. Trumpâ€™s swift recovery.

Not all of the ill-wishes are directed at Republicans, however. Democrats are openly speculating that if Joe Biden is elected he might soon suffer an unfortunate â€œaccidentâ€ to clear the way for Kamela Harris to become president. (â€œSo tragic, so unnecessary,â€ as Don Corleone might say.) Iâ€™ve been following politics for 68 years, but I canâ€™t recall a time when the level of public discourse has sunk this low. Are we in Uganda?

In November 1950 I was only seven years old â€“ still too young to be aware of news â€“ when two armed Puerto Rican extremists broke into the grounds of Blair House with the clear intention of assassinating President Truman, who was temporarily living there. In a wild gun-battle, Secret Service agents and Capitol policemen kept the would-be assassins from entering the house. A Capitol policeman and one assailant were killed, and two other officers were wounded. (A friend of mine actually witnessed the shootout from a nearby drugstore. He and his pals thought it was a movie scene being filmed.)

The incident shocked the country. No person of either political party ever said it was too bad that the assassins had failed. Mr. Truman wasnâ€™t very popular at the time, but he was still our president. Wishing him harm simply wasnâ€™t done.

In 1954 Puerto Rican separatists tried again. Four armed men fired 30 rounds from the Ladiesâ€™ Gallery into the House of Representatives, while the Congress was in session. Five members were seriously wounded.

When I was a college senior, President John Kennedy was shot to death in his open limousine on a bright November day in Dallas, Texas. The shock and horror of that event has never left me. In that same decade JFKâ€™s brother, Robert Kennedy, and civil rights activist Martin Luther King, Jr. were also killed by assassins. In the 1970s, assassinsâ€™ bullets narrowly missed President Gerald Ford in two separate incidents, during a trip to California.

In 1981 Ronald Reagan had a very close call when John Hinckley fired six shots at the president and his party, at close range, as they emerged from a garage-exit of the Hilton Hotel in Washington, DC. Press Secretary James Brady was wounded in the head. Hit in the lung, Mr. Reagan didnâ€™t realize the seriousness of his wound. But his quick transport to a nearby hospital by Secret Service agents undoubtedly saved his life. The president collapsed with a blood pressure of zero as he attempted to walk into the hospitalâ€™s emergency entrance. Only much later did the public learn how near the president was to death.

In June 2017 a left-wing extremist, James Hodgkinson, opened fire on Republican congressmen and staffers at a ball-field in Alexandria, Virginia, as they practiced for the annual Congressional baseball game.  House Majority Whip Steve Scalise and lobbyist Matt Mika were seriously wounded. Capitol Policewoman Crystal Griner and congressional aide Zack Barth were also hit during a ten-minute gun battle which stopped the shooter from reaching other members of the GOPâ€™s team who had taken cover in the dugout. Finally, Hodgkinson was fatally wounded.

With all this mayhem having occurred just within my own lifetime, we should understand how terrible any politically motivated killing is. Political differences always flourish among us â€“ today, possibly more than ever. I didnâ€™t agree with the politics of either JFK or his brother Robert, but I was absolutely horrified by their deaths, as were millions of my fellow citizens. President Kennedyâ€™s killing was especially gruesome. Seated next to him in the car, Mrs. Kennedy was spattered with his brains as a bullet exploded his head. I always felt that she deserved a free ride for the rest of her life because of that dreadful event. No one should have to go through that.

No decent person should ever advocate, praise or find pleasure in the violent death of another human being. This includes any killing for political reasons, no matter how much we might disagree with that person. No one should ever suggest that the country might be better off if an opponent were killed â€“ not even in jest.

To understand this, ask yourself if a â€œjokeâ€ urging the rape of some female politician can ever be acceptable. Obviously not. Any politician, reporter or other public figure would be pilloried and driven from public life for such a statement. What makes us think, then, that speculating about killing a political opponent â€“ or hoping that he might die from a virus â€“ is funny? No one should even think such a thing.

I never heard a public apology from Senator Graham for his tasteless â€œjokeâ€ about Senator Cruz, but I hope he has issued one privately Some things are beyond the pale. Joking about killing a respected colleague is one of them.

Almost every day some politician declares, â€œThis is not who we areâ€¦â€ on some issue. The statement is a bit hackneyed, but we shall do well to apply it to this discussion. Our flirtation with the Anastasia Model should be a national wake-up call: No, this is not who we are! Problems and political differences cannot be solved by violence. Wishing ill on an adversary is disgraceful.

Letâ€™s crawl out of the gutter, clean ourselves off, and try to remember what decency looked like. Enough with the cracks about â€œkillingâ€ a political opponent, or hoping for his death. This has no place in our political discourse. Thinking and speaking this way corrupts the soul. We really have to cut this out before another nut-case, like Hodgkinson, is spurred to commit a dreadful act.

Nowadays the Bible is pressed into service to support all kinds of causes by politicians and religious figures. Did you realize, for instance, that the Bible actually supports unregulated national borders? The Pope says it does. (Who knew?)

But one seldom hears Biblical passages that resound across the centuries like a great bell, calling us to righteousness. One of these is found in Paulâ€™s letter to the Philippians. I commend it to my readersâ€™ reflection:

If there was ever a time to think on these things, this certainly is it.