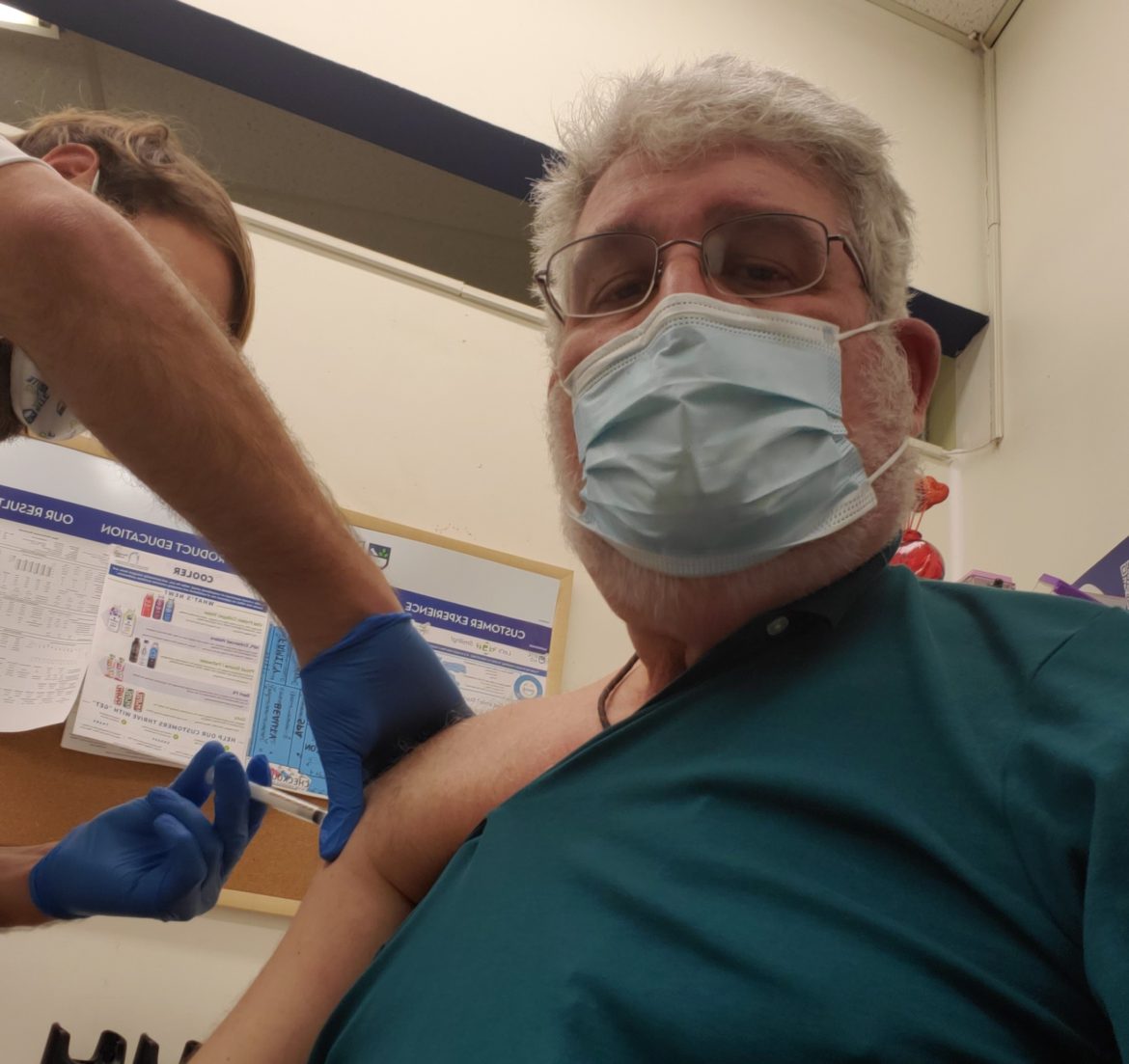 The author getting his COVID 19 shot at a Rite-Aid in Norfolk. The media and politicians are failing to tell the public about retail pharmacy inoculations.

The best way to get the COVID vaccine? Retail pharmacies

The banner headline in the â€œVirginian Pilotâ€ screamed on April 2: â€œ16 and older vaccine eligible April 18â€   as the Northam administration announced expanded eligibility for the shot we hope will end the COVID 19 pandemic.

The article went on, quoting state officials with rosy scenarios about COVID distribution at state and local centers.

In that same April 2 edition, the newspaper reported in separate stories that Virginia Beach was moving to Phase 1c, but Chesapeake was moving to Phase 2.  One wonders why two cities with similar demographics are at different phases, but Norfolk and Portsmouth also are in 1c.

However, there has been little to no media coverage of what I found to be the best and most efficient way to get inoculated â€“ registering through one of the big retail pharmacy chains, or even through grocery stories like Harris Teeter, COSTCO and Kroger

I signed up on the stateâ€™s web site in mid-February, which is at https://www.vdh.virginia.gov/covid-19-vaccine/  Some people will tell you â€œGo to the CDC web site to register,â€ but they will just refer you to the state department of health.  Neither VDH nor CDC have links to the retail pharmacies, as if the private sector is competition in all of this.  I thought the feds were paying for the vaccine no matter where you get it.

Finally, a friend in Texas told me her son (who is only 24) got his vaccine at a Kroger.  She suggested looking at the pharmacy web sites, which I did.

These web sites ask you your age, race, job category, as some jobs are in 1a or 1b.  Being under 65 kind of rules me out of that category, so I noted I was obese and have hypertension (which is true).

After doing their survey, I got a message â€œCongratulations!  You are eligible for a vaccine!â€ which enabled me to register.

Walgreens, which is my preferred pharmacy, had no available slots in my area.  CVS had an opening in Murfreesboro, NC, a one hour and 10-minute drive from Norfolk, where I live. I then found a closer inoculation in Franklin, outside of Chesapeake, at a Walmart  And then, I checked Rite Aid and BINGO, they had an April 1 opening in Norfolk.

There was a slight wait.  I was called to the back and showed ID and no other questions were asked, other than if I was feeling okay.

I got my shot (Moderna) and sat for the requisite 15 minutes and then left.  A few days later, Rite-Aid sent me a text with my appointment for the booster shot in late April.

Prior to learning about the pharmacies, I re-registered with VDH a second time using a different phone number and email, and in the survey, said I was Hispanic.Â  On April 3, I got an email directing me to get an appointment for my shot at a special location at the old Military Circle Mall in Norfolk, which FEMA andÂ  Gov. Blackface announced with heraldry last month.Â  Of course, I did not register, and learned today they are taking walk-ins at that location.

It is very evident to me that both the Trump and Biden administrations, and the governors, have misled the media and thus, the public, into thinking they have to register with the government, only, to get a shot.  This is not true, as my case illustrates.

Pharmacies are where most of us are accustomed to getting vaccines, and that is where the Trump and Biden administrations should have focused their efforts and getting them the special freezers which the Pfizer and Moderna vaccines need for storage.

As a result, state and local health departments have had to hire more personnel or use volunteers because they became the major distribution sites.  Actually, Virginia is 12th in inoculation, according to this trade publication  which I suppose is not too bad, but when Gov. Shoe Polish Face and Joe Biden tell you all will get a vaccine after April 18, that is not true.  They are eligible as of April 18, but the way things are going, inoculations are going to take many more months before we reach herd immunity.

The other travesty here is the media, which seems all-too-eager to rewrite the press releases of the government without bothering to tell the public about alternative vaccination sites. Only when I emailed the Virginian Pilot to tell them I got the shot at Rite-Aid did they bother to run a story listing all the private sources for vaccines.  Yet, that story got lower play than the one with Northam visiting the Military Circle site last week with big fanfare

While I was online at Rite-Aid, I asked an African American lady in front of me if she was there for her COVID shot.  She said she didnâ€™t know Rite-Aid was offering it.  So, I told her about the Rite-Aid web site.

I wish more of our politicians and media would do the same.

The best way to get the COVID vaccine? Retail pharmacies was last modified: April 8th, 2021 by Guest Contributor Ken Reid