Blacks/Taxpayers Will Suffer by Repealing "Stand Your Ground" 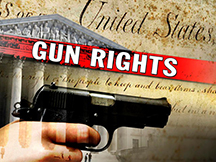 Certainly a shame that we still break things down between blacks and whites or African-American and Caucasian, but black liberal leaders who have to justify their existence by exploiting their own heritage, such as Al Sharpton, Jesse Jackson, President Obama and Eric Holder tend to trample all over [their own] people to do so.

So is the case after the Zimmerman trial and Stand Your Ground laws.  Understand that Zimmerman was NOT tried under the stand your ground statute.  However, Travon Martin’s family and black liberal leaders across the nation have latched on to Stand Your Ground laws as if getting rid of them will help blacks from being harmed by non-blacks.

As Dr. John Lott*, an economist based in Virginia who recently authored the top-selling book, More Guns, Less Crime, points out, African-Americans benefit from “Stand Your Ground” self-defense law at a rate far out of proportion to their presence in the state’s population.

For example, black Floridians have made about a third of the state’s total “Stand Your Ground” claims in homicide cases, a rate nearly double the black percentage of Florida’s population. The majority of those claims by Blacks have been successful, a success rate that exceeds that for Florida Caucasians.

Of course, this, despite an assertion by Attorney General Eric Holder that repealing “Stand Your Ground” would help African-Americans.  Genius.

Factually, nearly one-third of Florida “Stand Your Ground” claims in fatal cases have been made by black defendants, and they have used the defense successfully 55 percent of the time; at the same rate as the population at large and at a higher rate than white defendants, according to a Daily Caller analysis of a database maintained by the Tampa Bay Times.

Fundamentally, Obama, Holder, Sharpton, Jackson and these other black liberal leaders are attempting to remove what seems to be an essential, used and necessary law at the expense of their own race–for a little media time and exposure.  Sad.

At end, not only are these black liberal leaders selling out their own race, but the collateral damage will be a clear increase in convictions of blacks who can no longer claim a “Stand Your Ground” defense and will likely be charged and found guilty of murder or manslaughter.  Not to mention the cost to taxpayers.
_______
*John R. Lott Jr. is an American economist and political commentator. Lott was formerly employed at various academic institutions including the University of Chicago, Yale University, the Wharton School of the University of Pennsylvania, and the University of Maryland, College Park, and at the American Enterprise Institute conservative think tank. He is currently a Fox News opinion contributor.  He holds a Ph.D. in economics from UCLA.

Lott has written for both academic and popular publications. He is a frequent writer of op-eds, and has written seven books, including More Guns, Less Crime, The Bias Against Guns, and Freedomnomics. His most recent book is At the Brink: Will Obama Push Us Over the Edge?

Lott is best known for his role in the gun rights debate, particularly his arguments against restrictions on owning and carrying guns. Nobel laureate Milton Friedman said that “John Lott has few equals as a perceptive analyst of controversial public policy issues.” Newsweek also referred to Lott as “The Gun Crowd’s Guru.” Lott is also listed in “Who’s Who in Economics.

Blacks/Taxpayers Will Suffer by Repealing "Stand Your Ground" was last modified: August 10th, 2013 by Brian Reynolds