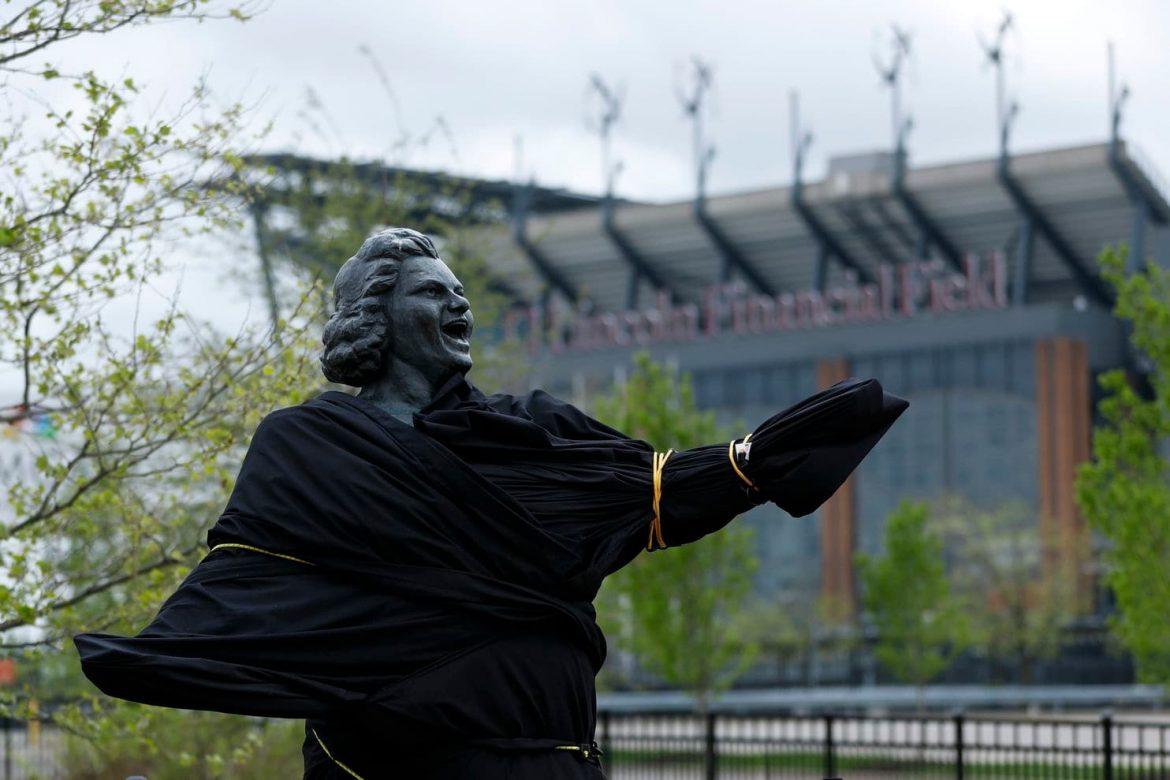 The “Broad Street Bullies” wimp out to Black Lives Matter

I never get overly angry when liberals try to boycott companies like Chick-fil-A or Hobby Lobby for their owners’ views, or ads on Fox News, and I never got overly worked up over NFL players kneeling during the National Anthem, though I disliked it.  And, even the whole Confederate monument controversy never really touched me, though I oppose their removal.

But now my favorite American League baseball team, the Yankees, and the Philadelphia Flyers NHL hockey team — I was a serious fan growing up in New Jersey — have stopped playing Virginia-born Kate Smith’s “God Bless America” at their games, after Black Lives Activists discovered she sang songs in the 1930s with racist lyrics.

The Flyers, affectionately called the “Broad Street Bullies,” as their arena is on South Broad Street and they often picked fights with the other team, have gone one step further to placate the angry radicals – the team first covered a statue of Ms. Smith that was placed in front of the Flyers’ arena after her death in 1986, and then removed it.

According to the Philadelphia Inquirer “local Black Lives Matter activist Asa Khalif, who is also running for City Council,   welcomed the move to cover up the statue and called on the Flyers to remove it, saying he and other activists had expressed their anger over Smith’s work to the team for more than a year.”

Ironically, the two songs Smith sang, “That’s Why Darkies Were Born” and “Pickaninny Heaven” also were sung by black bass baritone Paul Robeson  — who grew up in my hometown, Princeton, NJ, and graduated Rutgers, my alma mater.

In a statement published Sunday, Flyers President Paul Holmgren said, “The NHL principle ‘Hockey is for Everyone’ is at the heart of everything the Flyers stand for. As a result, we cannot stand idle while material from another era gets in the way of who we are today.”

I seriously doubt Princeton, NJ, and Rutgers will be besieged by activists seeking statues of Robeson or buildings named for him be removed, as he was a communist and liberal hero  (In fact, he was a Stalinist dupe

Princeton was a community where most residents were New York Rangers fans.  But I wore orange and black Flyers gear to school and loved watching Flyers games and Stanley Cup victories in the 70s.  I learned to impersonate the high-pitched voice of Flyers radio/TV announcer Gene Hart, who would scream whenever a player got a goal — HE SCORES FOR A CASE OF TASTY CAKE! (those are cupcakes made in Philadelphia).

The singing of God Bless America before games was a Flyers novelty.  I do not recall any other team that played it instead of the Star-Spangled Banner.  Kate Smith sang it live a few times in the old Spectrum arena.

The Flyers began using the song in 1969 during the Vietnam war when management noticed a number of fans were not standing for the National Anthem, according to this op-ed by a former Flyers VP.

The song became a good luck charm for the team, whose records show it won more games when the song was played – much like the Dallas Cowboys claim their “away” white uniforms give them luck.

So, a number of political issues are at play here.

First, Corporate America has again shown how easy it buckles to liberal activists when companies are confronted with boycott threats or angry protesters.

Fearful of controversy harming their brand or market share, companies (and academia) are quick to placate the Liberal Mob, and it always seems conservatives or the company’s defenders are in catchup or react mode.  In fact, conservative media has said little of the Kate Smith controversy.

Second, the decision by the Yanks and Flyers sets a very bad precedence.  Banning God Bless America and removing the Smith statue now means it’s open season by the ERASE-ism activists (as a fellow Trumpster calls them) to go gunning for any entertainer, alive or dead, for even the slight utterance of lingo that the Multicultural Tribunal finds “offensive.”

YouTube has reportedly removed the two songs Kate Smith sang, while a number of.  Waffen SS marching songs remain on the channel and I wonder how long it will be before the Al Jolson movie “The Jazz Singer,” or the 1980 remake with Neil Diamond, will come under attack.  Diamond, a liberal, could find his star removed from Hollywood Boulevard.

Born in Greenville in Augusta County, VA, and schooled in Washington, DC, Kate Smith never sang those racist songs at games and she was probably contractually obligated to sing them to launch her career.  She was among the biggest fundraisers for war bonds to fight the Nazis and Japanese fascists. Her family was very upset about the statue being removed.

Third, the incident again shows a conflict between the Old America and New America and how each faction views history.  Although I was raised in a Leftist household, and only became a Republican in 2000, it never occurred to me that God Bless America or Kate Smith was a problem.  To the media and New America liberals, the Old America elected Trump and we need to be “re-educated,” much like what Stalin and Mao Zedong did to millions.

The way these new ERASE-ism liberals do this is to clobber celebrities (largely whites) yet defending Congress members Ilhan Omar, and Rashida Tlaib, and our new Northern Virginia delegate Ibrahim Samarah , who can use anti-Semitic or anti-American lingo and get away with it mercilessly and claim racism or bigotry when called out on it.  The double standard is becoming sickening.

The airwaves are full of discussion of the dangers and wackiness of the Democrat Socialist ideas like “Medicare for All” and Free College Tuition.  But frankly, the only reason it’s being embraced by so many Democrats is to raise money and get votes from the Pink Hat Leftist anti-Trump activists.  None of these programs like the Green New Deal have any serious chance of being adopted imminently.

However, New America’s march of political correctness and erasing history and banishing offenders seems to be frighteningly successful and conservativism (the countervailing force to stop Liberal Fascism) seems incapable of stopping it.

But when the Broad Street Bullies buckle, you know we have a serious problem.

It’s not the socialist policies I fear – but the unholy alliance of activists and the White House – The Bull Elephant August 20, 2019 at 2:45 pm

[…] Failing to change those sports mascots, activists unleashed pressure on teams like the New York Yankees and Philadelphia Flyers to stop playing “God Bless America” since it was immortalized by Kate Smith, who sang racist songs in the ‘30s (though black singer and Leftist icon Paul Robeson sang the same songs), and  remove her statue in front of their home arena. […]

[…] Black Lives Matter led the Philadelphia Flyers to cancel, after nearly 40 years, the singing of Kate Smith’s God Bless America  , and removal of her statue in front of their […]