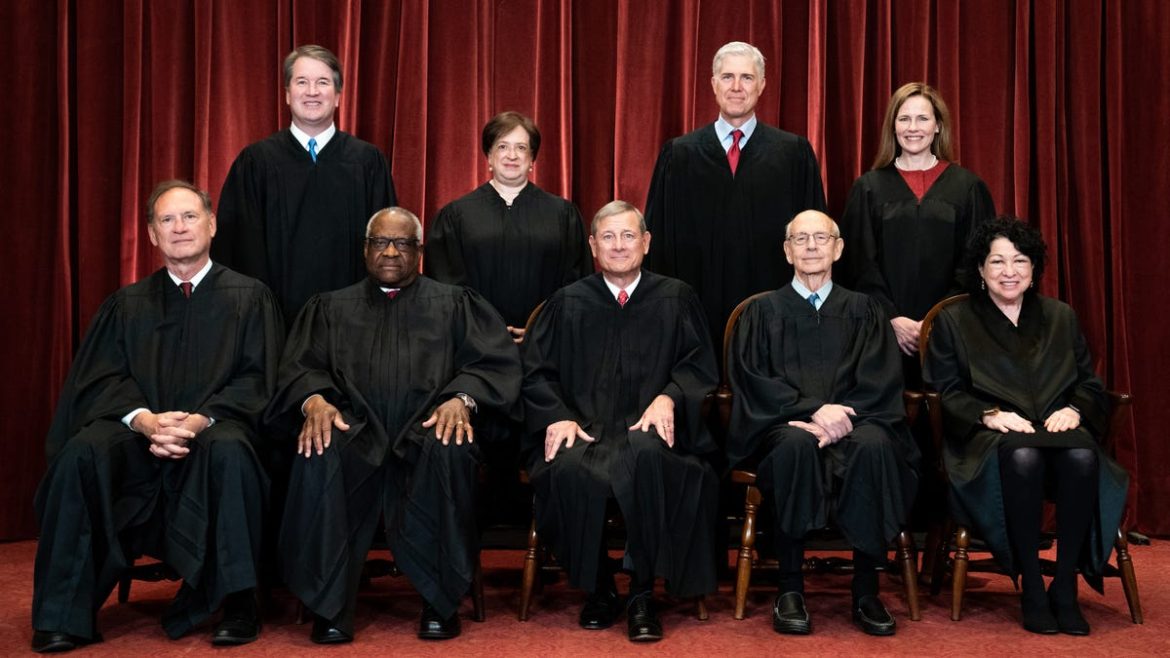 The Compact and the Suggestion Box

‘OK, Z-man,’ I can hear readers saying. ‘You’ve really flipped this time. Nothing remotely like this will happen. It can’t possibly happen. You can’t just disobey a Supreme Court ruling. Can you?’

Right. Of course you can’t. The Supreme Court Police will enforce the Court’s ruling. No problemo. By the way, who is the SCPD Commissioner? And what enforcement actions have they previously taken? Will anyone be arrested for non-compliance? Who (or what) is the controlling authority in such a matter?

You’ve never heard of the Supreme Court cops?? Relax, you’re off the hook. There aren’t any. But then who enforces the Supremes’ rulings? Answer: The People, led by our president, and supported by our elected representatives and senators. The fact is that those elected agents govern under a Compact, by which everyone agrees to scrupulously follow the Constitution and observe all interpretive rulings by the Supreme Court, unless expressly permitted otherwise by that document.

Essentially, the Constitution amounts to a “box of suggestions” that exercises power only through that mutually observed Compact. OK, they’re pretty solid suggestions, but there is no police-enforcement. As long as the Compact is honored by all government organs, states, political parties, blocs and splinter groups, we’re good to go. But if the Compact is disregarded, or pitched altogether, then we no longer have orderly governance, and our whole system goes to hell in a hand-cart.

‘Can’t happen,’ say you. Well, it has happened, and it was a real mess when it did. We call it the Civil War, or the War Between the States, or the War of Northern Aggression (according to some die-hard Southerners). After the election of Abraham Lincoln in 1860, seven of the 34 states decided that they didn’t want to be governed by a guy they thought was anti-slavery, so they pulled out of the Union in early 1861 and formed a separate country which they called the Confederate States of America.1

At first the rebellion was all just a lot of hot air and angry talk, until South Carolinian military units started a real shooting war by cannonading Fort Sumter. Lincoln called for 75,000 volunteers to suppress the rebellion, and four more southern states2 seceded – bringing the Confederacy to eleven states, and leaving the Union with nineteen free states3 and four slave states.4

Four years of desperate fighting followed – costing over 600,000 deaths and more than a million wounded, across both sides of the conflict. For a time, the Confederacy had better military leadership and looked like they might win the argument. But finally the Union’s advantage in manpower and industrial capability tipped the balance. Constitutional governance was restored, but large sections of the South were reduced to rubble.

Is civil war on the horizon? Maybe not the kind of shooting war Robert E. Lee and Ulysses S. Grant engaged in. But some kind of serious dustup will certainly happen, until one of two things occurs:

So where is abrogation of the Constitutional compact occurring? Isn’t it all just smoke blown by deranged Grassy Knoll-ers like me? Not exactly. Consider a ruling by the Supreme Court on August 24th, requiring the Biden administration to reinstate a Trump policy that makes migrants wait in Mexico while U.S. officials process their asylum claims. The Biden gang wanted to pitch that policy and open wide the gates. But a conservative SCOTUS majority scotched that attempt by ruling that the Biden administration had failed to show that their decision to end the program was not simply “arbitrary and capricious.” (The court’s three liberal associate justices, Stephen Breyer, Sonia Sotomayor and Elena Kagan, would have allowed the administration to ditch the wait-in-Mexico program.)

The proverbial Man on the Street typically responds to Court rulings like this by checking his wallet. If he thinks the ruling won’t affect him, he says, “I don’t care. Let ‘em do what they want. They’re all crooks.”

But that Man-on-the-Street response misses the point. The issue in this case is whether Good Old Joe will follow the Court’s directive and actually re-establish Mr. Trump’s prudent policy, which had kept floods of asylum-seekers from crossing the border and disappearing into the country. If he obeys, all is well.

But if he ignores the ruling, issues incomprehensible statements, and makes rude noises with his armpit, it will mean that he’s breaking the Constitutional Compact. And that will not be good – particularly because breaking the Compact will become Standard Operating Procedure for activist presidents. Worse yet, he might pretend to follow the Court’s ruling, while evading it via sly stratagems – a truly ruinous course.

By a 6-3 vote on August 26th, the high court ruled that the Center for Disease Control and Prevention had overstepped its authority by imposing a fresh eviction-moratorium in areas struggling with high caseloads from the Delta variant. The ruling supported a bid made by landlords to block the pandemic-related protections for non-paying renters facing eviction. The court’s conservative justices ruled that it was up to Congress, not the Executive, to renew the moratorium. (Three liberal justices dissented.)

Whether Congress will follow the Court’s direction, and extend the eviction-ban, remains to be seen. So far, the Biden administration has not resisted the ruling, but seven states and the District of Columbia have done so by enacting their own statewide bans. (Ditching the Compact is evidently a contagious disease.)

The issue of upholding the Constitutional Compact is poised on a razor’s edge, as more cases are bound to arise, tempting state and federal institutions to abandon the Compact. You don’t have to be John Adams or James Madison to see how dangerous that is. In fact, it’s not just risky – it’s the road to ruin. Only voters can stop the parade romping down that road, by electing leaders who understand and respect the Compact. But too many voters either want to ditch the Compact, or don’t understand its importance.

And then there’s the issue of election-corruption. Those who wish to undo our Constitutional system have learned how to steal elections. I hear a lot of brave talk about how we’ll right the ship in the 2022 elections, but let’s not raise the victory-flag until we see if we can have honest elections. The jury is still out on that.

Long ago, as the nation slid down the slope toward civil war, President Abraham Lincoln penned these famous words:

“A house divided against itself cannot stand. I do not expect the house to fall, but I do expect that it will cease to be divided. It will become all one thing, or all the other…”

If you’re a person of faith, pray for the country. We need all the help we can get.

The Compact and the Suggestion Box was last modified: August 30th, 2021 by Woody Zimmerman