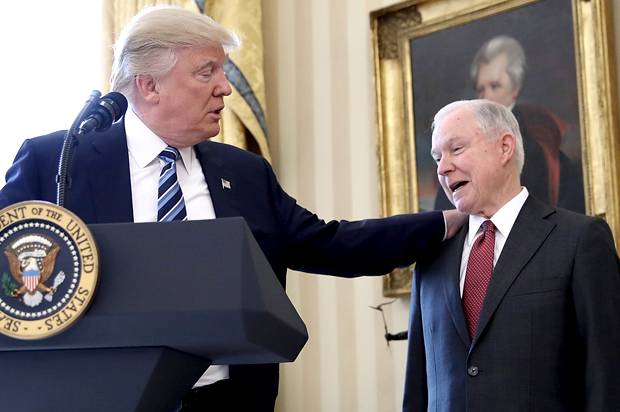 The Crisis of Justice

Both the Department of Justice and the FBI are demolishing both the theory and practice of justice in this land of the free, setting a standard so low that it is leeching into the fabric of other federal agencies, the courts, and right down into the state and local governments.

Is a lawless, new “normal” emerging? Will this be the legacy of the twenty first century to the American experiment?

What were once considered the essential survival gear for justice and individual freedom in our Republic are being thrown overboard – equality under the law, integrity of process, managerial and individual accountability, and a fundamental respect for the Bill of Rights are being lost.

The question now is whether the loss is irretrievable.

The supremacy of the unaccountable Administrative State overseen by an elite ruling class with unchecked power to run the nation’s affairs without constitutional brakes, serious oversight or financial discipline by the people’s representatives in Congress, is now in a full-blown crisis that imperials the very basis of an elected, representative government.

This crisis has been growing in scale for decades, observable in the long catalog of events that do come to public light, where the lack of professional judgment, common sense, managerial accountability and the upholding the rule of law is shocking and dangerous. Events where the lives of average citizens, not politicians, are directly affected, destroyed or even ended.

And they form a pattern of behavior, clearly more far-reaching than those events that do come to the public’s attention, which calls into question whether institutional reform is even possible.

In today’s petri dish we have the ongoing spectacle of the Robert Mueller-James Comey axis – two very bad top cops who both have more baggage than a Samsonite factory. They have taken turns gravely damaging the FBI, and with the help of its dishonest leadership under the Obama Administration, and its facile management under the current Administration, they have been at the forefront of turning DOJ itself into a political weapon.

With the Mueller-Comey scandal – and they are the scandal – it has been obvious for nearly a year that the so-called “Russian dossier,” the canard that the Trump Campaign had “colluded” with the Russian government, and that President Trump obstructed justice by firing the incompetent FBI Director Comey, were preposterous on their face.

The details of how and why this farce has been pushed into the public square is a tale that is footnoted and sourced to death now, to the point that there is no room for ambiguity to even casual observers.

The entire Russian story was created out of whole cloth for the precise purpose of destroying the candidacy of Donald J. Trump –  and when that failed, to pursue a coup d’état against the duly elected President. Nothing less.

(I have written on the Mueller-Comey axis here, here and here in the last five months alone.)

The sordid details can be boiled down in a few sentences. The now infamous Russian dossier was created by a far-left “research” firm, Fusion GPS, and filled in by a very clever former British MI6 officer, Christopher Steele, who seduced the Democratic National Committee, the Clinton campaign itself, several gullible Republicans, and perhaps even the FBI into paying  millions of dollars for the bogus report. The FBI, even though it knew that the document was a total fabrication, nonetheless allowed the report to stand as the basis for further investigations and proffered the report as evidence before the federal FISA court as authentic, which then allowed the FBI to electronically monitor the campaign of Donald Trump, “unmask” unwitting private citizens taking part in those communications (pressed by the Obama Administration), up to and including the then the President-elect and his direct subordinates, we have to assume.

It was recently revealed that Special Counsel Mueller has spent over seven million dollars in just a few months, unaccountable to anyone, loading his office with nearly twenty ulta-liberal partisans (two of whom, so far, have been shown to have direct conflicts with the investigation) who evidently needed a gig to make their mortgage payments.

What have those millions purchased? So far they have one guy “lying” to the FBI (preceding the Trump Campaign and unrelated to the Russia inquiry) as the trophy crime.

Meanwhile, the real scandals – the real collusion that makes Watergate look like a Bible study – of the 2016 election cycle are left basically untouched. They revolve around the Russian dossier creation and funding, the Obama Administration and Hillary Clinton and the total corruption of the FBI, its compromised investigation in her server scandal and 33,000 missing emails, withholding and destroying evidence, tarmacs, the Uranium One $140 million paid directly and indirectly to the Clinton’s (under the watch of first then FBI Director Mueller, followed by James Comey), and the various other “pay to play” schemes she and her husband engaged in, and the list is hardly exhausted.

And every new day overturns a new rock under which conflict of interest, outright deception and even illegality on the part of the FBI or the DOJ, are hiding.

This is what justice looks like in the new normal. You don’t like the election results? No worries; the hammer of the organized Administrative State, its law enforcement and intelligence agencies will be used to modify the results.

The greatest problem with this growing official lawlessness – or extra-legal application of justice – is that it isn’t contained in Washington. It spreads – it has spread – by the hundreds of examples into the path of average citizens, going about their lives, tripped up in a mammoth overreaching legal system whose primary function is to finance and promote its own power.

We now have the justice the state says you may have.  It’s the stuff that banana republics are made from.

The Crisis of Justice was last modified: December 14th, 2017 by Michael Giere

I stand with the good men and women of law enforcement, especially those at the FBI and the Department of Justice. Shame on those who attack their thankless efforts on behalf of the American people.

I stand with the GOOD men and women of law enforcement. Shame on those who won’t get rid of the bad.

Here’s an instance where I agree with Trump, and Trump and me both differ from Warmac (and the author of this piece): We back the FBI 100 PERCENT:

“Know, with me as your president, America’s police will have a true
friend and loyal champion in the White House – more loyal than anyone
else can be…The president of the United States has your back 100
percent.”

Mike, judging by the lack of comments to this article, it would appear that your writings have become even less popular than writings on the men’s room wall in a Greyhound bus station.

it is important that American citizens keep pressuring their elected representatives to make sure the rule of law is protected. Without the rule of law, we are back to the days of pharaohs, kings, dictators, tyrants and EU bureaucrats.