The Cupboard is Bare

The former speaker of the house made a remarkable comment a few days ago.Â  The cupboard is bare.Â  Thereâ€™s no more cuts to make.Â  Only a left-wing Washington politician could describe a cupboard – the federal budget – with over $3,000,000,000,000 in it as bare.

So this is it, huh?Â  The federal government has no choice but to spend more and more, and never less, forever.Â  There is nothing more we can possibly cut.Â  Nothing.Â  Hell, it was hard enough to swallow $85 billion in cuts necessitated by the sequester.Â  That is a fullâ€¦.two percent of the federal budget. 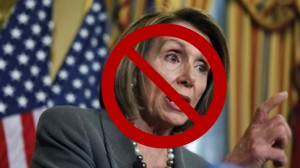 Of course, this is the same person who claims, with a straight face and strong conviction, that unemployment benefits create jobs and economic growth.Â  Seriously.

The fact that we keep adding trillions more to a national debt now a tick away from $17,000,000,000,000 has now vanished from the public radar screen.Â  It is no longer a disgrace, no longer shameful that we have become a debtor nation.Â  Itâ€™s just reality.Â  Get over it.Â  Thatâ€™s our childrenâ€™s (and their childrenâ€™s) problem, now isnâ€™t it?

The sequester was no way to cut the budget, weâ€™re told.Â  It was just awful.Â  â€œA scalpel rather than a meat cleaverâ€ was the clever poll-tested language used to describe how the â€œscalpelâ€ of negotiated, targeted cuts were acceptable, and the â€œmeat cleaverâ€ of the sequester would lead to untold misery and death in the streets.Â  Of course, the Congress, with approval ratings running neck-and-neck with used car salesmen, can hardly agree on the size of bathrooms in the US Capitol, so the idea of bipartisan agreement on sensible budget cuts?Â  Right.Â  Right.

This same woman went on to say that raising the ceiling to allow for trillions more in federal debt is “an issue that really shouldnâ€™t be a conversation,”

She even called those who want to even discuss reductions in the budget in return for giving the government authority to put trillions more on the peopleâ€™s credit card â€œlegislative arsonists.â€Â  Yes, it has now become de facto criminal behavior to want to even discuss reigning in a federal budget that has doubled since 2000.Â  Yes, doubled in the last dozen years.

And de-funding Obamacare?!?Â  No way.Â  Sure, most people donâ€™t much like it, in fact theyâ€™re downright frightened by it, but as this person once famously said, weâ€™d have to pass the bill to find out whatâ€™s in it.Â  And weâ€™ve passed it, so now weâ€™re in for it.Â  Permanently.

You know, and I know, that Republicans will ultimately cave in the face of seasoned leftist demagogues, confused and cowardly members of their own party and a morally bankrupt establishment media unwilling to tell the truth about leftist intransigence and the looming disaster that is the endless thirst for government control of more and more sectors of the economy.

But here is a simple fact: the debt ceiling remains the one and only remaining source of leverage for those legislators committed to fiscal sanity.

But in a nation whistling past the graveyard of social democracy, who actually believes that the ones who want to impose even a modicum of fiscal responsibility wonâ€™t be the same ones who wind up – again – as the bad guys?

The Cupboard is Bare was last modified: September 26th, 2013 by Tim Donner