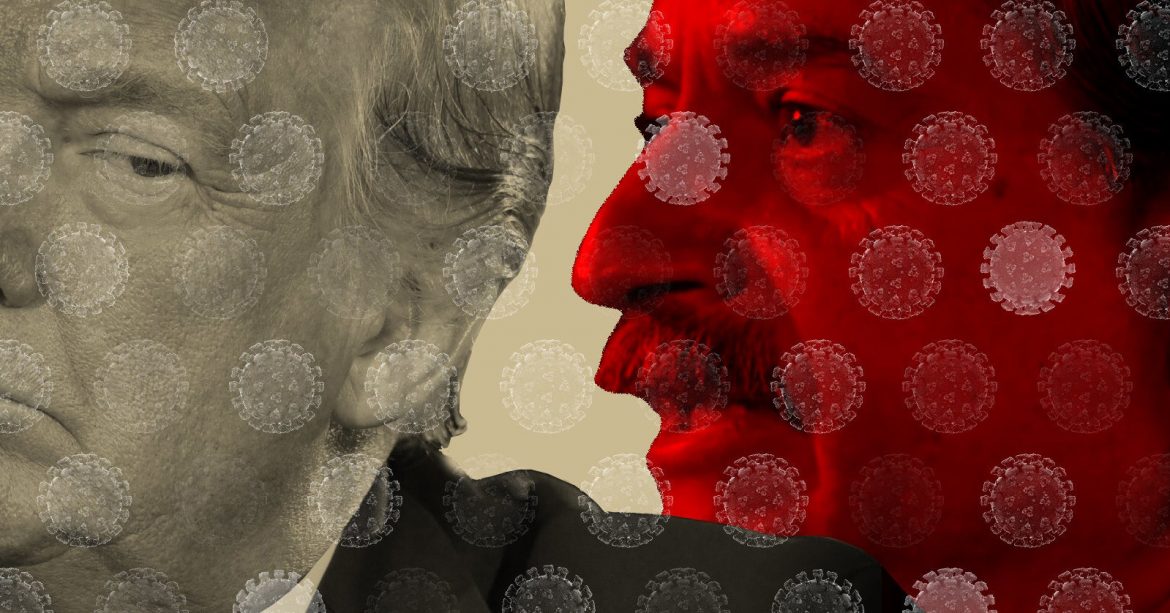 Stanford Medical School infectious disease expert John Ioannidis, right, tried to warn President Trump about the peril of lockdowns, but the meeting never occurred. His research shows the lockdowns did not slow COVID at all. (image source: buzzfeed)

The cure has become worse than the disease

When COVID first started raging back in March, President Trump issued guidelines to â€œslow the spreadâ€ and â€œflatten the curveâ€ and said, â€œthe cure cannot be worse than the disease.â€

But two studies released in January, which have garnered little media, cast doubt on the major instrument of combatting COVID â€“ lockdowns and stay-at-home (SAH) orders.

In a paper, published in the European Journal of Clinical Observation,  Stanford Medical School infectious disease M.D.s  Eran Bendavid and John Ioannidis studied the imposition of â€œnon-pharmaceutical interventionsâ€ (NPIs) in ten countries and concluded that while less-restrictive NPIs — which include social distancing and appeals to the public to reduce their social activities —  had a clear effect, more-restrictive NPIs– which include business closures and stay at home orders — produced no clear additional benefits.

They argue  that ordering businesses to close and telling people to stay at home did not appear to reduce rates of infection further. They write:

â€œWhile small benefits cannot be excluded we do not find significant benefits on case growth of more restrictive NPIs. Similar reductions in case growth may be achievable with less restrictive interventionsâ€¦ We do not question the role of all public health interventions, or of coordinated communications about the epidemic, but we fail to find an additional benefit of stay at home (SAH) orders and business closures.

Ioannidis came into the national spotlight in March because he questioned the lockdowns.     The liberal press (the Post) finally got around to writing about him in December, noting he and other skeptics of the lockdowns were supposed to meet with Trump, but the meeting never occurred.  BuzzFeed reported it in July

Instead, Trump in the summer hired Hoover Institutionâ€™s Scott Atlas, M.D., a radiologist by training, whose comments about allowing the virus to spread to reach â€œherd immunityâ€ drew harsh criticism from liberal critics, hence strengthening the pro-lockdown forces.

The Post reported that Ioannidis was: â€œlosing the argument over how to combat COVID.â€  â€œAmong epidemiologists, consensus now exists that it was inaction, not overreaction, that helped create the worst public health crisis in a century.â€

The idea of using lockdowns and SAH orders emanated from Santa Clara, CA, due to bioterrorism response plans adopted after 9/11/01.  Gov. Gavin Newsome was the first governor to use lockdowns and so other governors followed, as governors have absolute authority under state emergency management laws to handle pandemics without legislative review.  In other words, lockdowns make it look like the governors are â€œdoing something about it.â€

But according to the second study, reported by the non-partisan free-market- leaning. National Bureau of Economic Research   there are health as well as economic devastations ahead due to the lockdowns.

According to Fortune magazine,  the new working paper — by authors at Duke University, Harvard Medical School, and the Johns Hopkins University business school — and focuses on the almost instantaneous unemployment of millions of workers in March and April.

According to Fortune, â€œthe unemployment rate jumped from nearly the lowest in 50 years to the highest since the current measurement system began in 1948. While it has come down, itâ€™s still at its highest rate since the recovery from the 2008â€“09 financial crisis.â€

â€œTheir main finding: Over the next 20 years, 1.37 million more people will die than would have died without the unemployment shock the pandemic caused, a number the researchers call â€œstaggering.â€ They find also that â€œexcess deaths will disproportionately affect African-Americans.â€ The implied increases in deaths per 100,000 individuals over the next 20 years are 32.6 for African-Americans versus 24.6 for white Americans. In all, about 3.2% more people would die in the U.S. over that span than would have died without the spike in joblessness.â€

The researchers say the lockdowns along with loss of health care coverage to millions laid off   â€œwill impact mortality rate and life expectancy even more severely than predicted.â€

Of course, predicting the future is impossible, but we know from current data that many illnesses are up this past year.Â  Suicides are up, for example â€“and eating disorders.

We now must wait for 50 to 75% of the populace to gain immunity via vaccination before , plus see a drop in new cases, before we get back to some semblance of normal.  But with inoculations going ever-so-slowly and COVID cases and deaths climbing,   and refusal of governors and local politicians to reopen our economy and schools, weâ€™re in for more illness and other societal ailments (i.e., budget deficits and uneducated children) while the liberal media sanitize the failures of the public health bureaucrats continue to put all the blame on Trump.

More at these links:

CDC HAS FAILED THE COUNTRY ON COVID 19

The cure has become worse than the disease was last modified: February 1st, 2021 by Guest Contributor Ken Reid