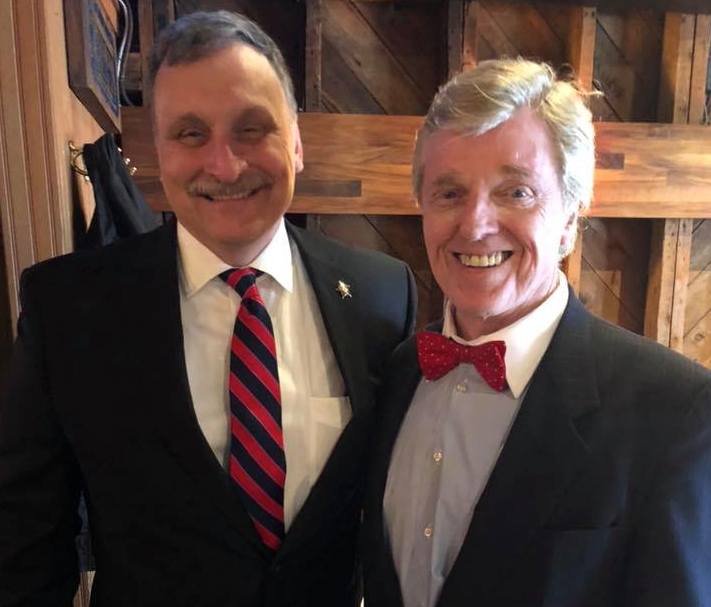 The Curious Case of Chris Harmison: A Republican Running for Sheriff as a Democrat

Chris Harmison is the only Republican running in the Democrat primary.  When I heard Harmison was announcing his bid for Sheriff, it struck me as obvious that he switched parties because he couldn’t win against Sheriff Chapman in a Republican primary.

Harmison has been a member of the Loudoun County Republican Committee for years.  Without taking the honorable step of resigning from the LCRC, Harmison registered to run as a Democrat and immediately courted the support of Democrat Board Chair Randall and Leesburg Mayor Burke.

At a press conference on March 20 announcing his candidacy, Harmison praised Chair Randall, who cheered him on.  He joked about his recent conversion to run as a Democrat and what name to call her, about supporting her wasteful $20 million Emergency Communications Center and about being open to replacing the law enforcement functions of the Sheriff’s Office with a police department that would report to Randall instead of the voters.

After seven years in office, Mike Chapman runs one of the best Sheriff’s Offices in Virginia and one of the best local law enforcement agencies in the nation.  You only need to look at the metrics to see the proof, along with his commitment to continuous improvement.  Crime is down 19% since Sheriff Chapman took office, the best performance of any jurisdiction in the metro area, and 90% of Loudoun’s citizens report satisfaction with the work of the Sheriff’s Office.

Sheriff Chapman runs one of the most fiscally responsible agencies in Virginia, getting the job done every year, exceeding expectations, and still returning unspent money to Loudoun’s coffers – nearly $2.8 million last year alone.

When Randall and others tried to go around the Sheriff last year – spending $150,000 for a consultant’s study of Loudoun’s Emergency Communications Center (ECC), that never included talking with the Sheriff’s Office, and then recommending a $20 million expenditure to throw the current system out and build a new one – Mike Chapman stood up and reminded Randall that law enforcement was his elected responsibility, and that enhancements in emergency communication could be done more effectively if he and the fire chief worked on it together. They did, ECC upgrades are moving forward, and county taxpayers saved more than $18 million of the money Randall was ready to approve.

Our Sheriff’s Office operates nationally-recognized School Resource Officer and DARE programs, as well as a nationally-recognized counter-opioid effort, and is a model agency when it comes to crisis intervention training.  Sheriff Chapman was recently elected to the executive board of the Major County Sheriffs of America and as vice president for homeland security, and he leads the committee for homeland security for the National Sheriff’s Association.

It is no coincidence that Sheriff Chapman has been sought out by both the Trump and Obama Administrations to visit the White House and offer his counsel on law enforcement.  He knows what he’s doing and he’s keeping Loudoun safe.

Democrats are hoping to make gains in Loudoun this year, but what they are encountering are Republican candidates with a strong record of accomplishment and unwavering character.  Sheriff Mike Chapman is one of them.  He has earned my respect over the years and has earned the respect and admiration of Loudoun voters in both parties.

The Curious Case of Chris Harmison: A Republican Running for Sheriff as a Democrat was last modified: March 24th, 2019 by Guest Contributor Sen. Dick Black