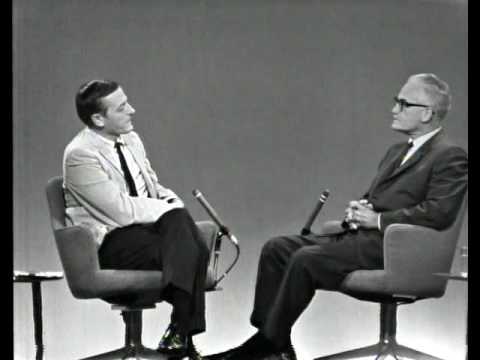 The Death of Discourse

“While I take issue with much of what you say, I tremendously admire the marvelous way you say it.”

Nobody has ever been convinced of conservative values after being accosted by an intellectually deaf Occupy Wall Streeter who simply happens to be draped in the flag designed by Christopher Gadsden.

Apparently not, because that’s nearly the exact approach adopted by many figures within the umbrella of conservative new media. Instead of reserved, hopeful, reasoned advocacy of classical liberalism and the principles contained therein, these figures turn to an endless cycle of soundbite manufacturing, banal hashtags and the character assassination of anyone who stands in their way.

Gone are the halcyon days of Buckley’s ‘Firing Line’, quite arguably the zenith of political public discourse. Americans, in general, simply don’t bother to compare and contrast the views of others to the extent we used to. As a result, we all retreat into our respective political safe spaces, be it Fox News, MSNBC, Vox, or Breitbart. As such, content creators are incentivized to build echo chambers instead of modern-day Agoras.

This problem is bigger than an election, or who is next to reside at 1600 Pennsylvania Avenue. It’s bigger than the Republican Party, the Democratic Party, you, me, — it’s bigger than everything. It is about the death of discourse, and its devolution into shouting matches. We’ve traded quills for clubs, and big ideas for buzzwords.

I wonder if we’ll ever come out of the cave.

Too bad the politicians, parties, Corporate United and their media lapdogs have been too busy jacking their jaws to see they are all about to get jacked up by the POed ‘uneducated’ common people.

There’s a certain elegant discourse to a right cross deftly avoiding the hands holding a CNN microphone. Or the even greater reward of balloting an obnoxious incumbent down for the count.

THE one on the right was the first time I voted and it was partly because I read his book while in college,’the conscience of a conservative’ recommended by the man on the left whom I watched every week…prior to his tv show I read his magazine national review…things were different back then we even discussed principles in public school along with religion…not the crap taught today.

Individual freedom is taken for granted, but a quick review of history shows that it is relatively rare. Our children are being told to embrace their enslavement – it is the global socialist way.

Fundamentally, a good debate is based on facts and reason. Today, fact and reason are rendered useless when the loud voices of screamed emotions overwhelm them. Republicans until Trump were cowed into silence by the shrillness of political correctness – no more and that is good for the future of debates. In the meantime, we still must suffer the screaming Mimi’s.

You just don’t get it, do you?

I think you can put that on a bumper sticker. I would just change the first “you” to “I”.

Republicans have always been good at securing that safe number two spot.

Good point. Even when we win an election, we have to apologize for it. Example: Compassionate
Conservatism as if conservatism isn’t compassionate.

The point and counter-point of debate has been replaced by soundbites and insults. Facts and reason have been replaced with lies and distortion. Honesty and morality is replaced with deception and insincerity. This seems to be the only way to reach the reality TV watching, short attention span culture we have created.

Truth no longer matters if you can yell loud enough and get enough people to listen long enough to your lies. A lie told long enough suddenly becomes the truth, and admiration for a candidate because of their positions is replaced with cult worship of their celebrity, so it no longer even matters what they say.

Our politicians use people because they allow themselves to be used. They promise them the moon and then refuse to deliver (because they never intended to in the first place), knowing that their cult/celebrity status and the general lack of interest/attention of the masses will prevent them from being taken to task for their lies.

That’s why we have the candidates we deserve.

If you can put it on a bumper sticker it probably reflects a result not an opportunity for debate.

And if man were meant to fly, he’d have wings!

The pace and flow of information has drastically increased and humans cannot keep up. Societal changes have eliminated any sense of permanence and the democrats are hard at work destroying what is left of our borders, language, and culture.

Digital preening is the order of the day, ‘Friends’ and ‘liking’ has taken on new meaning, and I can shoot my my mouth off 24×7 on blogs with a pseudonym and don’t have to worry about social consequences (of course that’s expected behavior for a comment section on a forum.)

Kids learn differently, in my day church and school conditioned us to sit down and shut up. Nowadays kids have the attention span of a gnat and schools encourage their diversity, individuality and ‘specialness’ to act out.

Video games teach a pantomime world mastery and popular media offer up ‘blinkies’ to always redirect and maintain your attention.

We are deceived with basic logical fallacies (which are no longer taught) and don’t discern between informed and uninformed opinion (excepting the service I provide for TBE as common sense political Judge, Jury, and Executioner)

We totally deserve the government we elect, and defer to collective (always bad) wisdom that really isn’t.

Haven’t we all noticed that it’s not getting better and the pace is only increasing?

Look around at the party, see all the old farts? Where is the future, where are the kids? Only time I see kids at Republican functions is at Trump rallies.