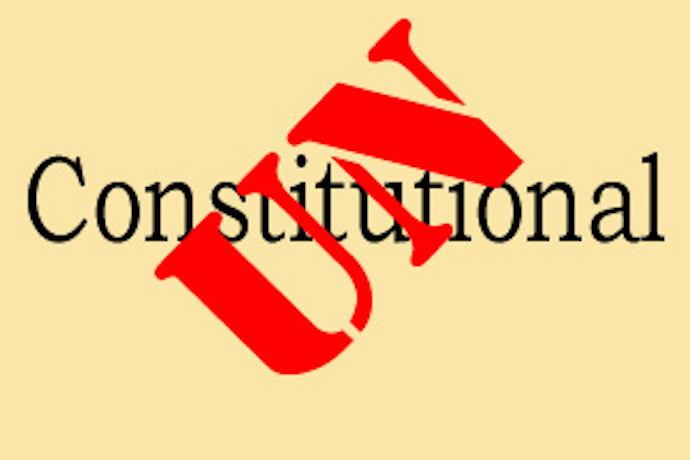 The death of the Incumbent Protection Act

Over a year ago, American patriots led by Ken Adams, Anne Fitzgerald, Matt Tederick and Scott Sayre brought a lawsuit into federal court, the object of which was to remove Virginia code section 24.2-509, otherwise known as the Incumbent Protection Act. This piece of code, a holdover from the Harry Byrd days, allowed for incumbents to determine their nomination method. (For the record, this lawsuit was unanimously endorsed by the Shenandoah County GOP Freedom Caucus, of which I am the chairman).

A few weeks ago, a federal judge agreed that the Incumbent Protection Act is unconstitutional as it violates the “free association clause” of the U.S.  Constitution as it applies to political parties. Virginia is one of the very few states that allowed for incumbent elected officials to choose their party nomination method.  Most states allow for the local parties or committees to choose the method of nomination for a race.

The IPA was passed into law in the 1950s. It was put in there to ensure that Harry Byrd could control the State Legislature by making it all but impossible for any challenger to take on an incumbent. Here is how the IPA works. When an incumbent controls the nomination process, he or she usually chooses a primary, because challengers usually cannot raise the amount of money required to successfully take on an entrenched incumbent. A primary for a House of Delegate race in Virginia can cost anywhere from $75,000 to $200,000 (in Northern Virginia), something that few if any challengers can hope to raise unless they self fund. Conventions are much less expensive for challengers, and more likely to bring out well versed and educated voters. And well educated and informed voters are a commodity that most incumbents fear. And because of federal campaign finance laws that are really little more than a federal Incumbent Protection Act, to run a primary race for Congress or Senate costs millions, depending on the state in which you live.

Well run local Democrat or Republican committees are usually more responsive and receptive to the needs of the voters, something that incumbents sometimes don’t tend to. But if an incumbent can raise $2 million to run a congressional race, he or she likely has no worries as the incumbent knows it’s all but impossible for the challenger to take him/her out. Dave Brat was an exception – but he had little to no chance if then Rep. Eric Cantor, of Virginia’s 7th District, hadn’t abandoned his district. If you want to help restore our democracy, get rid of career politicians. Sadly this part of the Harry Byrd machine existed because politicians on both sides of the aisle like the death grip they have on local elections.

This is not a liberal vs. conservative or Democrat vs. Republican debate. While I am a staunch conservative, if I were a Bernie Sanders supporter and was upset with the way my Democrat legislators were voting, I’d be celebrating this ruling as well. The only real winners under the Incumbent Protection Act were incumbents and the special interests that rule Richmond. And remember that most of our laws are written by lobbyists for special interests. For those of you who think that the legislature needed to kill the IPA, the fact is that in 2016, a bill to kill the IPA was killed in Committee by a liberal Republican from Virginia Beach under the guise that conventions disenfranchise the military. However, since the Republican Party of Virginia has a special rule in place for active members of the military to vote in conventions, this argument is specious. The fact is that professional politicians were never going to give power back to the people. So we the people had to take it back from them.

Most people tend to get worked up the most about hot button issues such as abortion, gay rights, racism, sexism, etc. We should be most worked up about politicians gaming the system so that they remain in office for as long as they want. Whatever your political leanings, every Virginian should be pleased this law has been removed from the books. And thank the great Americans who brought forth this lawsuit.

The death of the Incumbent Protection Act was last modified: February 15th, 2018 by John Massoud

Next up to go is the open primary.

Name the Liberal Republican in Virginia Beach.. Shame has a name.

Is it Republican Senator Bill DeSteph the Liberal Republican or just the Pro illegal immigration Republican from Va Beach?
Or El DeStepho as I call him.