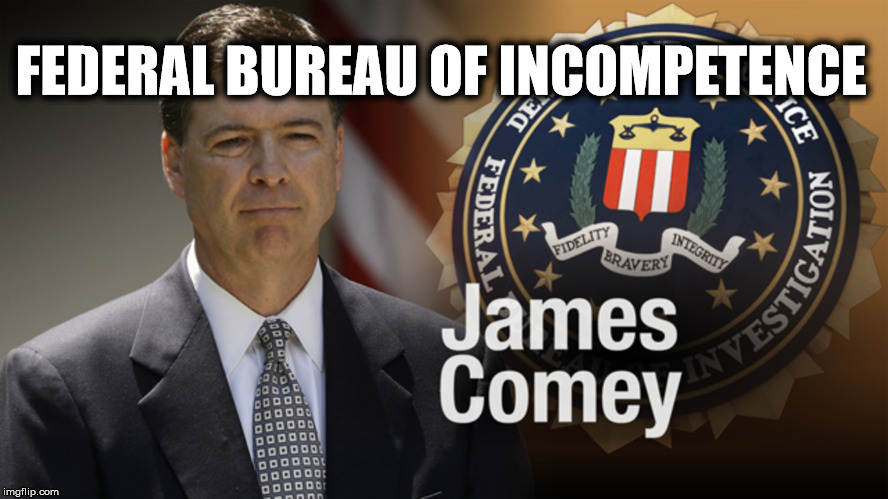 The decline of the FBI

Of all the departments, agencies and bureaus of the federal government, the Federal Bureau of Investigation was considered the least corruptible.  The FBI brought down Al Capone and dismantled the Mafia.  It eliminated the notorious John Dillinger.  It crushed drug cartels and exposed terrorist plots.  How can an FBI steeped in law enforcement successes now be considered for contempt of Congress because of corruption?

The FBI names that come most to mind are Mueller and Comey who led the pack of Obama’s most senior FBI political operatives.  But now we have Peter Strzok who is not only a committed anti-Trump official but apparently pro-Clinton to the point of actively undermining the Clinton e-mail investigation.  (Strozok was fired from the Mueller Special Counsel investigation because of e-mails that incontrovertibly showed his anti-Trump bias.) Between these three, the making of a coup against a sitting president of the United States can no longer be dismissed as silliness.

The truly sad part of the decline of the FBI is that there are many great men and women in the FBI.  To become an agent, you have to be physically fit, mentally stable and legally competent.  The FBI agent corps comes from the best and most educated of the American citizenry, and its professionals have to be quite dismayed about being condemned for corruption from within.  (I say this because my experience with the FBI professionals has been extremely positive.)

It now appears the FBI, along with most federal government organizations, has been corrupted by politics.  Thanks to the Obama administration, the FBI is but another deep swamp creature, in this case living off its illustrious past to blind the public.  I can only hope that the Department of Justice and the Congress will deal harshly with these corrupting individuals and, ultimately, Hillary Clinton with her pay for play schemes.

I close with a well known quote: “A nation can survive its fools, and even the ambitious. But it cannot survive treason from within. An enemy at the gates is less formidable, for he is known and carries his banner openly. But the traitor moves amongst those within the gate freely, his sly whispers rustling through all the alleys, heard in the very halls of government itself. For the traitor appears not a traitor; he speaks in accents familiar to his victims, and he wears their face and their arguments, he appeals to the baseness that lies deep in the hearts of all men. He rots the soul of a nation, he works secretly and unknown in the night to undermine the pillars of the city, he infects the body politic so that it can no longer resist. A murderer is less to fear.”  Marcus Tullius Cicero

The decline of the FBI was last modified: December 4th, 2017 by Dr. Robert Warren

The situation for the Mueller team has just gotten worse. Apparently, his number 2 praised Sally Yates in an e-mail for defying Trump’s immigration ban. This makes at least two anti-Trump people on the Mueller team – and if you count Mueller then there were or are three people out to get Trump. Terrible.

Until I see the political class push for prosecutions, police its own class of people, there will be no hope for tomorrow. And as far as I know, this is not a big topic of conversation at the Republican committees.

It increasingly appears that the organization that brought down al capone is now being run by new members of his Chicago gang. In addition, we have Hillary and Albert Anastasia – birds of a murderous feather.

This has been an intentional action by the Left, going back to the 1920’s, and the days of the “International Comintern”. The United Sates is far too strong to be defeated from without, and the Left understands this. The US can only be defeated from within, and to do that, the Comintern must first destroy the institutions that form the foundation of our free society. Infiltration and control of these institutions is the strategy. Entertainment and the Press. Education and Church. Government at all levels. The Justice System. The Family. The Private Sector economy. The FBI is just one more institution that the Left must either control or destroy, if they are to bring about the Socialist utopia they desire.

This visually represents what I said below.

Probably more accurate is it is the federal bureau of political investigations. That agent who led the Hillary server investigation wasn’t incompetent… he knew exactly what he was doing to make the politicos happy.
While we get to gasp over collusion with the Russians!! That joker at the behest of Obama sent up to Comey the baloney about intent with Hillary’s server. This case was one of the most heinous examples of the swamp. There is nothing about intent in that National Security law to prosecute someone.. gross negligence does it and having your own server is easy as pie to prosecute. You can only imagine what else goes in the federal government when they can’t prosecute someone for that…in tougher cases against politically connected people, why you aren’t going to apply any laws to them if you can figure a way to avoid prosecuting something simple.